WAUKEGAN, ILLINOIS – Storms that tore through the upper Midwest missed the Waukegan Sports Complex and the ECNL Nationals Friday, but managed to break the heat here and help deliver some entertaining matches.

With semifinals now complete, Saturday will bring the three remaining championship bouts (U16, U17 and U18 age groups) and the final matches of this event and the 2011-2012 ECNL season.

Click any of the following links for coverage of Day One, Day Two, Day Three, Day Four or Day Five

(Scroll Down for complete Friday Results)

This was a great advertisement for ECNL and girls’ soccer in general. Huw Williams’ KCFC team was undefeated coming into the match and showed one reason why in the early going, as they are brilliant in building the attack.

Dorian Bailey was running riot down the left wing and Savannah Trujillo is good at shooting and serving from long range. She nearly set up Bailey for an early score but Slammers’ defender Chloe Watson made a vital clearance from the 6-yard box.

Slammers were producing threats of their own, in part through the terrific pace of MacKenzie Cerda, but it was Abby Sieperda who drew first blood for KCFC when she shrugged off a challenge on the left and then beat the goalkeeper 1v1. Bailey then nearly doubled the lead with a brilliant 50-yard run, but her shot went off the post. 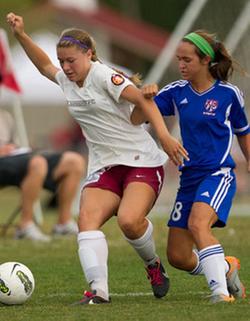 KCFC kept attacking and Trujillo charged down the left and crossed to Bailey. Her shot appeared goalbound but was cleared off the line by Slammers defender Olivia Hazelrigg. Hazelrigg is a defender of the highest quality, combining athleticism, intelligence and skill to really aid her team’s efforts.

Auburn verbal commitment Sammy Salaru is another fine attacking player for Slammers, and she went close after a good run through the middle. The Southern Californians did equalize when Kennedy Kraft crossed from deep left and MacKenzie Cerda met it with a good header to make it 1-1.

Slammers had the best of the end of the half and KCFC avoided more trouble with help from goalkeeper Scout Watson, who comes off her line decisively.

Slammers went on top when Cerda served in a good corner kick and Jessica Wong produced a stunning volley for what would be the winning goal.Early in the 2nd half, KCFC’s Taylor Walker played a good through pass for Trujillo but Slammers’ goalkeeper  Cassidy Rey made the save.  Midfielder Kayla Mills was a warrior for Slammers, winning balls and working both sides of the ball with high intensity.

KCFC kept fighting for an equalizer over the final 15 minutes, but more often than not it was the defender Hazelrigg who stymied their efforts.  Rey also made a couple of good saves and raced off her line at the right times, and Slammers hung on for the win.

Slammers will play Dallas Sting in Saturday’s final. Tatu’s side beat PDA by a 2-0 score in the other semifinal.

Walid Khoury’s side celebrated their semifinal win with a cheer.

These two teams have played some epic matches over the years. Sting won U.S. Youth Soccer national titles at U15 and U16 and an ECNL crown at U15, while CASL won the ECNL title last year at U16. The teams have often crossed paths in the process. And so they met again Friday, but this time CASL ended up with a comfortable margin of victory, putting on a masterpiece performance in beating the North Texas side 5-0.

It’s hard to know where to start when admiring the CASL team. I’ll try with up the middle. Taylor Francis is rock solid in goal, and Claire Wagner is a fantastic defender with good reads and decisive steps to the ball. She also distributes very well. Caroline Brown plays the holding midfield role quite well, always keeping the ball moving and finding the open teammate to maintain possession.

U17 WNT standout Joanna Boyles is a tremendous 2-way midfielder and helps set the tone for a number of very good attacking players including Alexis Shaffer, Alexis Degler, Cameron Castleberry, Paige Reckert and I’m not going to name the whole team, but I could.

Shaffer and Degler are high school teammates. Here is what the two Alexises had to say afterward.

Sting’s Maddy Crabtree nearly answered back immediately but Francis made a good 1v1 save to preserve the 2- goal lead. On the other end, a giveaway in the back gifted Degler with the ball on the left again. She hit a grounded cross that Reckert expertly dummied, allowing the onrushing Boyles to drive the ball home for a 3-0 lead. Shaffer opened the scoring with a terrific 25-yard strike.  In the 2nd half, she started a scoring move by hitting a pass to Degler wide left. Degler then hit a cross that Reckert headed on target, but Sting goalkeeper Miranda Larkin made a reflex save, only for Shaffer to pounce on the rebound and score again to make it 2 -0.

Boyles then crossed for Reckert, but her header was tipped over the bar by Larkin.   Castleberry made a strong run down the right and crossed for Reckert who redirected to Degler who finished well to make it 4-0. The final goal came on a long free kick by Wagner that was volleyed in by Reckert for a final score of 5-0.

CASL will meet Michigan Hawks in what should be a very closely-fought U17 final. Hawks beat Slammers 3-0.