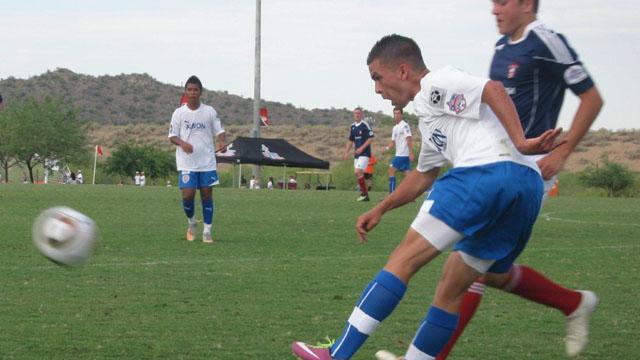 On Friday at the U.S. Youth Soccer National Championships here, the final day of group play was completed, and along with it the full schedule set for weekend championship matches in 12 age groups. U14 and U15 will be played Saturday, with the olders on Sunday.

Following are some feature match reports. You can scroll down for full results, courtesy U.S. Youth Soccer.

U16 BOYS: EASTSIDE FC (WA) 1, ALBION WHITE (CA-S) 0
For both Eastside and Albion, the result of the game was bittersweet because the winner of the battle, Eastside, lost the war.

The game started off quickly for Eastside. Just after the 15th minute, Eastside central midfielder Madison Heck ripped a shot from 30 yards out with so much pace that it was too powerful for the Albion keeper Colin Webb to handle. Luckily, Eastside striker James Molyneux-Elliot was ready and followed up the rebound, sliding the ball past the keeper to put Eastside up 1-0.

Besides finishing the only goal of the game, Molyneux-Elliot demonstrated composure on the ball, turning under pressure with ease and creating holes in the Eastside back line. His assister Heck also was a stand-out player against Albion’s talented and athletic central midfielders, Shane Mahvi in particular. Heck displayed persistent defending and incredible composure under pressure that allowed him to break into the attacking third and play dangerous balls splitting defenders into the runs of Eastside attackers.

The goal was the last chance upon which Albion goalie Webb would allow Eastside to capitalize for the remainder of the game. His next big same came less than five minutes after Eastside scored their first goal. Diving, sliding, tipping, and punching, Webb owned his goal for the entire match.

But this was no easy feat. The Eastside offense was on fire all game long, utilizing quick combination play to beat Albion defenders and get into dangerous spaces on the field. A stand-out Eastside attacker who worked to exploit these spaces was Ryan Harber. He always held good positioning and made threatening forward runs all game long. The Eastside team continued to make numerous attempts at goal, but Webb handled the pressure well.

Credit is also due to the Eastside back line, led by central defender Davis Karaica and outside defender Peter Sokolis. The two demanded maximum effort and performance from their players. It was their leadership that kept the back line compact, forcing Albion to push play to the flanks, making it considerably harder for the Albion attackers to get in scoring position.

Even after halftime, Webb was on his game again. Directly following the 10-minute marker of the second half, Eastside midfielder Harber played teammate Alexander Shane whose shot was just saved off the line by Webb himself.

After this save, Albion began to turn up the heat, with game-changing midfielder Shane Mahvi releasing a shot that hit post. With ten minutes remaining in the second half, Albion, and Mahvi himself, had another attempt at goal when midfielder Oscar Ortega crossed the ball to the head of Mahvi. The resulting header missed just wide.

Mahvi not only positioned himself well in order to make attempts at goal, but also impacted the game in the middle of the field. He was dominant in the air and worked well with midfielder Oscar Ortega to create chances for Albion.

However, despite several set play opportunities for both teams, neither team could capitalize on their chances at goal. So the score remained a 1-0 victory for Eastside.
But this was a result that neither team was happy with. Though Eastside was the victor over Albion in the head-to-head challenge, the two teams were now tied in bracket points. Albion won the tiebreaker with a higher goal differential by only one goal. Therefore, Albion will be competing in the National Championship match on Sunday, while Eastside competes for third.

Albion Head Coach Noah Gins explained that the game was somewhat bittersweet. He said, “It is one of those situations where we need to take a deep breath and regroup. We have a day to get back into the mode to win the championship.”

On Sunday, Albion will compete against Concord Fire Elite, who won their last game 5-0. Although Albion beat Concord on Wednesday 1-0, Albion obviously will be fighting against the odds, as it will be Concord who has the momentum coming off a substantial win. Of the effect this loss will have on the players, Gins said, “This event matures the players so much because they have to deal with the mental side of the game in a way that cannot be duplicated.”

Another advantage for Albion lies in the fact that it is not their first time at USYS Nationals. “We have the experience,” said Gins. “We have won the USYS National League two years in a row, and the National League is essentially [this tournament].” Though the game today was a rough patch, he has faith that the team will be successful on Sunday because they have been here before. 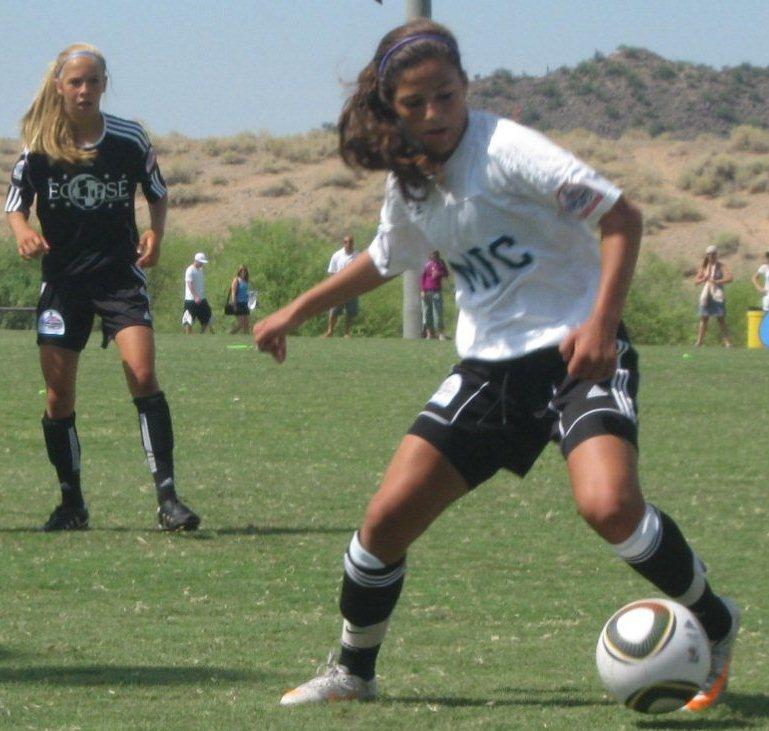 U14 Eclipse v. Match Fit
U14 GIRLS: ECLIPSE SELECT (IL) 2, MATCH FIT CHELSEA (NJ) 2
Not since the day the US Women’s National Team defeated Brazil in the Quarterfinals of the 2011 Women’s World Cup have I seen a game as shocking as this one. The heart, passion, and perseverance Match Fit Chelsea (MFC) showed on the field today really brings to light the quality of the USYS National Championships and made players, fans, coaches, and match reporters alike realize that maybe this tournament has more to offer than just a National Championship title.

The match began much like any other. Eclipse had claimed control of the game early, with four corner kicks in the first 10 minutes of play. Also in this time period, Eclipse had their first true attempt at goal in a one-against-one situation between Eclipse forward Maya Neal and MFC goalkeeper Penelope Edmonds. Edmonds, as she would continue throughout the entire game, saved the shot on goal. Again not 30 seconds later, Edmonds came off her line strong to stop Eclipse forward Kelsey Bogdan’s run at goal.

Edmonds came up big again in the 24th minute when Eclipse attacker Riley Sykes was played in through the seams of the Eclipse defense and released a powerful near post shot, deflected again by the MFC keeper.

Although MFC had a few chances throughout the course of the half, Eclipse dominated the game, and it was only a matter of time before a goal was scored in their favor. Sure enough, at the very end of the second half, Sykes redeemed herself with a ball served in from a corner kick that found the head of Eclipse forward Kayla McCoy. The score now stood 1-0 Eclipse.

This was not the end of McCoy’s threat to the MFC defense, either. Ten minutes into the second half, McCoy performed the notorious flip throw, received the ball back to her feet and ripped an unstoppable shot from outside the 18-yard box, which sailed past Edmonds and into the back of the net, pulling Eclipse forward 2-0.

After the second goal, MFC had trouble getting their feet back under them. Eclipse controlled every aspect of the game, but they had serious trouble getting into scoring position because of the great defensive positioning of the MFC back four, resulting in numerous successive offside calls (and I mean numerous). It was a great defense against Eclipse’s speed up top, specifically Maya Neal. When this defensive strategy was unsuccessful, Edmonds was always there to clean it up. MFC Head Coach Jordan Raper commented that she is “outstanding” and “the best keeper in the country.”

The factor that changed the momentum of the game still remains unclear to me, but in the last five minutes of the game, MFC decided to show up, and show up big time. With barely over five minutes remaining in the game, Carly Leipzig found the ball in MFC’s attacking third and finished with a chipped shot into the back of the net. But the game still was not over.

With three minutes left in play, MFC forward Hana Kerner gave it everything she had with a run down the right flank. Her footwork put her past a defender and then, she shot the ball hard and long. The ball hit the post and bounced into the back of the net. Now the park was wild.

MFC Coach Raper commented that Kayla Jennings was an impact player as well for the New Jersey team. He said, “She has so much heart. To be playing in your third game in this heat and to be making runs from the center midfield is outstanding.”

Although MFC played their heart out until the end, it simply was not enough. The game ended with a score of 2-2, sending Eclipse to the National Championship match. The team from Illinois got a very pubic and high intensity tongue-lashing from their coach as they walked off the field.

I, along with the other spectators surrounding the field, was amazed at the whole-hearted effort MFC committed to fighting back. The team was inspiring to everyone who watched. By no fault of their own Eclipse was dominated in the last five minutes of the game by a team with players whose hearts truly beat as one.

“The other team had so much speed, it really took us by surprise,” MFC Coach Raper said. “But what we showed at the end is what we are capable of. I think if we would have shown that even a litter bit earlier, it would have been a completely different game.”

Whether it be credit to coaches, parents, or their own mentalities, the MFC girls at the least deserve kudos for their perseverance; it is too often that giving up is seen as an easier and more appealing option. They performed at a high level and accomplished a lot in very little time. If it were up to me, MFC would be given a second chance; but sadly, it is not, so all I can say is how lucky I feel to have been assigned this game. So thanks Rob! (he’s my boss)

Although MFC will not be playing in the National Championships tomorrow, Coach Raper explained that this experience is bigger than just this season, but prepares the girls for the future as well. “We are happy to come here and go away pulling back in the game like that and showing how good we can be,” Raper said. “We will continue to get stronger with our roster and we will continue to get stronger with our experience… I am disappointed but happy with the way we came back in the end.”