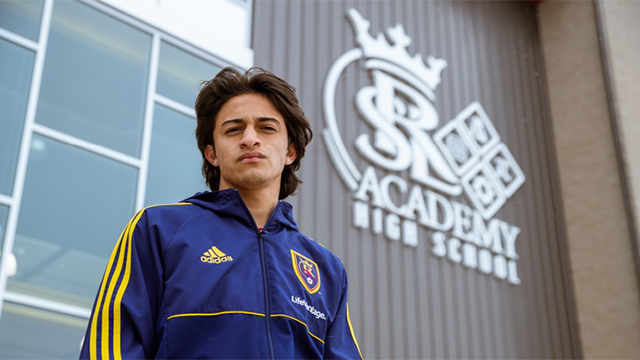 If you played youth club soccer in the El Paso area during the 2010s, there is a good chance you played against Christopher Garcia. The recent Real Salt Lake Homegrown signing loved the game so much that he was playing every day of the week for two club teams during his middle school days, his dad, Joel Garcia, told TopDrawerSoccer during a phone interview last week. But it wasn’t exactly love at first sight.

“When he first started (to play soccer), he was invited by a friend of mine to join a new team,” Joel Garcia said. “He said ‘Hey do you have a son around six years old who would like to play soccer? We are trying to form a team.’ I asked Chris would you like to play soccer. He happily answered yes, I want to play. He had four days of practice and then Chris decided to quit. I asked him ‘why did you decide to quit?’ He said ‘those kids are so selfish. They don’t like to pass the ball. I just want to score goals.'”

He sat out for a year before another coach came calling and asked for Chris to join his new team.  His first club was Pumitas, which was another small step, but it was there that he was seen by the top coaches in the area. Pumitas played against FC Dallas El Paso, an affiliate of the MLS club, in a tournament. FC Dallas won the game, but the coach of the team, Omar Mora, came up to Joel Garcia after the game and said Chris was the best player on the field. He wanted Chris to join his team.

“It was a more competitive team,” Joel Garcia. “Chris went to a higher level there. He played there for four years. During two of those seasons, he was named MVP of the team.”

Cosmos Soccer Academy’s Jaime Quintana invited Chris to join his team too, which might have burnt some kids out, but Chris thrived with the new opportunities to learn from different coaches and experience different responsibilities.

“Jamie was one of my greatest coaches,” Chris told TopDrawerSoccer.

“He offered Chris a spot and a scholarship, so Chris started playing on two teams,” Joel said. “He was practicing three days with one team and the other two days with the other team during the week. And then he was playing Saturday and Sunday.”

Joel said that is when he noticed his son was a very good player and had the talent plus work ethic to go places with the game.

“When he started middle school, he was named MVP of the 7/8th grade team. In high school, he was the Rookie of the Year as a freshman for Eastlake High,” Joel said.

The awards piled up for Christopher Garcia, and Real Salt Lake was about to come calling for the first time. The MLS academy invited Chris out to participate as a guest player during the Generation adidas Cup. Real Salt Lake Arizona coach Rafael Sifuentes was the one to scouted Chris.

Sifuentes used to coach Chris’ older brother at the club level. Back then, Chris was just the little kid on the sidelines kicking the ball around.

“Rafa [Sifuentes] used to tell me, he is going to be a good player,” Joel Garcia said. “Now, I know he was telling the truth.”

Chris was invited to tryout at Real Salt Lake in 2018. He impressed the coaches enough during the try-out that they offered him a scholarship to join the Academy. It was something that FC Dallas never offered to Chris. Joel explained that they did not have family in Dallas and moving Chris there was not financially possible even though FC Dallas offered him a spot with the academy team.

“Moving to Real Salt Lake and having the coaches there, it really helped me,” Christopher Garcia said. “I’m here thanks to them.”

“During Chris’ first season with Real Salt Lake Academy, he didn’t come home,” Joel Garcia said. “When he had summer break, he was invited to train with the Monarchs [Real Salt Lake’s reserve team]. The following Christmas, Chris promised me that he was going to be a professional player. I told him I believed him. He was working hard for his dream.”

The dream of being a professional player starts with the first contract. Real Salt Lake made the 17-year-old the youngest player on the roster only a few weeks after his birthday. That’s not the whole dream though.

Chris said his dad had to fight back the tears when he told him the news.

“I remember hearing my dad crying through the phone,” Chris said. “It was unbelievable for him. It was the best feeling because knowing this was my dad’s dream not only him, it was my whole family's dream and I was the one to accomplish the dream. That I was chasing since I was 10 years old.”

Chris earned his spot on the roster throughout the last two seasons with his play at the Academy, Monarchs and the first team during preseason. Now, he is looking to fight for those minutes for the first team and making that first team debut to keep making his family proud.

Joel wants to be there for the historic moment. He has only had a chance to see Chris play a few times since he joined Real Salt Lake due to the distance from El Paso. He’s hoping the next time he sees him play will be at Zions Bank Stadium.