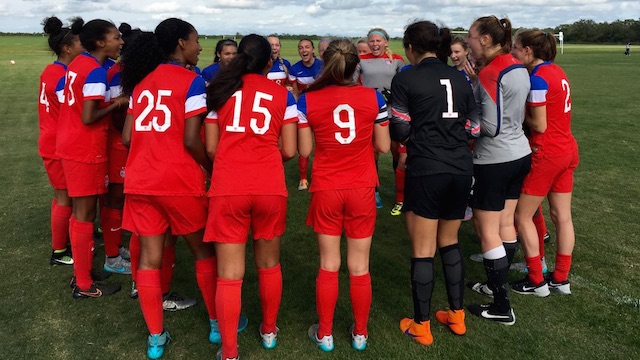 The general shape of the TopDrawerSoccer.com Player of the Year Award presented by IMG is beginning to meld into a discernible form.

The award, which is in its inaugural year, honors the top pre-college amateur American club players’ performances over the course of the 2015-16 season. That of course takes into account everything, from high-flying club performances to standout moments on the national team. Players who aren’t called up are not penalized, but it certainly doesn’t hurt. You can read about the full requirements for eligibility and our panel’s criteria here.

Our first installment looked at the insane years from Mallory Pugh and Elijah Rice, two players who’ve staked convincing claims to the title this year. Our second took stock of Emmanuel Sabbi and Ashley Sanchez. But the race is wide open with a couple months still left to decide the winners before the July deadline.

As we sprint toward May, players’ opportunities to jam their foot in the door are growing slim. Here’s a glimpse at a few more players who’ve put in work this season.

Acosta hasn’t been on the national scene for long, but he’s made incredible use of his last year. Almost exactly a year ago, he made his first major U.S. YNT camp when he was named to a U15 travel roster to Italy in matches against Slovenia, Costa Rica and Croatia. The talented attacking midfielder made such good use of his first major piece of exposure that he quickly became an integral part of the cycle this season.

Meanwhile, Acosta’s Weston FC U16 side is ripping through the Development Academy thanks in part to his exploits in front of goal. When he can actually find time between call-ups, that is. Acosta’s scoring record for Weston FC almost beggars belief. as a 2000 among mostly 1999s, Acosta has 12 goals in eight appearances for club this season. Weston FC has the second-best record in the DA at the U16 age range for a number of reasons, but Acosta is an enormous one.

But his most impressive run of form over this past season - and the biggest reason why he could well take home this award at season’s end - is largely down to his form with the national team. Acosta quickly matriculated up the ladder to the U17 MNT, and the greatest single performance of his young career catapulted his star into the ionosphere.

In the final of the Tournament of Montaigu, the U.S. came from behind to beat host France 3-2 on the back of two strikes from Acosta, including the winner late on. Acosta finished the tourney with six goals from four matches and was probably robbed of the Player of the Tournament award, all things considered.

Furthermore, Acosta is a No. 10. Excited yet? You should be.

The South Floridian has plenty of developing yet to do, but the fact that he’s moved up the ladder so quickly - and done so superbly with his chances - is a ringing endorsement for his year come award selection time this summer.

Laurel Ivory is a prime example of what can happen when a talented up-and-coming prospect without the tallest platform is given a chance.
While Ivory has moonlighted in the ECNL, it’s never been her most prominent club home. The league draws throngs of scouts to each of its showcases. Its playoffs, meanwhile, are probably the single most heavily scouted girls soccer events in the country. Ivory, one of the most talented young goalkeepers in the nation, has never had that benefit. Throughout her career she’s toiled in US Youth Soccer’s National League with her local club Sunrise SC. While the exposure wasn’t quite as immense, it still gave her the chance to prove herself as a top girls prospect at keeper.

She earned her first real national opportunity in December 2014 when she was invited by U.S. Soccer to participate in a four-day Women’s Youth National Team Goalkeeper Camp in California. Alongside 15 other highly regarded keepers, Ivory made a deep impression.

But her big break came this year, when she earned a call-up to the U17 WNT for the CONCACAF World Cup qualifiers. Ivory beat out a talented field to earn the starting spot between the pipes, and she picked up the Golden Gloves award as the U.S. managed to win the tournament. That, it would seem, was her breakout opportunity. The ODP player is now one of the most highly regarded keeper prospects in the entire women’s YNT pool.

All because she was given a chance.