Comments
Family is everything to Jalen Robinson. So when he found a familial atmosphere during his college visit to Wake Forest he knew he had discovered something special.

“I had a conversation with my mom, and I told her about it, and that Wake Forest was the place I wanted to be for the next four years of my life,” Robinson said. “She told me to go wherever my heart desired and I committed right after that.” 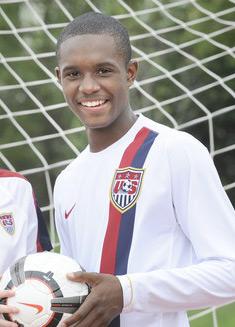 Jalen Robinson
And there you have it.

Robinson, No. 13 in our 2012 class Top 100, is going to be a Demon Deacon – and lucky for them, too. There were other programs on his radar – mostly Maryland and Duke – but Robinson chose the place that felt most special.

“There was just something about Wake Forest that stood out,” he said. “There were a bunch of guys who were very welcoming and I just felt so comfortable.”

Robinson has the kind of ability that will make opponents most uncomfortable. A polished defender, Robinson is a fast and a smooth marker who will also battle by land or in the air. He has exceptional athleticism but is also strong technically.

Robinson has enjoyed stints at U.S. Youth National camp and has been a guiding force for his D.C. United squad of the U.S. Development Academy. His current squad is in first place in the Mid Atlantic Division and headed for the playoffs.

In other commitment news, we bring you new updates on the girls’ side.

Alyssa Alarab (Mustang SC) has verbally committed to UCLA for the 2013 season. Alarab is a skilled defender who comes in at No. 8 in the Northern California & Hawaii Region ranking.

Alarab has already competed in national championship games on the ODP stage in her young career. She had attracted a nice list of programs and was also considering powerhouses like California, Notre Dame, Stanford, Harvard and Santa Clara. 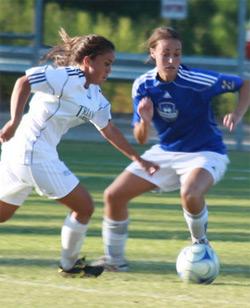 Morgan Brigman (right)
Alex Werner (So Cal Blues) has signed with TCU for the 2011 season.

Tori Gilliland (CFC) has signed with Providence for the 2011 season. Gilliland is No. 20 in the Northeast Region.

Amy Vinopal (Washington Co. Classics) has verbally committed to Duquesne for the 2012 season.

Briana Linares (Eagles SC) has signed with Sacramento State for the 2011 season.