I would describe myself as a big, strong center back who is very dominate in the air. I am very comfortable playing out of the back and am very technically sound with both feet. I am a very vocal leader in the back, and love to get some goals in the opposite box as well.

Every college recruit brings a unique story and background to his or her college commitment. 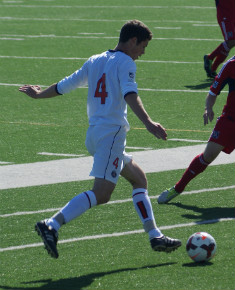 And Hunder Ashworth is no different. A dual citizen of New Zealand and the United State, the Pateadores center back has trained with the NZ national team, and also had a training stint with English Premier League club Fulham.

Ultimately, the presence of a familiar face at San Francisco led him to make a commitment to the Bay Area program.

“I decided to commit to San Francisco for a few reasons. I have known Coach Eddie Soto since I was much younger, so I trust him and love playing under him,” Ashworth told TopDrawerSoccer.com. “SF is, to me, the greatest city in the world, and I would not rather be anywhere but there. I am determined to bring back the glory and dominance to USF that they have experienced in the past, and with the new coaching staff, great things are going to happen. Academically, the school is top notch, and will set me up for my future outside of college.”

His experience training at Fulham also showed him a whole new world of soccer. Ashworth said the pace of game was unmatched, while he played alongside the likes of Darren Bent, Dimitar Berbatov and Martin Stekelenburg.

But his more immediate next step will be helping to restore San Francisco to its former glory. The team’s past accomplishments, while not exactly recent, were a draw.

“The soccer program at USF has so much history which really interests me,” Ashworth said. “The people at USF were able to witness National Titles, which speaks for the quality of the program. The only way the program is going is up.”

As a player I would describe myself as a disciplined defender who understands how to work as part of a unit. My main priority is to limit the amount chances the opponent gets but I also like to get up the field to provide service and support for our attackers as well. Playing with guys that I have been playing with for a long time in the back line, like Brian Kane and Francesca Moore has helped to develop a real sense of a unit rather that individual defenders. Grant Stoneman who came in at center back this season really fits well into our system.

The player development conveyor belt at Chicago Magic continues to churn out Division I talent, with defender Danny Kelly the latest to prepare to jump to the next level this fall.

Kelly’s commitment to Dayton was straightforward – it was the right formula of academics and athletics.

“My decision to commit was based on the high quality education that they offer combined with their great soccer program,” Kelly told TopDrawerSoccer.com. “After attending their camp this passed summer I really got a good feeling about the school and where they wanted to go with the soccer program.”

He was specifically impressed by the way the coaching staff and the team approached and played the game on the field.

“What I like about the soccer program is the style of soccer the coaches want you to play, they want you to control the tempo of the game, knowing when to speed up the game and knowing when to go back and change the point of attack,” Kelly said. “I think the coaches understand me as a player, they can see passed the obvious and I think they will know how to get the best out of me as a player. They know soccer is a thinking man’s game. I think that I will fit well into their system.”

Defender Quentin Sathasivam (East Meadow SC) committed to Adelphi for the class of 2014.