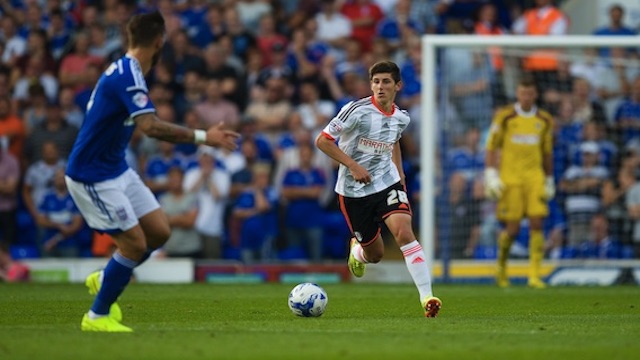 Emerson Hyndman’s drawn-out contract squabble with Fulham finally reached its terminus in June. After reportedly rejecting a contract offer from Fulham earlier in the season, Hyndman signed for Bournemouth when his Fulham deal expired at the end of the 2015-16 season.

The move made sense for Hyndman on multiple levels. The 20-year-old Texas native was largely a rotation player at Fulham in the Championship, and his move to Bournemouth guarantees him at least a shot at immediate minutes in the Premier League under a manager with fresh eyes. Suddenly the U.S. youth national team regular is in position to steal minutes in the world’s most prestigious league.

Hyndman’s transfer didn’t require a fee since his Fulham contract had run out, but FIFA rules mandated Fulham be paid a training compensation fee. Hyndman arrived at Fulham in 2011 and spent three years in its academy before signing a professional contract in 2014. All things considered, Bournemouth was probably happy to shell out the money owed Fulham for helping to establish Hydnman as the player he is today and be done with the transaction at that.

Across the Atlantic, though, dark clouds gathered.

Hyndman first arrived on the international scene in 2008 as a precocious U12 player for the Dallas Texans. After a ripping performance at the Dallas Cup playing up as a guest player, Hyndman was identified by Kenny Cooper Sr. on behalf of Newcastle. He trialed for the Premier League outfit that year, and while he ultimately didn’t make the move just then, he’d been marked. It only took him three more years to make the move to England, only with Fulham this time. And for good.

Hyndman did most of his formative Stateside development with the Texans before spending a season with FC Dallas’ star-studded academy. That precipitated his move to Fulham in 2011, setting the versatile central midfielder earmarked for full U.S. national team minutes on a path to the Premier League in 2016. If that sounds similar to DeAndre Yedlin's path, it is.

That all sets the scene for this month’s move to Bournemouth. Fulham was sent back training compensation for its role in Hyndman’s development. The Texans, who had Hyndman in its system at an arguably more crucial development age, were sent nothing in the deal.

Not a penny. Not yet anyway, and that’s a wider situation the club is desperate to change.

For some time, the Texans have been at the center of the legal fight for pulling some measure of compensation back for youth clubs as it is everywhere else in the world. In the U.S., the players union has historically fought against compensation because, by their reasoning, it limits player mobility and is essentially money out of players’ pockets. Leaning on anti-trust laws, they’ve largely won that battle to date, although the U.S. still does not have a landmark court decision to force the issue one way or another.

Seattle-area club Crossfire is currently awaiting FIFA’s decision on Yedlin’s 2014 sale from Seattle to Tottenham. They should be hearing out of Zurich on that front in July, which will push the ball back into U.S. Soccer’s court to find a resolution. At a meeting in Chicago last month, the players’ union retrenched itself on its position while the youth clubs reiterated their desire to bring some compensation scheme to the U.S., whether that’s FIFA’s or an American original.

In other words, the status quo held.

The Texans, meanwhile, have as much a stake in the conversation as anyone. They’ve been fighting for a cut of former academy star Clint Dempsey’s transfer fees for years, and they have other players out as well. Omar Gonzalez’s 2015 transfer to Liga MX club Pachuca and, more recently, Hyndman’s signing for Bournemouth among them.

Dallas Texans president Paul Stewart says a resolution on the Dempsey issue in particular should be coming soon, although he’s not sure when it’ll hit the docket in Zurich. If FIFA rules in their favor, Stewart’s understanding is that the Texans should pocket about two percent of his $9 million transfer fee MLS paid on behalf of the Seattle Sounders in 2013. That’d put them in line for a $180,000 windfall based on the amount of time he spent in the Texans’ academy.

Since the Texans are a non-profit, like a number of top American academies, every cent of that money would be funneled back into the club’s operations.

“We think that circumstances have changed a lot in the last 10 years in American soccer,” Stewart said. “It used to be that one of the justifications for not paying the youth clubs for training players was that they were getting paid by the player through dues to the club. Today that’s not so much true. Most of the top players play on scholarship, or in the case of clubs like the Dallas Texans, our entire Development Academy is free. Most of the MLS teams have their own youth development programs, so the MLS would benefit in participating in the FIFA scheme as well.”

That’s a major sticking point for the Texans, who can reason that many of the top players at the center of the compensation kerfuffle either didn’t pay for their academy soccer or were on some sort of scholarship. The Texans raise money through things like sponsorships and fundraising to help fund their academy and provide scholarships for players in need. The argument that the pay-to-play system precludes them from pocketing compensation doesn't really fly in this case, from the club's perspective.

As a result, they watch players they helped mold like Hyndman and Dempsey sign without any compensation to help drive their academy forward.

“We’ve got a list. There have been a number of our players this has affected,” Stewart said. “There are five playing for U.S. national teams, so there’s a compensation component related to that as well. It’s something we do try to follow now at this point.”

For now, the Texans and clubs like them are in a holding pattern between scraping up money to subsidize as much of the cost as possible while still pulling in enough money to cover the pricey operations cost of running a top tier American academy. Many clubs have the option of either charging their players to play or folding, and the Texans’ size and reputation has helped them avoid that fate.

But even so, the club realizes it could do even more - larger scholarships, more player subsidies, better facilities - if transfer money trickled down to their ranks as it would anywhere else in the world. Whether or not that happens, with Hyndman or anyone else they produce in the future?

“For a larger club like ours, we’re available to afford (being free), but it’s not easy,” Stewart said. “To implement a FIFA system or our own American system is a way to support youth soccer at the grassroots level. We think it’s eventually something that helps the players and MLS also. In the long run, it’s good for everybody.”