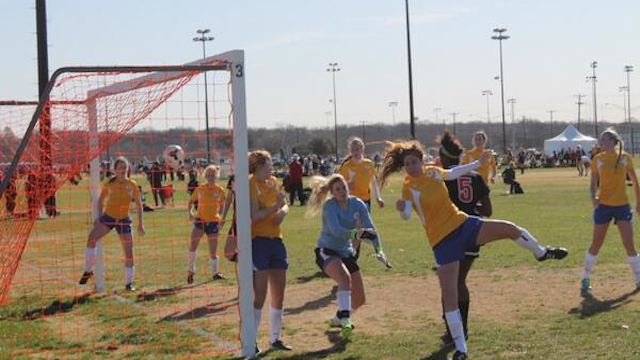 FORT WORTH, Texas — In the space of just a couple minutes, VSI West Florida Flames took their first true adversity of the weekend and smashed it to pieces.

After falling behind early to a talented Sockers FC side, the Flames got successive goals within minutes of each other just before the half en route to an eventual 3-2 win at Rolling Hills Park.

The performance came on day two of the ECNL Texas showcase, which the Flames have made their own personal playground. They dropped Richmond Strikers 3-0 on Friday, and they looked ascendent in the process. While teams battled continued warm but windy conditions in Fort Worth, the Flames found a way to fight through and use it to their advantage.

“We just came in and put our heads down, got another goal and just got the momentum going,” right winger Abby Kastroll said.

The Chicago-area Sockers are stocked with next-level talent. With schools like Baylor (Amanda Hodlund), Duke (Kayla McCoy) and Wisconsin (Jamie Donohue) on the commit list, this was a team to be reckoned with. They looked it early when Louisiana-Lafayette-bound 2015 midfielder Sarah Kozlowski lashed home a strike for a 1-0 lead.

The Flames responded with fury. Central defender Kiera McMeekan got her head to a corner about five minutes from halftime to tie the game, and two minutes later Central Florida commit Jessica Taylor struck for another to put the Flames ahead just before the halftime bell.

“Fairly good performance,” said coach Sam Mitchell. “Signs of the good side. We didn’t play our best soccer at times, but it’s a bit tough with these conditions. Happy with the result and the resilience the girls showed.”

The Flames got their third just minutes into the second half when Kastroll cleaned up a cross that wasn’t cleaned up and roofed it into an empty net. Sockers pulled one back with about 15 minutes to play when McCoy rose to a header off a corner, but they couldn’t pull back a final tying goal.

After a slow start, the game flowered into a fast-paced track meet down the stretch, with the Rush bagging two second-half goals to surge past a talented Colorado Storm side.

The first half was a scoreless affair mostly fought in the middle of the field, but it turned into an end-to-end affair in the second half. The game finally got its first tally when the Rush got a deflected goal off a mad scramble after a corner kick wasn’t dealt with inside the six.

Texas made it double trouble when sub striker Taylor Olson did impressive work inside the Storm 18. She cut loose of her defensive moorings and found a sliver of space about 15 yards out, where she smashed a shot across the bow that tied up the keeper and roped in for a 2-0 edge.

Colorado, which was aided by the dazzling individual skill of winger Margaret Halvorson, pulled one back with less than five minutes left on a goal from Aimee Thorstensen, but an outlet for a point never surfaced.

During Friday’s opening round of games, the Dallas Sting U17s smashed the Hawks 5-0, a surprising result that reinforced Sting’s bonafides after such a comprehensive performance against a one-loss team. Their U16 partners got close to exacting some revenge, but Dallas Sting’s propulsive attack was too much in the end.

The Hawks opened with a pair of goals in the game’s opening 15 minutes, but Dallas Sting fought back and scored four unanswered to take the full points for the first time this weekend.

It wasn’t the first time the Sting have had to claw back. On Friday, they had to come back to steal a point in a 2-2 draw against Washington Premier, and they found themselves in a trailing position again on Saturday.

The Hawks got their first in the opening three minutes on a breakaway goal from Allison Winterfield. They got their second about 15 minutes later on a similar tally from striker partner Emma Tokuyama. With the howling wind at their back, the Hawks looked set up to dominate the rest of the match.

Then Dallas roped itself back into contention with a Julia Lenhardt goal about five minutes from half on a penalty. Just seconds before the ref blew for halftime, Kristen Racz rattled in a cross for a shock tie at half.

With the wind now at its back, Dallas got a stunning 45-yard golazo from Emily O’Neal that caught a gust just after half, and a Meredith Wilson goal about 20 minutes later capped the comeback.

Katelyn Termini scored twice to help Solar Chelsea build a 3-0 halftime lead. Credit FC Virginia for holding the line by closing down Solar in a scoreless second half. Midfielder Taryn Torres was responsible for the buildup to Chelsea’s prettiest goal.

With her team already leading 2-0, Torres angled her dribble to midfield and out of the corner of her eye spotted defender Hannah Webb on her right moving forward. Webb took Torres’ well-measured pass and made no mistake on the straightforward 15-yard attempt.

“Assists are just as good as goals,’’ Torres said.

Keely Morrow provided the assist on the second goal by Termini. The first score by Termini  from eight yards was unassisted. FC Virginia threatened several times in the second half. Gabrielle Johnson had three chances and Allison Maliska fired high after finding only Chelsea keeper Emersen Bribiesca in her path.

A goalie rotation favored by Sporting Blue Valley produced a shutout victory over Lonestar SC. Emily Jones and Megan Swanson routinely rotate by half.It was Jones’ turn to play the second half this time and she faced the heaviest workload.

“I think they were reacting to being down by a goal and they came at us full force,’’ Jones said.

Lonestar turned up the heat primarily with speedy attacker Nakia Graham. But Graham shot high from close range on Lonestar’s best scoring opportunity. The chance grew out of a pass interception by Maya Dokic. Sporting midfielder Grace Kitts, perfectly positioned to capitalize on a mishandled ball by the Lonestar keeper, produced the only goal. Lonestar missed a good equalizing chance in the first half when Katie Werdenberg’s well-struck free kick flew inches over the bar.

After a scoreless first half that saw Challenge SC come up empty on a number of scoring chances, Vanessa Valadez kept plugging and eventually was rewarded for her persistence in the win over SLSG Metro. Valadez, a forward, scored twice in the second half of a 3-0 triumph.

“It was a little frustrating in the first half when I hit the crossbar,’’ said Valadez, who increased her goal total in the tournament to four. “But I just kept pushing and hoping to shake it off.’’

Luck turned for Valadez when her second-half shot ricocheted off a defender and into the net. A pass from Laya Rybicki put Valadez on a path to the net.

Aria Pearlman Morales made it 2-0 with a high kick that gave the Metro keeper trouble in the wind. The ball bounced out of the keepers grasp and into the net. Valadez concluded the scoring, converting on a setup from Adrianna Suarez from 10 yards. Sydney Tedesco provided Metro’s best scoring chances, narrowly missing connection with a couple of high bouncing balls in front of goal.

Jordan Langebartels selected a great time for her first tournament goal. The TSC Hurricane forward ripped a 12-yard right-footed shot into the net only seconds after Concorde Fire had closed to within a goal at 2-1.

“It stopped their momentum,’’ Langebartels said. “Their goal was a wakeup call.’’

Concorde’s Elizabeth Sieracki knifed in a 10-yard shot from right of the target to bring her team within one. Jennifer Byers and Madison Verge notched first-half goals for Hurricane’s 2-0 lead.