With one final, 90-minute performance against Canada, the U.S. U17 Women’s National Team helped erase the disappointment of two years ago with a 1-0 win to capture the CONCACAF Championship.

Several months of hard work paid off in a big way down in Guatemala, and while the team had already punched its ticket to the U17 World Cup, the final triumph left both the coach and team at a loss for words. 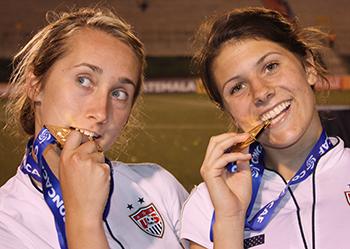 “It’s really hard to describe, but they’ve shown so much heart for these last few months preparing in Spain and now in this qualifying tournament,” head coach Albertin Montoya said after the game. “It’s a special time for the girls and it’s brought them together and you can see their pride in playing for their country. They knew they had to put everything they had into this second half to defend as well as we did and time after time we made plays that were necessary in the back.”

Added central defender Madeline Bauer: “I can’t describe it. It’s such an amazing feeling. I think we are going to really let it sink in and enjoy this.”

The performance in the 1-0 defeat over Canada – by far the toughest test of the competition – served as a microcosm (at least defensively) of the entire tournament, as the U.S. wrapped up the tournament without allowing a single goal across 450 competitive minutes.

Goalkeeper Jane Campbell didn’t have to pull off any spectacular saves in the final, while center backs Bauer and Miranda Freeman were able to absorb everything thrown at them on the way to capturing the regional championship.

Montoya in particular was proud with the clean sheet in the final, against a Canada side that had knocked out the U.S. on penalty kicks back in 2010.

“I have to give credit to our team for defending as well as they did for a good 45 minutes in the second half,” he said. “A lot of credit to Canada, I was very impressed with the way they played, but our girls showed a lot of character and we’ll learn from this and it will only make us better heading into the World Cup.”

Making the defensive performance against Canada all the more impressive was the fact that this was the fifth game the team played in 11 days.

“We have a great recovery program and [strength and fitness coach] Robbie [Elliott] helps a lot getting our legs back under us so it wasn’t that hard, but I am definitely going to need a break after this,” defender Brittany Basinger, who played all but 17 minutes of the tournament, said.

Offensively, the U.S. was limited to its smallest scoring total of the competition against Canada, with just the lone goal from Amber Munerlyn set up by a heel-flick by Summer Green, who finished the tournament with a record-setting 12 goals.

But the final score aside, the defeat of Canada also signals the possibility of what this talented U.S. group might be able to achieve when the World Cup begins on September 22.

“Winning this game definitely sends a message throughout our team and throughout the country that says we are ready to play and we’re getting ready for the World Cup,” Campbell said. “We’ve got a few more things to take care of before the World Cup, but this game was definitely a confidence builder for us.”

When that time comes, this group will be able to draw on this experience and use what they’ve achieved in Guatemala to reach new heights on the international stage.

“It definitely brought the team even closer, which is kind of hard to believe because this is a special team that cares about each other,” Montoya said of the tournament. “But two weeks together in Guatemala has helped us grow as a team and has brought the coaching staff closer as well. It’s a special time for all of us and we learned some valuable lessons in this tournament. [We learned] a few things we need to work on and that will make us better for the World Cup.”