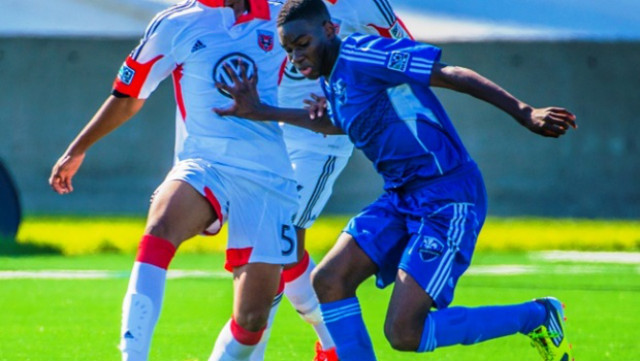 One of the matchups of the weekend pits a non-MLS Academy side against one of the premier talent suppliers in the mid-Atlantic region. Philadelphia Union Academy hosts Bethesda-Olney. The U18 matchup is of particular emphasis as Bethesda is holding on to first place based off of their points per game mark. It will be a big-time challenge for the Union at home.

The Baltimore Bays are traveling up I-95 for a visit to New Jersey and a matchup against PDA. In the U18 age group, PDA trails Bethesda-Olney on points per game, and will look to maintain that gap at the top.

Playing for the first time in 2014, the New York Red Bulls host BSC CT Academy. Red Bulls U18s have yet to lose in the 2013-14 Dev. Academy season, and currently sit in first place in the Northeast Division in both age groups.

The Northeast does serve up an intriguing matchup with the meeting of the Red Bulls and Montreal Impact Academy sides playing across the border in Canada. The Impact U18s lost its first foray into action in 2014 against BW Gottschee and will certainly be eager to bounce back, while the U16s secured full points and currently sit in second place in the division.

There’s a top of the standings clash in the U18 Southeast Division as the Capital Area Railhawks take on Carolina Rapids. The Railhawks must find away to slow down Tanner Roberts and David Lozano, the Rapids duo who have scored 31 goals thus far. Caleb Duvernay is one of the danger men for the Railhawks, scoring twice last weekend.

Match Fit Academy pays a visit to D.C. United on Sunday, with both teams in need of points in order to keep climbing up the standings. Owen Marshall and Daniel Reeves lead D.C.’s U16 scoring charts with 12 and 10 goals respectively.

Fresh off a Monday clash against the U.S. U17 MNT, Seattle Sounders face crosstown rivals Crossfire Premier on Saturday. Sounders U18s are currently four points behind Vancouver in the Northwest Division, while Seattle’s U16s will look to stay on top.

First place in the Northwest, De Anza Force is in action against San Juan SC. Forward Carlos Delgadillo continues to be influential for De Anza, as the Santa Clara recruit has 16 goals in 16 games.

San Diego is the destination for LA Galaxy Academy this weekend, with a game against the Surf on Saturday. Adonis Amaya has been the star of the show for LA’s U18s this season, notching 16 goals in 17 games thus far.

UCLA-bound recruit John Requejo Jr. leads Real So Cal’s U18s into action this weekend against Arsenal FC. So Cal sits in third in the Division, looking up at RSL-AZ and the Galaxy.

RSL-AZ is on the road this weekend, playing non-Division foes Santa Cruz Breakers and San Jose Earthquakes in Northern California.

Colorado Rush welcomes a pair of Texas opponents to Colorado this weekend, with games against Andromeda FC and the Dallas Texans. The Rush are looking to bounce back after a winless swing to Texas last weekend.

Making that trip to Texas this weekend is Sporting KC Academy, where they’ll lineup against San Antonio Scorpions and Lonestar SC. The Colorado Rapids are also on the schedule to travel to Texas for identical games against Sporting KC’s opposition.

One of the premier – and only – games in the Mid-America Division this weekend pits Crew Soccer Academy and Indiana Fire Academy. Indiana’s U18s are third in the Division and can try and keep pace with the Chicago Fire and Shattuck St. Mary’s.