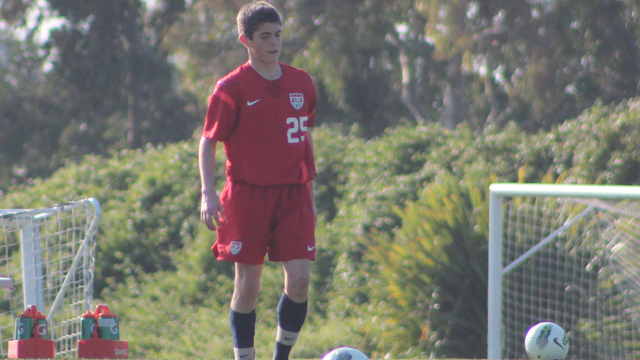 TUKWILA, Wash. — U.S. U17 Men's National Team head coach Richie Williams took his side to the Pacific Northwest to experience a bit of the soccer culture of the area, gain experience against older sides and to show his players that there is a future in the professional game. Their first match on Monday evening at Starfire Sports Complex ended 0-0 with a smattering of cards against Sounders Academy.

During the early feeling out period both club and country realized that this was a match to play through the midfield rather than over it. The United States mainly used their left side to attack Seattle. Left back Edwin Lara (De Anza Force) and left wing Pierre Da Silva (New York Soccer Club) tried to work it in rather than cross.

Seattle intercepted and countered that up the middle. Eric Cavillo (Real So Cal) most often stopped the Sounder attack. Cavillo started the offense the other way. The back-and-forth match did had few early attempts on goal.

Frustration with a lack of results had both sides ratchet up their tackles. Seattle’s Fischer Gallinger earned his second yellow and a sending off with two minutes left in the half. Despite the man advantage, the USA did not attack and played out the half.

It took several minutes for either team to feel the other out. The Red, White and Blue attempted to push the match through Haji Wright (LA Galaxy) more often. Wright switched sides and saw a bit more success. To get him the ball they played the ball through a classic No. 10 in Christian Pulisic (PA Classics).

The second best chance for the Americans came in the 57th minute when Wright found himself free after a quick sequence. Wright, at the top of the 18-yard box, drilled his shot on frame but it went to Seattle’s keeper.

It was the dynamic Pulisic that earned the best chance for the USA. With the ball at his feet inside the six and a third of the goal mouth available, he pushed the shot wide. That wasted 85th minute shot was the last time that the US threatened from run-of-play. Their corners would come to no effect.