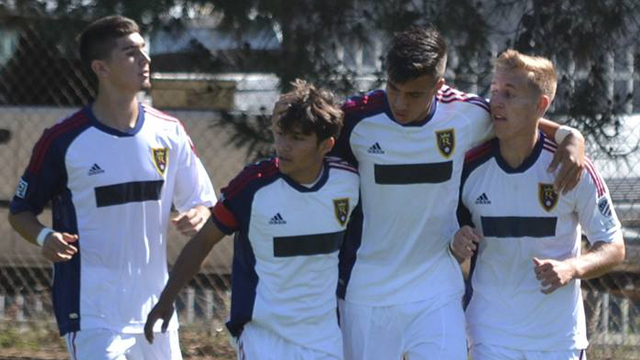 Real Salt Lake AZ continued its roll through the season with a 4-0 win over Chivas USA U18 and a 3-0 win over Chivas USA U16. Eric Carbajal scored twice in the U18 win to bring his season tally to 11 goals. Te Wihongi and Adam Ferguson scored the other two goals. Joshua Doughty, David Villegas and Diego Silva scored in the U16 matchup. RSL remains in first place in the Southwest Division in both age groups.

Arsenal FC topped Strikers FC 3-2 thanks to a pair of goals from Alejandro Gomez and an opening strike from Jonathan Umana. Danny Moreno and Henry Ramirez scored for Strikers in the loss. Strikers answered back in the U16 tilt though with a 5-1 victory. Robert Knights scored twice and Shinya Kadono, Luis Ramirez, and Athur Rietdyk each scored a goal. Strikers U16 remains in fourth place in the division behind RSL, LA Galaxy, and Pateadores.

In Northern California, Santa Cruz Breakers Academy U14 cruised to a 5-2 win over Merced Atlas Soccer Academy on Saturday. Ramiro Palencia and Adrian Rebollar both scored two goals in the win. Victor Rodriguez had the other strike. Brendan Hagood and Hugo Hernandez scored for Merced.

FC Dallas U18 opened up its lead at the top of the Frontier Division with a four-point performance over the weekend. Dallas played to a scoreless draw against Real Colorado on Saturday and then defeated Colorado Rush 1-0 on Sunday. Dallas has a 13-point lead at the top of the division with nine games left on the schedule. FC Dallas U16 also picked up four points over the weekend with a 3-1 win over Real Colorado and a 1-1 draw with Colorado Rush. Ryan Barlow scored twice against Real Colorado to go along with a tally from Caleb Young. Ford Edwards had the lone strike for the visitors.

Mario Ramirez Sansabas scored in the final moments on Sunday to give FC Dallas a 1-1 result against Colorado Rush. Jack O’Brien found the back of the net for Rush. Dallas’ lead in the U16 age group is 11 points thanks to Texas Rush knocking off Houston Dynamo over the weekend. Texas Rush snagged a 2-0 win over the MLS Academy. Jackson Goebel and Brandon Guhl scored for Rush.

Jason Machado scored twice to lead Dallas Texans U18 to a 2-0 win over Lonestar SC on Saturday. Texans are sixth in the Frontier Division. The two clubs battled to a 1-1 draw on Saturday in the U16 age group. Christian Ramos scored for Texans while Nick Marcin struck for Lonestar.

Brady Dalton scored his first goal of the season and Richmond Strikers U18 picked up a 1-0 win over PA Classics on Saturday. Classics bounced back in the U16 tilt with a 4-0 win thanks to a hat trick from McKinley Curran. The three-goal performance came in a 12-minute span late in the second half. Justin Torres scored the other goal.

D.C. United made the loudest statement over the weekend with a 6-1 thrashing of Richmond Kickers in the U18 game between the clubs. Christian Rodriguez scored three goals for United over a nine-minute span that put the game out of reach early in the second half. Jorge Calix, Gerson Umana, and Bashir Hooper also scored. Not to be outdone, D.C. United U16 rolled to a 8-1 win against the Kickers.

Capital Area RailHawks Academy – CASL U18 kept the top spot in the Southeast Division with a four-point weekend. CASL beat Chargers Soccer Club 2-0 on Saturday behind goals from Caleb Duvernay and Bruno Lazaro. CASL needed some magic in the dying moments on Sunday to escape Florida with an undefeated record on the trip. Duvernay scored in the 93rd and 95th minutes to pull out a 3-3 draw for the visitors. Kalvin Kromer scored the other goal for CASL. Christian Boorom scored twice for IMG and Carlos Hurtado had the other strike.