RICHMOND, Va. — The fourth and final day at the 2013 ECNL National Finals meant one thing: crowning four national champions, and wrapping up the season.

Here’s a look at how it all went down:

U14: Strong start key to Force win over PDA

A two-goal burst in the first half was enough for the De Anza Force, handing a tough PDA squad its first and only defeat of the season, a 3-1 win for the Northern California side. 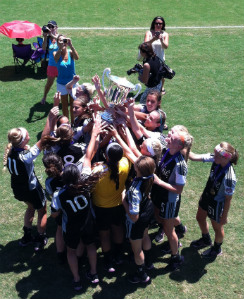 Advancing to the final thanks to a dramatic victory on Sunday, De Anza got the start they needed on a hot summer day against PDA when Kayla Fong opened the scoring in the game’s eighth minute.

From there, the swashbuckling side looked to keep the ball away from PDA’s dangerous attackers Alexa Ferreira, Zoe Steck and Luciana Zullo. With the Force showing little ill effects from Sunday’s marathon win, Samantha Tran doubled De Anza’s lead.

As the first half wore on, PDA adjusted to the Force’s playing style, and Margaret Roughley cut into the lead after a turnover in the midfield to make it a 2-1 game, leaving things finely poised for the second half.

Ferreira, Roughley and Abigail Boyan continued to lead the PDA comeback, turning the screws by playing higher up the field doing well to disrupt the Force’s passing game. Boyan had the best chance of the game to tie, but was thwarted by a great save by Force goalkeeper Alyssa Fagel onto the post.

And with PDA pressing high, De Anza finally broke through and sealed the win thanks to Tran’s second goal of the game on the break.

U15: After early scare, Eclipse Select SC holds on to top Real Colorado

First half goals from Marissa Bosco and Lea Waddle were enough for Eclipse Select SC, as it clinched its first ECNL National Championship with a 2-0 win over Real Colorado.

It could have been a different story, however, as Real Colorado forward Mallory Pugh missed a glorious chance two minutes into the game – which would have flipped the script completely.

“I thought we did enough to do what we needed to do to win the game,” Eclipse head coach Rory Dames said. “We got let off the hook early when [Pugh] got in and rounded the goalie and shot it wide. After that point I felt we settled in pretty well and didn’t really give away a lot."

After Pugh’s miss, it was a very even game – Eclipse notching its first half tallies on set piece opportunities. Bosco drilled home the game’s opener with a smartly taken finish from a corner kick that wasn’t cleared, and the lead double just minutes later in similar fashion, Waddle finishing emphatically.

Real Colorado threatened in stretches in the wake of Eclipse’s goal and Pugh thought she had scored only to see it negated by the linesman’s raised flag. The heat and conditions obviously played a factor, but Eclipse didn’t shrink into a shell, looking to forwards Alissa Gorzak and Zoe Redei to try and add another goal.

Of course they didn’t, but knew the best way to keep Pugh and the rest of Real Colorado at bay was to keep possession, and they did just that until the final whistle.

In what was mostly a stop-start game, neither Sereno nor Slammers could find the back of the net, drawing 0-0 after regular and extra time.

Penalty kicks is always a cruel fashion to decide a championship, but goalkeeper Jalen Tompkins produced a couple of shootout saves to help Sereno secure a national title with a 2-0 PK victory.

“A lot of credit to the Slammers, but a lot of credit to a team that came in a little under the radar a little bit, nobody fancied them, nobody really rated them and they’ve continue to progress and play some good, attractive soccer,” head coach Paul Taylor said of his squad. “They’ve got a great work ethic which gives them an opportunity to win any game they’re in.”

Clear cut chances were few and far between through most of the first half, as players adjusted to both the conditions and playing a fourth game in five days. Sereno could have opened the scoring midway through the first half, as Natalie Stephens smashed a shot onto the crossbar from the top of the six-yard box.

After the break, a second Sereno chance came to Lily Brown, a teasing cross finding her unmarked at the back post, but she failed to get it on target. As extra time neared, Slammers dialed up the pressure and had a couple of chances cleared off the line by some busy Sereno defenders.

But neither side could break the deadlock, though it only came down to penalties after Tompkins, the hero on the day for the Arizona squad, made a top save in the second extra time period, setting the stage to raise the trophy.

U17: PDA wraps up dominant week with 3-0 win over Sting

From the opening whistle, it was clear that PDA was going to do one things – press Dallas Sting, make it very difficult for them to get anything going, and try to dominate possession in the U17 title game.

The tactical approach paid dividends, as PDA grabbed early goals en route to a 3-0 defeat of the Dallas Sting. Early goals from Jessica Vigna and Caroline Chagares helped pave the way, and a goal after the half.

“We figured that if we keep the ball, we’d take their legs,” head coach Michael O’Neill said after the win. “We felt that if we took their legs, we’d take their will to compete…So we felt as long as we kept the ball, and if we lost it, the mentality was to win it back right away and if we couldn’t, we’d organize and take it from there. That was out best defense – keeping the ball.”

That approach nearly led to a goal within the game’s first minute. Pressing high up the field, PDA forced a quick turnover and Rachel Corboz drove a shot just high of goal.

While the Sting struggled to put passes together, PDA was cruising on the ball, and Vigna pounced on a low corner kick to put the New Jersey side out in front. A second goal came shortly thereafter, Lauren Jankowski glancing a header to Chagares who poked home a second goal.

Forwards Emma Heckendorn and Rachel Holden received little service up front for Dallas, and a third goal shortly after the half all but ended the game, and to the delight of O’Neill, the team bought in and executed the plan for 90 minutes.

“We spend time on a game plan, and it’s up to the players to execute it, and they executed it so well all the time,” he said. “And I think the thing that’s most important about this group is that they’re not only a talented group, they’re talented in character. So it’s never been about anybody, it’s about everybody.”

The win capped off an extremely impressive stretch in Richmond for PDA, which won all four of its games, outscoring opponents 11-0.