RICHMOND, Va. — Thanks to the heavy rains that dogged day one, a venue change took place for Friday’s ECNL National Finals, switching play from grass to turf fields.

It resulted in smoother play on the day, as it was now possible for teams to keep the ball on the road. But just like Thursday, it was as competitive as ever. Here’s a look at some of the highlights of Saturday’s action.

After another day of action, four teams are left alive vying for the national title, with the De Anza Force, San Diego Surf, PDA and FC Stars of Massachusetts left in the hunt. 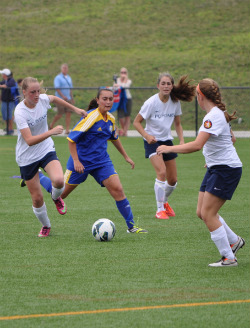 There was little separating any of the quarterfinalists as well. PDA did just enough to beat West Coast FC 1-0, on the back of an Alexa Ferreira first half tally and a stout defensive performance anchored by goalkeeper Evangeline Soucie.

It was a frenetic match, however, as West Coast FC troubled PDA on a regular basis. Attacks Sophia Serafin, Lake Duerksen and Madison Bennett all had looks at goal, only to see some frantic PDA defender keep the clean sheet.

Ferreira grabbed the decisive tally in the first half thanks in part to a fortuitous bounce, as she grabbed a blocked clearance and deposited home the game’s only goal. Serafin came the closest for a second half equalizer for West Coast, rattling the crossbar with a fantastic shot from distance.

It was a similarly close game for FC Stars Massachusetts, coming from behind to defeat Colorado Storm 2-1 to advance. Forward Allison Schlegel provided the game’s opening goal for the storm, and the plucky Colorado side kept the swarming FC Stars attack at bay for the rest of the first half.

Gabrielle Diodati tied the game early on in the second half, breathing life into the Stars, who seized control of the run of play afterwards. And when Elysia Paolillo’s swerving cross eluded the goalkeeper and dropped into the back of the net, the comeback was complete, securing a rematch with PDA on Sunday.

Another banner afternoon for forward Catarina Macario powered the San Diego Surf to a 5-1 win over FC Virginia and into the final quartet. The Brazilian’s hat trick paved the way for the win, with Julie Doyle and Bianca Ferrera also grabbing goals for the Surf.

Matching up with the Surf on Sunday will be De Anza Force, which clung to a 2-1 victory over a strong Solar Chelsea outfit.

With one group game left, Eclipse Select SC has locked up first place in Group A, topping FC Dallas 4-1 in its second match of the National Finals Week.

That result, combined with FC Bucks 0-0 tie with the Colorado Storm, gives Eclipse six points, four ahead of Bucks and clinches first place and a spot in the U15 National Championship.

Eclipse’s win was a bit closer than the score line indicates, but the Chicago-area side attacked Dallas from the opening whistle, as forward Alissa Gorzak setup Marissa Bosco for what could have been the first goal within the game’s first minute, only to see Justice Stanford come up with an important save.

Dallas rebounded quickly, and could have had a lead of their own when Abby Grace Cooper was played in behind the Eclipse back line, but her chipped shot beat the ‘keeper but was wide of the frame.

After the break, with FC Dallas pressing high, Eclipse soon had a third on the counter. Gorzak took an outlet pass near the halfway line, dribbled through retreating FC Dallas defenders and lashed home a left-footed strike from the top of the box.

Forward Ciara Donnelly cut into the lead with an outstanding blast from distance, but Eclipse found a fourth goal to ice the game late in the second half.

One day after finding a way to grab a late equalizer against FC Dallas, FC Bucks couldn’t conjure up the same magic against the Colorado Storm.

Midfielder Julia Panko was once again at the heart of much of the attack for FC Bucks, with her and Gabrielle Farrell engineering most of their dangerous moments on the night.

However, Storm defender Kristin Barbour nearly stole all three points off a 40-yard free kick, her long, looping shot eluding the goalkeeper but smashing off the bar.

In Group B action, Real Colorado put in another strong performance, defeating Concorde Fire 3-0 to take command of that group.

Midfielder Natalie Jacobs’ first half tally was all Slammers would need, topping So Cal Blues 1-0 and advancing one step closer to the national championship.

In what was a tightly contested affair, Jacobs prodded home her goal after a slow start to the match, then nearly had a second straight away, hitting a spectacular volley that hit the crossbar.

So Cal Blues had plenty of chances to equalize, however, before and after the break. UCLA-recruit Anika Rodriguez had several looks at goal, including a one-v-one breakaway that was snuffed out by Slammers goalkeeper Rowan Frederiksen. Rodriguez had a chance to redeem herself later on, beating Frederiksen but not the post as Slammers clung on to the win.

Dallas Sting kept itself in the mix in Group A with a 4-0 win over AHFC.

Meanwhile, all four teams in Group B are tied with three points apiece. West Coast FC scored two second half goals in a 2-0 defeat of Sereno SC, as Hailey Hite and Sarah Chase provided the offense. PDA rebounded from its opening day defeat against Sereno, defeating Real So Cal 4-0.

U17: Sting, PDA tighten grip on the top

Sporting Blue Valley bounced back from an opening day defeat, downing Lonestar SC 4-1, but face an uphill battle to emerge from Group B after PDA swept past Freestate Soccer Alliance 3-0 on Friday.

Forward Dorian Bailey helped Sporting turn the ship around and take a 2-0 lead, with a beautifully finished goal right before halftime. Lonestar wasn’t about to give up either, and Mikaela Harvey’s nice run and finish cut the lead in half.

However, a pair of finishes from Abigail Sieperda helped Sporting Blue Valley pull away.

The Dallas Sting clinched top spot in Group A, as goals from Allison Ganter and Meghan Murphy guided the Texas side to a 2-1 win over San Diego Surf.

However, Slammers FC midfielder Sammy Solaru equalized in the second half, redirecting a cross past Alexandra Latham, a goalkeeper who deserved the shutout on the day. Both side then had a chance at the full points, with midfielder Jesse Scarpa touching it long on a breakaway, and Solaru missing an opportunity with the game’s final whistle.