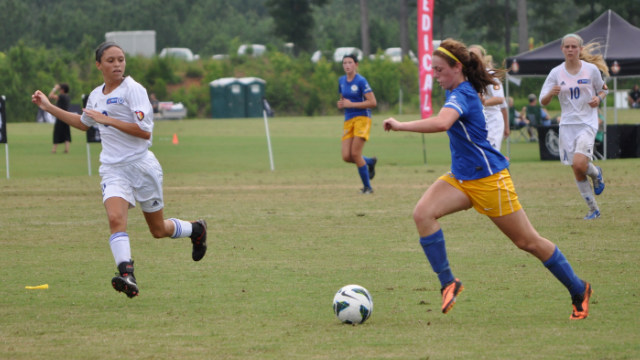 Teams adjusted quickly to puddles and soggy fields, rising up to meet the challenge of that, combined with trying to get the best of some difficult competitions.

See which clubs enjoyed a strong start to the ECNL National Finals:

With the U14 age group playing a knockout competition to crown its National Champion this week, a handful of the top U14 teams enjoyed strong starts to their campaign in Richmond. 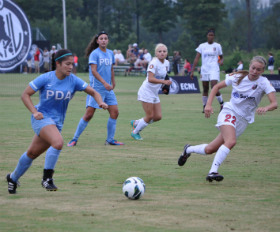 San Diego Surf took down the Colorado Rush 7-2, thanks to a five-goal outburst from forward Catarina Macario. A quickfire double right out of the gate in the first ten minutes provided a cushion that the Surf wouldn’t relinquish against a Rush side that was no slouch on the day.

The Rush had plenty of chances and looked dangerous on several occasions despite the lopsided score line. After the Surf’s second goal, forward Civana Kuhlmann had an open look in the six-yard box, only to see her shot stuffed by Surf goalkeeper Savannah Madden.

While Madden came up big on several occasions, Macario had a hat trick before the break, and added a fourth goal to make it a 5-0 lead. Kuhlmann eventually would cut the lead to 5-1 on a tidy finish, only for Macario’s fifth of the game restoring the five-goal advantage.

The Rush would score again when Rebekah Burton found the back of the net, but the Surf added yet another goal right before the final whistle to make it a 7-2 final. The Surf will take on FC Virginia on Friday, which defeated FC Dallas 1-0.

Another U14 squad that managed a solid first-day win was FC Stars of Massachusetts. Goals from Gabrielle Brummett, Samantha Newyman and Jenna Barnes powered the offense in a 3-0 defeat of Charlotte Soccer Academy. Anchoring the squad’s back line was Tessa Abbott, Hannah Reiter and Greta Watkins. FC Stars take on the Colorado Storm on Friday, which defeated Crossfire Premier 4-3.

The run of a play was a bit closer than the score line might suggest, a strong performance from Solar Chelsea midfielder Taryn Torres helped her side pull away for a 3-0 win against Carmel United.

Little separated the two side for long stretches of the first half, but a burst of pace in behind the Carmel United back line by Solar’s Kennedy Munson took her in on goal, and when she was hauled down, earned a penalty kick. Torres stepped up and calmly slotted the shot home to put the Texas club up 1-0.

Neither side scored again until after the break, when an early goal doubled the lead for Solar, and a nice run from Torres setup MacKenzie McFarland for a back post header, rounding out a nice opening day for Solar.

An unstoppable performance from U.S. youth national teamer Mallory Pugh inspired Real Colorado to a 6-2 defeat of the Dallas Texans.

Pugh accounted for all six goals on the day for her Colorado side, tallying five times and earning a penalty kick that buried in the victory. Madison Haley scored a pair of consolation goals for the Texans.

Through the game’s first 20 minutes, it looked like it would be a close, back-and-forth affair. Haley actually opened the scoring in the game’s first five minutes, tapping home a low cross. But Pugh answered with two goals of her own, each time dancing through the penalty box to avoid an array of Texan defenders.

After Pugh pushed Real Colorado out in front by a 2-1 margin, Haley answered again. But that was all the offense Dallas mustered on the day, and when Pugh won a penalty kick late in the first half, that cued the opening of the floodgates.

In other U15 action, a late headed equalizer by FC Bucks midfielder Julie Panko salvaged a 2-2 draw against FC Dallas.

Panko enjoyed a dangerous morning shift, running at defenders and hitting the crossbar during the first half. Bridget Galen helped FC Bucks open the scoring, as her scintillating run down the right flank and resulting cross was turned into FCD’s net for an own goal.

Niki Rider provided the equalizing tally for FC Dallas, and shortly into the second half defender Valiree Morris bundled home a set piece to hand FCD a 2-1 advantage. And just when it looked like the lead would stand up, Panko headed home a dangerous cross to snatch a point.

U16: Sereno takes down PDA in tight matchup

A second half goal from Haley Adams secured the full points for Sereno SC against a talented PDA squad.

Natalie Stephens opened the scoring on a breakaway in the first half, before Jenny Haskel’s second half penalty tied the game, setting the stage for Adams’ strike from just outside the penalty box to settle the result.

In what was an even game for long stretches of the match, PDA poked and prodded through midfield, possessing the ball through Montana Sutton, Gianna Bustamante, Elizabeth Kinkler and forward Taylor Racioppi. But the back line anchored by center backs Brooke Denesik and Elizabeth Poblete held firm in front of Jalen Tompkins, the only goal conceded Haskel’s penalty that Sutton drew.

And when Adam took a low, driven shot to the bottom right corner of the goal, just eluding goalkeeper Elizabeth Hill, Sereno held on for the massive victory.

In other U16 action, midfielder Leah Mohammadi’s early first half tally was all the scoring that Slammers FC would need on the afternoon, edging Dallas Sting 1-0.

U17: Sting holds off Slammers challenge as PDA rolls

Coincidentally, in the first of two meetings between the California and Texas clubs, Dallas Sting nearly coughed up a two-goal lead en route to a 3-2 victory against Slammers FC.

Defender Delanie Davis grabbed the winning goal after the Dallas Sting saw its 2-0 lead vanish in the second half. After overwhelming Slammers FC in the first half, thanks in large part to the play of forward Emma Heckendorn, UCLA recruit MacKenzie Cerda led the charge after the break.

Cerda tallied early after the half, collecting the ball in the box and smashing home to cut the lead in half. She then got on the end of a well-worked team goal, tying the game – however, Davis rose up to provide the three points for the Sting, with a late game-winning goal.

Lonestar SC was able to provide plenty of trouble for PDA, but the talented New Jersey side eventually was able to pull away for a 3-0 win. Lauren Jankowski, Katelyn Walters and Jessica Vigna provided the goals, setting up an important clash against Freestate Soccer Alliance on Friday.

The Maryland squad also picked up three points on Thursday, as Imani Dorsey converted a second half penalty and Casey Martinez forced an own goal in a 2-1 victory over Sporting Blue Valley.