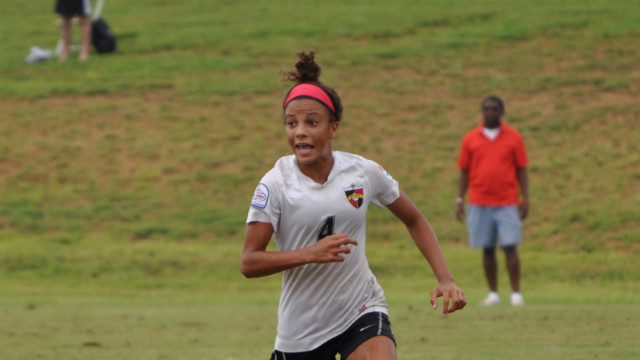 RICHMOND, Va. — It’s not easy to stand out in a talented field during Thursday’ opening action at the 2013 ECNL National Finals.

A pair of five goal scorers managed to do just that, as players had to not just cope against some of their talented peers, but with extremely soggy conditions throughout the morning and into the afternoon.

Here’s a look at ten strong performances from Thursday’s action:

D Elizabeth Poblete, Sereno SC U16: Up against a talented attacking PDA side, Poblete was one of many players up and down the Sereno spine to enjoy a good game. Only a penalty kick stood between her side and a shutout. Poblete also made a crucial second half block on a shot that could have been the tying goal.

MF Taryn Torres, Solar Chelsea U14: The attacking midfielder notched a goal and an assist, and could have had much more, forcing a couple of quality saves from the Carmel United goalkeeper.