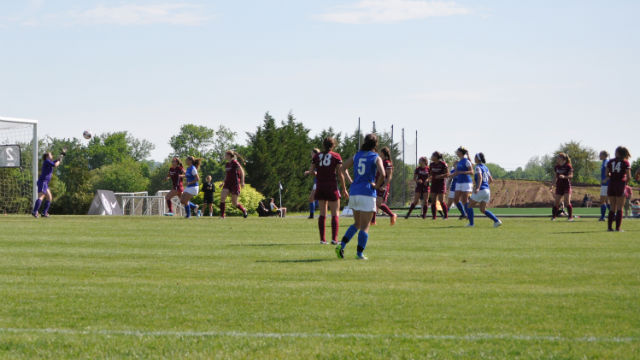 SOMERSET, N.J. — Despite playing the third game in three days, players were able to show their quality on the sunny fields in Northern New Jersey.

It marked the final time ECNL clubs congregated prior to the June playoffs in Seattle. Here’s a look at the some of the action from Monday.

Two clubs at the tail end of strong regular season campaigns duked it out in New Jersey, with FC Stars of Massachusetts holding on for a one-goal win.

Slammers attacker Natalie Jacobs didn’t take long to open the scoring, as she was in the right place at the right time to head home a rebound that looped over goalkeeper Julia Schneider and give the California side a 1-0 lead.

The lead lasted around thirty seconds however, as a pile driver of a free kick from Alexa Elworthy found the upper corner of the Slammers goal, as FC Stars tied the game.

From there, the Slammers defense struggle to cope with the dynamic forward runs of FC Stars’ attack. Forward Kathryn O’Brien was in particular menacing form when it came to slipping in behind the defense, though wayward finishing kept her off the score sheet with a could of first half opportunities.

Beth Kamphaus eventually made one count for the Massachusetts side to give them a 2-1 lead right before the halftime whistle.

A goal from Gabriella Carreiro shortly after the half extended the lead to 3-1 for FC Stars, which appeared to be in complete control of the game. Slowly but surely the Slammers side, behind Jacobs and Kiana Palacios, searched for a goal to narrow the deficit.

They would get it from Jacobs via the penalty spot, but that would be it for the day, as Schneider made a couple of sharp saves to secure the full points.

A last-minute goal from distance off the foot of Samantha Miesemer turned a draw into a win for Albertson Fury, completing a comeback and helping the New York side edge a close one against SC Del Sol.

First half saw SC Del Sol jump out in front thanks to a goal from forward Lauren Crenshaw, and the attacker nearly had another tally shortly after scoring.

A day after losing a close encounter against a side from California on a set piece, Eclipse Select bounced back emphatically with three second half goals to top San Diego Surf.

In a game that was more evenly matched than the score line might suggest, Zoe Redei scored three times in the second stanza to round out the scoring.

Eclipse forward Alissa Gorzak had an early look at goal on a breakaway, but Surf goalkeeper Hanna Deweese smothered the opportunity. The Surf looked dangerous themselves, as they looked to spring the pacey Taylor McMorrow down the Eclipse flank.

The breakthrough for Eclipse came when a corner kick was bundled home, giving the Illinois side the edge before the break.

After halftime, Eclipse eventually pulled away, as Redei scored all three her goals – first from a penalty kick, the second poking home a loose ball from a corner, and then finishing a breakaway opportunity.

The battle between East Coast and West Coast clubs was a tight and tenacious encounter, with little separating the two sides.

Midfielder Jennifer Ramirez’s goal was the only one between two tightly contested teams.

Dangerous chances were limited in the first half. Maryland forward Nia Dorsey found space on a couple of occasions in the Strikers box, though her final shots never seriously challenged Striker goalkeeper Siena Ruelas. Best chance of the game in the first half for either side came on a Striker corner kick, as a failed clearance nearly led to the game’s first tally.

Ramirez eventually found the winner, while Maryland United couldn’t find an equalizer, as they were missing the impact of high-scoring Kia Rankin.

On a windy day set pieces were sure to play a factor, and three goals from corner kicks paved the way for San Diego Surf’s win against host side PDA.

Sasha Stephens scored a hat trick as the Surf overcame a pair of goals from Taylor Racioppi.

From the opening whistle it looked a very different picture, with PDA’s Elizabeth Kinkler and Racioppi both rasping the Surf crossbar with impressive strikes from distance.

However they would rue those missed chances when Sasha Stephens headed home to open the scoring. A corner kick wasn’t cleared and was sent back out to the wing, and the cross back in found the head of Stephens in a crowd of bodies to make it a 1-0 game.

Stephens doubled the lead minutes later from another corner, as the delivery into the box pinballed around in the six-yard box, eventually popping up for Stephens to send into the back of the net.

Racioppi cut into the deficit with a drive from 25 yards out to make it a 2-1 game. The Surf would get another goal, once again from a corner kick, when center back Anja Koehler headed home to extend the lead to 3-1 before the half.

PDA had its chances to cut back into the deficit, as Racioppi was everywhere in the final third, while Paige Monaghan made numerous runs down the flank, Kinkler looked to make something happen and Jennifer Haskel fired a shot wide of the frame.

Eventually, Stephens would get her hat trick, finishing a through ball to make it a 4-1 game, while Racioppi tallied again, barreling onto a loose ball and slotting in her second goal.

Eclipse looked the more likely of the two sides to score in the opening minutes of the game, as Channing Foster and Janeece Ader looked to beat Delco goalkeeper Kelley Mitchell, who made a couple of smart saves early on.

That set the table for Poarch’s goals, which were nearly identical: the speedster wriggled her way behind the Eclipse defense and tucked goals in past goalkeeper Radhika Patel.

Brynn Miller tapped home Eclipse’s goal from a set piece to cut into the deficit, but her and the rest of the attack couldn’t find a way past Mitchell.

Wrapping up the weekend with three wins in three games, a second straight shut out and two goals from Tanika Roach secured the win for Match Fit Academy, as it heads into its final three games of the ECNL regular season.