RICHMOND, Va. – After a night to rest and recuperate, the top players from ECNL clubs in Virginia and Maryland wrapped up the Virginia Player Development Program Sunday morning.

With one game already under their belts, play was a touch more crisp and fluid on a chilly and overcast morning at Striker Park, as players had one more chance to impress. 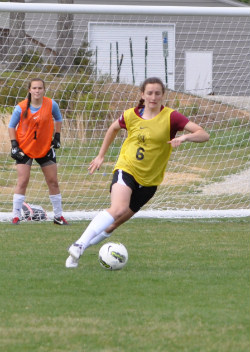 A commanding performance from Team One, which picked up goals from outside backs Grace DeGooyer and Meghan Flynn, guided their team to a second win in two days.

Neither side managed to find the back of the net before the half – Team Two struggled to break through the energetic pressing of Team One, with center back Andi Sullivan snuffing out most of the fires when things came close to goal.

Midfielder Sydney Arnold nearly broke the deadlock in the first half when she hit the post, one of Team Two’s best chances of the day. Casey Martinez, one of the more dynamic players on Saturday, switched to a left back spot and wasn’t able to have as much influence in the final third for Team Two.

Flynn finally broke the deadlock with her third goal of the weekend. After playing as a forward on Saturday, she switched to left back, and bombed forward to open the scoring with a nice right-footed finish inside the box that curled past the goalkeeper.

Team One looked the more likely of the two sides to score again, with midfielder Eliza Doll pulling the strings in the middle of the park, feeding speedy forward Tyler Lussi on a number of occasions. On the other side, Morgan Reuther was among the attackers aiming to tie things up, but found herself swarmed by the opposing defense whenever she got close to goal.

However, DeGooyer doubled Team One’s lead to round out the scoring in similar fashion to first tally, as Cali Hutson's slipped DeGooyer in behind the back line, and she finished calmly to make it a 2-0 lead.

Two second half goals from Christiana Davey helped Team Four turn the tables on Team Three a day after dropping the opening game on Saturday.

It was an evenly contested matchup of the two teams, with Team Four enjoying a slight advantage in possession led by the midfield play of Clarissa Kirsch-Downs, while Team Three looking to hit on the counter attack through U.S. U17 WNT forward Mia Hoen-Beck. The McLean forward did miss a first half chance, hitting side netting with the goal gaping early on in the game.

After reaching halftime with Team Four up 1-0 thanks to a goal from Kirsch-Downs, Davey got the first of her two tallies from a set piece. Bailey Cristian got on the end of a service into the box, and her cross was deflected into the path of Davey by goalkeeper Katelyn Jansen, leaving the goal scorer with a simple tap-in.

Hoen-Beck didn’t let the lead last long, as she lurked and combined up front all game. She atoned for the miss with a calm finish to tie the game at 1-1, working well with club teammate Megan Degrafft in the buildup.

Davey restored the lead for Team Four in similar fashion. Jansen’s clearance fell to Kristina Diana, who found Davey in the box to nudge their side back in front. Diana later had a chance to add to the lead, but her shot hit the crossbar.

Late in the second half, Hoen-Beck was one-on-one with goalkeeper Ryan Jones, but Jones rose to the occasion and made a nice two-handed save on Hoen-Beck’s shot to preserve the win for Team Four.