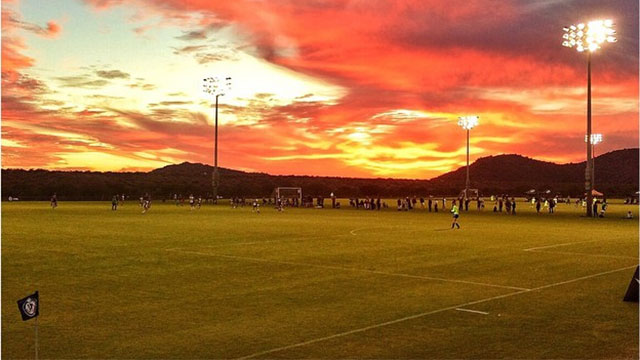 No. 15 TSC came out flat to start in the opening minutes, but turned it on after 10 minutes to cruise to the victory.

No. 7 Virginia came close in the second minute when forward Susanna Weisskopf lofted a shot from outside the box off the post, but fell behind just eight minutes later.

TSC and Arkansas commit Nayeli Perez threaded a through ball perfectly to the feet of fellow future Razorback Taylor Malham, who easily beat the keeper for the early lead.

TSC controlled player after the Malham goal, collecting chances in the 20th and 22nd minutes before capitalizing again at the half-hour mark.

Perez was involved once more, slipping in behind the Virginia defense and rifling a shot far post to extend the lead to 2-0.

TSC almost added a third goal before halftime, but Perez drilled a shot off the post.

Virginia was stymied the rest of the way, unable to create many chances in the TSC end.

Superb goalkeeping from the Rage’s Claire Abele prevented No.12 Charlotte from earning more than just a point Saturday afternoon.

The Rage took the lead over nationally-ranked Charlotte in the 30th minute when midfielder Vanessa Mejia took a pass in the box and finished beautifully to the side netting.

It was all Charlotte after, blasting shot after shot at Abele, who stood tall until just past the hour mark.

Midfielder Rachel Schleicher, typically a U14 player for Charlotte, evened the score when she poked home a cross on the dive in the 69th minute.

Charlotte continued on the offensive for the final few minutes of the match, but was unable to find a winner.

The match was back and forth throughout, but there was no winning goal to be found between the two top-20 ranked teams.

No. 16 Sporting got on the board first just seconds in to the match when Saint Louis commit Alyssa Seitzer’s pass across goal found forward Payton Seymour for the easy finish.

No. 7 Concorde equalized on the stroke of halftime when forward Gabriela Rivera finished under the arms of keeper Emily Jones.

Concorde struck again just three minutes after halftime through midfielder Kalli Vogel, who corralled a loose ball and deflected the ball past the outstretched hands of Jones.

Sporting responded almost immediately and in similar fashion to their first goal.

Forward Bailey Childers linked up with Missouri State commit Morgan Hensley, who calmly slotted home the equalizer from inside the six-yard box.

Both teams created good scoring chances in the final half hour of the match, but couldn’t put one away.