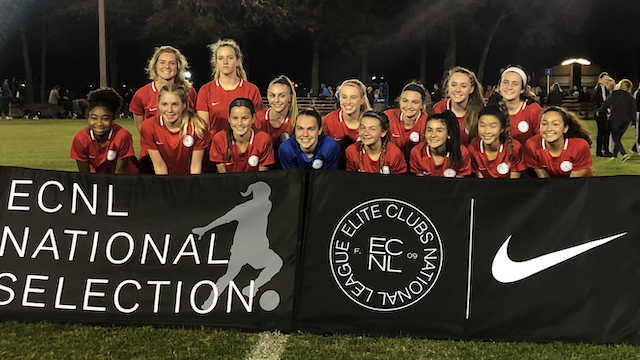 During ECNL National Events in 2020, TopDrawerSoccer is asking certain players to provide journals from the event. Pittsburgh Riverhounds standout wrote the first journal from the ECNL Event in South Carolina.

Challenge SC’s Courtney Koehler provided a journal from the National Event in Houston in February. She documents the three-day event as well as playing in the National Selection Game in front of countless college coaches and scouts.

Today is the first day of the Texas ECNL showcase 2020. I woke up at 7:30 AM to get ready to watch my team play at 10:00. I had a restless night of sleep knowing that I’d be playing in the National Selection game tonight. I’m bummed that I can’t play with my team today, but I know they will do well.

I just finished watching my team play against Tennessee Soccer Club ECNL U17. It was so hard watching and not being out there with them. We ended up tying 3-3 and we had so many chances to win.

At 4:30 PM, I left to go over to check in for the National Selection Game. I am both nervous and excited at the same time to play. I had many role models on my team to look up too and have played in the Selection Game before me. Lorelai Stramrood, Maile Hayes and Nadia Cooper are all amazing players that I am fortunate to call my teammates.

The other day I found out I was going to start the game at right back and I have never played that position before because I have always been an attacking mid, so I can not wait to see how the game is going to go. At the start of the game we walked out with younger players and it was crazy to see how much they looked up to us and how big of impact it was for them to see us play.

Playing outside back in the beginning of the game was a little nerve racking but I got a hang of it towards the end. The second half I started in attacking mid which was nice because that is usually where I play. We, however, ended up losing 4-1, but we had a lot of opportunities to score. After the game my friends Maile, Morgan, Ava and Lorelai came up to me and congratulated me. It was crazy seeing how many people and college coaches attended the game and how surreal it was. What an experience this opportunity was for me and the players I played with and against. It was an amazing opportunity to play with the top players in ECNL!

This morning I was able to sleep in because my game isn't until 4 PM. Once I got up I watched the replay of my National Selection game from last night. It’s shocking to see how many people were there last night and how intense it was. I was glad I was able to see how I played in the game and if I needed to make any improvements on how I played. After finishing watching the game, I rolled out my legs and stretched because of how sore I was from the previous night’s game.

Today we are playing against SLSG-MO ECNL U17 and they're supposed to be a really good team. They made it to the Final Four in the playoffs last year. It was nice to be back with my team after playing with players I did not know. In the game I was able to connect more with my teammates than the Select game because I am used to playing with my friends. The game was a very hard fought battle and my team gave full effort and ended up winning 3-0! I even got an assist from a corner and a goal. I also got to play against the coach who coached me in the National Selection Game. After the game, I went home and took a shower and ice bath and rested for the rest of the night to get ready for my last game tomorrow.

Today I woke up and had peanut butter and honey toast for breakfast. After that I went to Cryo because my legs were really sore and tired from the past two games. After I finished my cryo session, I did the NormaTec leg recovery to get my legs ready for the game at 3:30 PM.

My coach, Chris, gave us a talk about how he was really happy about the way we played yesterday and how we should mirror that effort that we had yesterday in today’s game. You could tell that everyone was ready to get this game over with because of how tired and how hard everyone had worked this week. When the game started I knew this was gonna be a long game because there was not any energy in the game like the games before. The other team scored two goals on us in the game, but we didn’t give up and ended up scoring one. We lost 2-1 and it was a difficult game to get through. At the end of the game my coach told us we had a pretty good weekend and we get to have off of practice tomorrow to rest and recover.

Looking over the past three days I had a pretty good weekend, but I learned there are some areas that I did well in and some areas I need to work at to get ready for National Playoffs this summer. Being in ECNL has taught me valuable lessons and how to be strong and push through tough moments in life. I will always remember playing in the National Selection Game and playing against the top teams in ECNL.