ECNL Preview: Only an appetizer 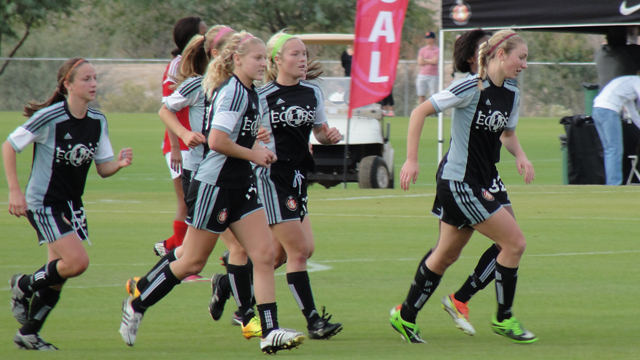 There are a number of teams in action this weekend, but it feels like a simple appetizer prior to the main entrée. With the first ECNL National Event of the season on the docket for next weekend in Phoenix, the games all feel like a warm-up before the big show at Reach 11 complex.

San Juan Soccer Club puts its perfect record on the line this weekend with a game against De Anza Force. San Juan is 6-0 on the season and only conceded three goals while scoring 19.

Michigan Hawks take on rivals Vardar on Saturday in the Hawks’ final game before the break for high school. Outside of showcase events, Hawks are off until April following this weekend’s game. Of the four reported results this season for the Hawks, the Michigan team has only let in three goals thanks to a tenacious defense and solid goalkeeping from Maciah Lipsey.

It’s a battle of astronomical events when FC Wisconsin Eclipse hosts Eclipse Select Soccer Club on Saturday. The latter Eclipse has enjoyed a strong start to the season with a 6-2-2 record.

CASL is playing under the lights on Friday with an 8 p.m. kick off against NC Fusion. CASL topped NC Fusion 3-2 in the first meeting this season back on Sept. 6. Robin Pollard scored twice for CASL in that game. Brynn Donnelly had two assists for the winning side. Brooke Bingham and Montana Heinbach scored for Fusion in the loss.

Eagles Soccer Club takes on San Diego Surf on Sunday in a matchup between second and fourth in the Southwest Conference. Eagles continue to rely on the scoring exploits of Tara McKeown who is up to 11 goals on the season.

FC Dallas takes on Texas Rush on Sunday in a Texas Conference matchup. FC Dallas is 7-3-1 on the season and trying to climb up the table. FC Dallas beat Texas Rush 3-1 last week in the first meeting of the season between these two teams. Allison Lawrence scored for Rush in the loss.

West Coast FC and Slammers FC battle on Saturday in the Southwest Conference. West Coast sits in fifth in the conference after only securing four points for its last three games. Slammers sit in third after beating West Coast last month in the first meeting of the season between these teams. Lexington Magliarditi scored both goals for Slammers in the win.

Colorado Storm hosts Colorado Rush in the quest for state supremacy. Storm leads Rush in the Colorado Division standings by three points, but Rush has a game in hand. This is the first meeting of the season between these teams.

D’Feeters Soccer Club gets another shot at knocking Dallas Sting off its pedestal this weekend. The two teams played last Saturday with Sting walking away with a 3-1 win. Jordan Harr scored twice in the victory. Sting sits in first place in the conference with a 7-0-1 record.