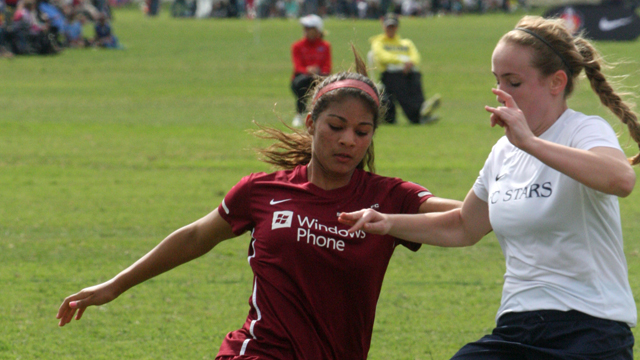 VSI West FL Flames (Brandon) ended the season on a high note with a pair of commanding victories. The Florida squad topped Orlando City YS 6-2 on Saturday thanks to a pair of goals from Meme Morgan. Peyton Smith, Hannah Roth, Meredith Manson, and Lauren Evans also scored for VSI. The two teams met again on Sunday, and VSI came out victorious 4-0 behind goals from Manson, Morgan, Smith, and Addison Ura.

At the Colorado Event, the Colorado Storm defense held strong once again with only one goal conceded in three games. Storm finished the regular season as the top seed in the Mountain West Conference.

For a full recap of the U14 Inter-Conference Showcase in Colorado, click here. 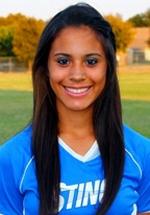 Crossfire Premier kept its hopes alive of a conference championship over the weekend with a pair of wins. Crossfire recorded 3-0 victories over Pleasanton Rage and MVLA. Asia Brisco and Holly Rothering scored in the win over the Rage. The shutouts were the eighth and ninth of the season for goalkeeper Natalie Dierickx.

Taylor McMorrow scored the lone goal and Slammers FC defeated Real So Cal 1-0 on Saturday in a battle between the second and third place teams in the SoCal Conference. The win was not enough for Slammers to take over the second spot, but it did close the gap with two games remaining. Slammers capped the weekend with a 2-0 win over Strikers on Sunday. Alyssa Rocha had a goal and Olivia Khoury had an assist in Sunday’s result.

Olivia Bagby scored twice and Dallas Sting held onto a 2-2 draw against FC Dallas to keep the undefeated conference record alive. Niki Rider and Valiree Morris had the goals for FC Dallas. Stefani Doyle had both assists for Sting, which ends the regular season with games against AHFC and Challenge SC in two weeks. FC Dallas ended the weekend with a 1-0 win over TSC Hurricane. Madissen Lewis had the lone goal thanks to an assist from Caylon McMillan. Valiree Morris had a standout performance on the day at defense to help with the shutout.

Penn Fusion SA claimed a six-point weekend with wins over PDA and World Class FC. Haliegh Echard and Megan Giannopoulos scored for Fusion in a 2-1 win over PDA. Marissa Sheva and Taylor Ziegler scored on Sunday in a 2-0 win over World Class FC.

East Meadow FC also picked up a pair of wins over the weekend, which kept the New York club in the playoff hunt. East Meadow defeated Scorpions SC 2-1 on Saturday. Shannon Kelly and Monique Polanco Arias had the goals for the winning side. Carly Baggott had the tally for Scorpions.

A pair of 1-0 victories helped Real So Cal move into the fourth spot in the SoCal Conference standings. Real So Cal used a goal from Courtney O’Brien to top Slammers on Saturday. Taylor Ayers had the assist on the lone goal. O’Brien and Ayers linked up again on Sunday in the 1-0 win over Eagles SC. Real So Cal sit in one of the final wild card spots with two games left in the regular season before a trip to New Jersey for the next Showcase.

San Diego Surf moved into the fourth spot in the national standings following a pair of wins over the weekend. Kyra Carusa and Pilar Torres scored for Surf on Saturday in a 2-0 win over So Cal Blues. Jessica Morales and Carusa had the goals on Sunday in 2-1 win over West Coast FC. Reema Bzeih had the lone goal for West Coast FC.

Kristen Killion had four goals in a 7-1 win for TSC Hurricane over D’Feeters Soccer Club on Saturday. TSC also notched a 3-0 victory over FC Dallas. TSC wraps up the regular season Mother’s Day with a fixture against Solar-Chelsea Soccer Club. Hurricane has already clinched the second spot in the Texas Conference.