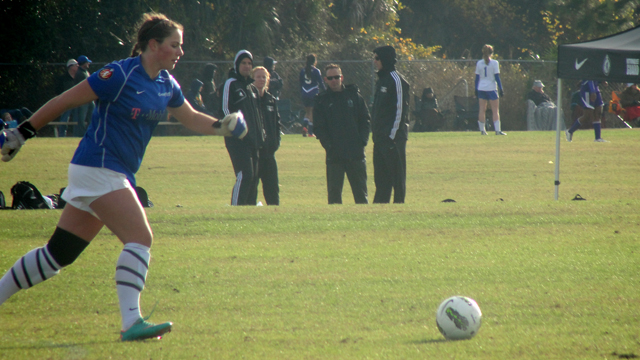 SANFORD, Florida – The conclusion of the ECNL’s second event of the season gave a couple of teams a fitting conclusion to a stellar weekend in Florida.

Washington’s Crossfire U17 saw one streak come to an end early on Sunday but the squad still remained perfect for the event with a four-goal second half explosion. Also, FC Dallas’ diligent midfield and tough defense kept the Texas club perfect at the event.

Check out scores from all of the games on Sunday

Still perfect, but streak is over

Crossfire Premier U17 defense and standout keeper Emily Boyd, a California recruit, started the 2012-13 ECNL season with a 376-minute shut out streak, which came to an end early on Sunday against St. Louis Scott Gallagher.

Arkansas commit Taylor Sancegraw scored 16 minutes into the game on a well-placed shot from distance. Sancegraw doubled the lead for Gallagher five minutes later when she picked off a deflected pass 35 yards from goal. The attacking midfielder raced toward goal and finished with precision despite a last-second challenge from a Crossfire defender.

Sancegraw for the most part looked unstoppable in the first half with a dynamic first step and a prying eye at the holes in the Crossfire defense. She made the most of her damage when she dropped in behind the strikers and picked up the ball with space to run. Fellow Arkansas commit Nicole Ortega provided the target play for SLSG, which allowed her teammate to shine during the early morning clash.

The 2-0 halftime lead looked nearly insurmountable given the lack of forward movement Crossfire showed in the opening 45 minutes, but the halftime speech from head coach Richard Reece lit a fire under his squad and the tides changed.

Behind a virtuoso performance by Arizona commit Calisse Crisler, Crossfire scored four goals in 20 minutes to improve to 5-0-0 on the season with a 4-2 win.

Crisler scored the first and second goal for the Washington club. Emily Crichlow and Arizona commit Sierra Bliginer added the other two goals in the shootout.

Florida State commit Ari Spelios Hudson was also stellar for the Washington club. The outside back moved into a more advanced role in the second half and ended up setting up two goals for Crossfire with some splendid services.

Despite the disappointment of coughing up a two-goal lead in the final game, it was not a terrible weekend for SLSG. The Missouri club pulled off a very impressive 2-2 draw with Lonestar, one of the top teams in this age group, on Friday.

Check out scores from all of the games on Sunday

Ciara Donnelly’s goal midway through the first half was just enough for FC Dallas U15 in a 1-0 win against Michigan Hawks on Sunday. The Texas club ended the event with a perfect 3-0-0 record.

Niki Rider sent in Donnelly behind the defense with a great through ball. The speedy striker raced in and just did enough to get her shot over the keeper and into the net.

The Dallas club settled into the match with ease thanks to the standout play of midfielders Caylon McMillan, Trinity King, and Addison McCain.

The trio dictated the game with McMillian pulling the strings as the attacking midfielder. The 15-year-old had a couple of chances to put the contest out of reach, but her shots both drifted wide of the goal in 1v1 situations with the keeper.

Hawks had some positive movements going forward, but the FC Dallas defense was tough to crack with its physicality and speed. Outside backs Jada Holmes and Jaylin Finney did a good job slowing down the forwards from the Michigan club.