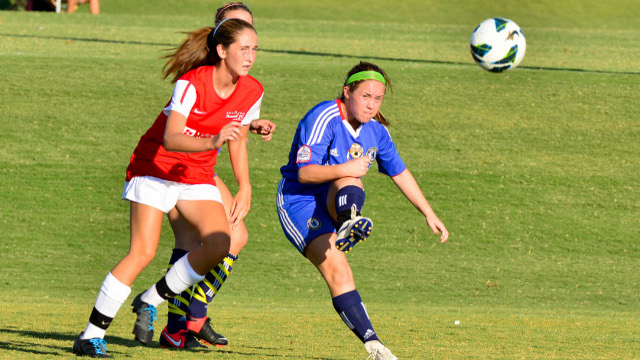 Over 140 teams descended on Phoenix, Arizona last weekend for the first ECNL event of the season. More than 30 college coaches were in attendance to watch the hundreds of elite players from all across the nation play three games in three days.

There were a number of memorable performances from the competition with a few hat tricks and strong defensive performances highlight the way.

The youngest age in the ECNL only had 10 teams in Phoenix. 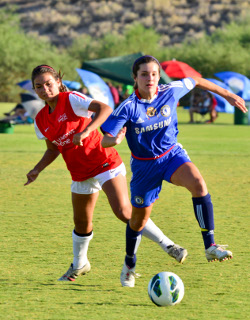 U16 Sereno SC vs. Arsenal FC
(photos by Darla Sipolt)

Colorado Storm also made a statement in the games in Phoenix. The Storm claimed six points for its first two games and pushed its shutout streak to four games. Forward Allison Schlegel led the attack with three goals and two assists.

Madison Haley and Haley Berg continued their torrid scoring pace for Dallas Texans with five goals between them in the first two games at the showcase, but it was only enough for the Texans to secure three points.

The top squad from the Texas Conference dropped the first game in Arizona to Eclipse Select 3-2, but bounced back on Sunday with a 3-0 win over Real So Cal. Berg and Haley have scored 15 of the Texans’ 17 goals this season.

San Diego Surf, the top team in the SoCal Conference, started the showcase with a 6-1 victory over Atlanta Fire on Saturday. Both Nicole Morris and Dana Dalton had two goals in the lopsided victory for the Southern California club.

Dallas Sting put an end to Surf’s undefeated run with a 5-1 thrashing on Sunday. Sting improved to 2-0-0 at the event with the win. Kayla McKeon, Savanna Jones, Cyera Hintzen, and Olivia Bagby scored for Sting in the 4-1 win over Sporting Blue Valley on Saturday.

Jordyn Cunningham scored twice for Mustangs SC in the first two games at the showcase to lead the Northern California squad to two victories. Cunningham first found the back of the net in a 1-0 win against Slammers FC on Saturday and then added another tally in a 3-0 win against Sereno Soccer Club on Sunday.

U.S. U15 Girls National Team forward Anika Rodriguez had a goal and an assist for So Cal Blues in their 2-1 win over Dallas Sting on Saturday. Rodriguez followed that up with two goals against Mustang SC on Sunday in a 2-0 victory. The #24 player in the TopDrawerSoccer.com Top 150 for the 2015 graduating class has four goals on the year already.

Fellow youth national team standout Samantha Bruder also had a good weekend in Phoenix. The forward for Real So Cal scored a goal in the 2-1 win over CASL Chelsea Ladies on Sunday. Paige Fecske had the other goal for Real So Cal. The Southern California squad drew 1-1 with TSC Hurricane in its first game at the Showcase.

In one of the highest scoring games of the Showcase, Lonestar SC and MVLA played to a 3-3 draw on Sunday. Lonestar’s Katie Glenn scored twice in the contest to push her season tally to five goals. Claudette Lassandro had the other goal for the Texas club. A trio of goal scorers led MVLA: Noelle Lara, Jayme Hughes, and Michelle Maemone. The Northern California club won its first game 2-1 against Vardar. Emma Wangsness and Alexandra Walker had the goals in Saturday’s victory.

San Diego Surf, the top team in the SoCal Conference, made quick work of opposition on the first two days at the ECNL Showcase in Phoenix. Surf won its first game on Saturday 6-0 over Atlanta Fire. Forward Kyra Carusa had two goals in the win. On Sunday, Surf topped Dallas Texans 3-0 behind goals from Abigail Callahan, Brittany Doan, and Jessica Morales.

CASL Chelsea Ladies started the weekend well with a 4-1 win over Texas Rush in their opener. Midfielder Kenley Sigmon had two assists for the North Carolina club. CASL could not top the host side in its second game though, and ended up with a 2-0 defeat to Sereno Soccer Club. It was the first loss of the season for CASL.

UCLA commit MacKenzie Cerda scored her first goal of the season on Saturday in a 1-0 win for Slammers over Mustang SC. Then she scored two more on Sunday to help Slammers beat Sporting Blue Valley 2-1. After scoring 17 goals last season, it was only a matter of time before Cerda got off the snide in 2012.

Northwestern State commit Kailee Hervey scored twice over the weekend for FC Dallas to help the Texas club secure four points for its first two games. Hervey’s first goal came in a 1-1 draw with Strikers on Saturday. She found the back of the net again on Sunday in 3-1 win over Colorado Storm. Tahlor Lyman and Chelsea Billups had the other goals. North Carolina commit Sarah Firstenberg had two assists in the game.

Anna Allen, a Mississippi State commit, scored three goals in two games on Saturday and Sunday to lead Birmingham United to four points from two games. Allen found the back of the net twice in a 2-0 win over Arsenal FC on Saturday. She had another goal on Sunday in a 1-1 draw with Eagles Soccer Club. Mississippi commit Addie Forbus had two assists in the two games. Sara Smeltzer, a Liberty commit, had the other assist.