ECNL Recap: Getting some revenge 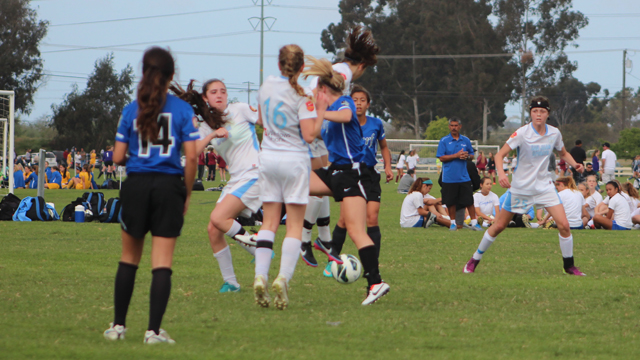 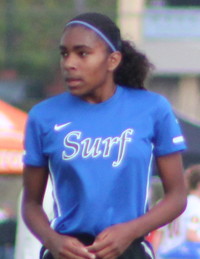 West Coast's Sophia Serafin found the back of the net twice to push her season tally to 23 goals. Lake Duerksen had a goal and two assists in the game.

The teams meet again next weekend in San Diego.

For more scores from the U14 action this weekend, check out the recap of the Inter-Regional Event in South Carolina.

TSC Hurricane kept its spot in the playoff picture with a wild 3-2 win over Challenge SC on Sunday. Kelli Keller, Allison Hurd, and Reagan Whitlow scored for Hurricane in the win. Emily Kaestner and Amy Nguyen had the goals for Challenge SC. Hurricane SC is in third place in the Texas Conference with three games left on the second. A win over FC Dallas next week would push the Oklahoma club into second place.

Heat FC (Las Vegas) jumped back into the wild card race with a 4-1 win over Utah Avalanche over the weekend. Lexinton Magliarditi had two goals and an assist in the win. Emily Martin and Cienna Rideout also scored for Heat FC, which picked up its first win since October.

Out in Southern California, Real So Cal cruised to a 4-1 win over Arsenal FC to keep hold of its second place standing in the conference. Hannah Adler, Kyle Danforth, Emily Joe, and Lynsee Voss scored for Real So Cal in the win. Makenna Gandara, Viviana Villacorta, and Julia Pedati had the goals.

Lonestar SC capped its regular season with a 1-1 draw against D’Feeters Soccer Club on Saturday. Sophia Acevedo scored for Lonestar SC thanks to an assist from Katie Glenn. Lauryn Bruffett had the goal for D’Feeters off an assist from Camille Studebaker. Lonestar is hoping the one-point is enough to keep one of the final spots in the Champions League wild card standings.

Dallas Texans remain top of the conference with a 2-1 win over Dallas Sting on Saturday. Emily Bates and Brittany Crabtree had the goals for the Texans. Bates also contributed an assist – her 47th point of the season. Texans cap the regular season with a game against FC Dallas on Wednesday.

Despite the absence of leading scorer Tegan McGrady (playing with the U17 Women’s National Team in Costa Rica), MVLA still pulled off a 2-1 win over De Anza Force over the weekend to retain the top spot in the national standings. Paulina Llamas Bringas and Shaelan Murlson Brown had the goals MVLA; Brown also contributed an assist. MVLA still has six games left on the schedule so keeping the top spot will not be easy, but the club will enjoy the return of McGrady next weekend.

Sheridan Street nabbed a hat trick and Freestate Soccer Alliance rolled to a 3-0 win over Bethesda SC over the weekend. The Syracuse commit used assists from Madaelna Boccio and Casey Martinez to notch the three-goal day. Street leads the team with 10 goals on the season.

San Diego Surf topped Strikers FC 2-0 on Saturday behind goals from Courtney Coate and Alexandra Ocon. Jordyn McNutt and Abigail Callahan had the assists. Surf remains in the top spot in the SoCal Conference following the victory. Surf, as a club, ended up sweeping Strikers in every age group in ECNL competition over the weekend.

Like in the U16 age group, Dallas Texans claimed a 1-0 win over Dallas Sting on Saturday to remain above the Sting in the conference standings. Chelsei Soto scored the lone goal of the game.

Ohio Premier Eagles remained in the top spot in the national standings with a six-point weekend. The Eagles defeated Carmel United on Saturday 2-0 and then topped Ohio Elite Soccer Academy 1-0 on Sunday.

Dallas Sting got its revenge in the U18 age group with a 1-0 win over Dallas Texans, the top team in the Texas Conference, thanks to a goal from Texas Tech commit Meagan McCullough.