DEL MAR, California – The second day of the ECNL National Event in San Diego featured a number of high quality contests, as teams battled for position with playoffs on the mind. 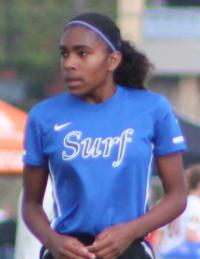 Perhaps the best game of the day came from the U17 age group where Real So Cal topped SC Del Sol (Arizona) 3-2 in a thrilling, hotly contested affair.

Check out a recap of some other featured matchups from the top girls club soccer league’s fourth National Event of the season below.

Brittney McKinney only had one goal this season before Saturday, so she may have been an unlikely hero in a high-scoring contest.

But the 16-year-old forward put herself in the right spots on numerous occasions and was rewarded with a pair of goals including the eventual game-winner.

McKinney opened the scoring right before half, as she turned the center back and hit a beautiful shot the far post while falling to the ground. McKinney’s effort snuck in the goal, and gave the SoCal Conference side the lead at the break.

USC commit Allie Bruder doubled the lead shortly after half, and Real So Cal looked to be headed to an easy victory.

However, SC Del Sol had other plans and switched the momentum in the game in the early stages of the second half.

“It felt like they came out in the second half with a game plan that put extreme pressure on the ball, and it worked,” Real So Cal head coach Kristi Walker told TopDrawerSoccer.com. “I think about halfway through the half we applied the pressure back and found a way to win.”

LSU commit Jorian Baucom benefitted from the chances for SC Del Sol with a pair of goals during a seven-minute stretch in the second half. Baucom’s speed and power allowed her to create space against a tough Real So Cal defense.

Baucom’s double pushed her season tally to 16 goals in 10 games, but it would not be enough for the Arizona team to snag any points, as McKinney got the last laugh. Following a long free kick, McKinney raced onto the ball and touched it around the keeper for the game-winning tally with only seconds left on the clock.

Real So Cal will try to close out a perfect 3-0-0 weekend with a game against Las Vegas Premier on Sunday. SC Del Sol will try to bounce back against Minnesota Thunder.

Saturday’s contest for Santa Rosa United was slightly closer than its opening day game. The Northern California club rolled past Arsenal FC 9-0 on Friday, which was one of the most lopsided results of the day.

Slammers offered a much stronger test, and looked to be in control of the game for a large part of the opening half.

The Southern California club got on the board with six minutes left in the first half. Carly Malatskey hit a cross into the box that Brittany Reyes flicked on to the far post. Tara Morris was there for the Slammers to put it into the back of the net.

Santa Rosa picked up its intensity in the second half and started to move the ball with more pace, which opened up the Slammers defense.

“The big thing is we tried to use our midfield better and find out weak side midfielder,” Santa Rosa United head coach Trisha Ziemer told TopDrawerSoccer.com. “We also tried to keep the ball more. We are a much better team with the ball. We wanted to settle the game, that was our plan.”

Winger Brooke Dunbar was the catalyst of the victory. Dunbar had a number of quality services into dangerous areas throughout the game.

Fellow winger Madison Gonzalez was the first to get on the end of one of the crosses. Gonzalez pushed a cross from Dunbar into the back of the net for the game-tying goal just after half time.

Dunbar continued to tear up the right side of the Slammers’ defense and was rewarded with another assist in the 66th minute when Taylor Ziemer headed home a service from Dunbar. It was Ziemer’s fifth goal of the weekend.

With six minutes left on the clock, Brianne Parsons connected on a corner kick from Sydney Rickert to put the game out of reach.

The scoreline is only part of the story when discussing San Diego Surf’s youngest team in the ECNL.

The Surf youngsters are simply a joy to watch. The team builds up from the back with every occasion, and actually has the personnel to break down opponents with possession.

Brazilian striker Catarina Macario slotted home her first goal of the game in the second minute when she received a pass at the top of the box and then slipped past her mark before passing the ball into the net.

Two minutes before half, Doyle scored her second of the game. This time Macario provided the assist that Doyle smashed home.

The second half was much of the same as the first, as Surf scored 22 seconds into the latter stanza. Yasmin Ahooja raced past the defense down the left side and whipped in a cross that Betsabe Ornelas finished.

Ana Gil and Macario finished off the scoring for Surf. The local side finishes its Showcase with a game against De Anza Force on Sunday afternoon.

For a full recap of Friday's action: click here.