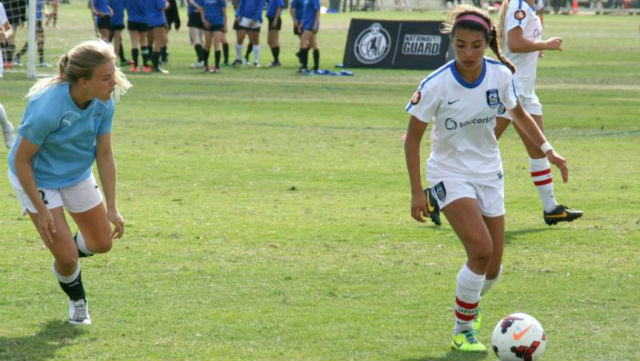 The last weekend of action prior to the first ECNL National Event served up another helping of quality games. Below is a roundup from around the country.

A pair of goals from Chloe Olsen provided the winning margin for De Anza Force, as it dropped San Juan SC 2-1 on Sunday.

Giavanna Vicari’s two goals ensured that Continental FC Delco would share a point with FSA FC, as the two sides drew 2-2. Continental lost its other game of the weekend, falling 4-1 at home against Connecticut FC.

Charlotte Soccer Academy received a pair of goals from Rachel Schleicher and Madyson Ellis on Saturday, on the way to defeating West Florida Flames 4-1. Charlotte lost 1-0 in its other game of the weekend against Orlando City SC.

The clash of St. Louis Scott Gallagher clubs saw the Missouri version win bragging rights against the Illinois side, as Emily Groark and Kayla Klipsch provided the offense in a 2-0 win.

The offensive exploits of Madeline Levins, who scored twice and added an assist, helping Eclipse Select to a 4-0 win against FC Wisconsin Eclipse. Amanda DiNardo and Amanda Rapaduski also found the back of the net.

Colorado Storm topped the Rush 3-1 on Sunday thanks to goals from Eliot Edwards, Morgan Szarka and Tianna Wright. Erin Hohnstein scored the Rush’s lone goal of the game.

Orlando City swept its trip to the Carolinas with a pair of shutout victories. First, they topped Carolina Elite Soccer Academy 1-0 on Saturday, and then the Florida side beat Charlotte Soccer Academy 2-0 on Sunday.

After losing its weekend opener to Orlando City, Carolina Elite bounced back with a 4-1 win against West Florida Flames. Midfielder Kathleen Colwick scored twice and had two assists, while Isabelle Russell and Samantha Britt also scored.

Charlotte Soccer Academy also beat West Florida, as Molly McGarry bagged a brace and Sophie Sipprell scored in a 3-1 victory for the North Carolina club side.

A trio of San Diego Surf players scored in the side’s 3-1 defeat of Eagles Soccer Club. Dana Dalton, Valerie Koerber and McKenna Moriarty were the goal scorers, while Jaclyn Flacco nabbed the consolation for Eagles.

It was a close matchup between Orlando City and Carolina Elite, with the Florida side emerging with the 2-1 win thanks to goals from Alison Backel and Evelyn Neidert. Kelsey Yeager came away with the only goal of the game for Carolina. Charlotte blanked Orlando 4-0 in its other game of the weekend.

Bethany Hohnstein scored twice, and Morgan Maroney and Janessa Fowler each scored as the Colorado Rush topped the Colorado Storm 4-0.