ECNL Texas goes out with a bang 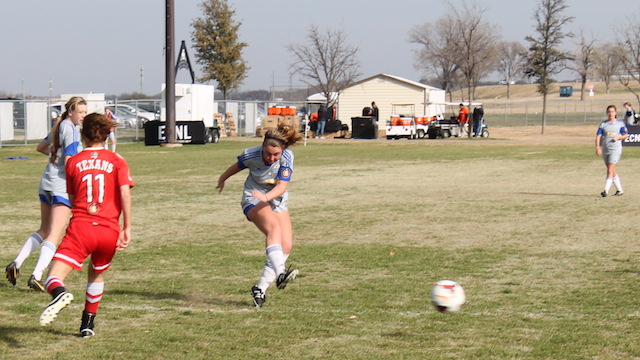 This one certainly didn’t.

On the last day of the ECNL Texas event here, the Lonestar SC U18s cemented the best defensive record of any team at the event with a scintillating scoreless draw against a talented St. Louis-Scott Gallagher side. Despite lambasting the SLSG goal with chance after chance, the winner wouldn’t fall.

Still, it was a positive result for Austin, Texas-based Lonestar, which joined several teams at the event here by not allowing a single goal in its three games. Not bad for a team that hadn’t played a game together since Dec. 28 and hadn’t gotten in a single practice before its first game at this weekend’s event.

“The girls are tired. Three days, three tough games,” Lonestar U18 coach J.D. Cochran said. “But we didn’t allow a goal all weekend, and we basically threw everything at (SLSG). Their goalie did a great job keeping everything out of the goal. Really happy with the girls today.”

The goals may not have come, but it wasn’t for lack of trying. Lonestar poured it on thick in the attacking third, especially in the second half. With Notre Dame commit Katherine Uhler pulling the strings from midfield and crushing in dangerous free kicks, Lonestar continually made SLSG keeper Kindra Lierz work for her shutout.

But there was no way through for Lonestar. Even with striker Kassi Hormuth buzzing around the penalty area and LSU commit Christyna Pitre anchoring the midfield and allowing the wingers to fly forward, SLSG kept its nerve and the teams held on to cruise home with a point apiece.

One of the more exciting games of the day came down to a Victoria Gates header inside the final seven minutes to decide an encounter that looked headed for a certain draw.

After a bright opening 10 minutes the Rush largely operated against the run of play, but they made those opening moments count by grabbing the game’s first goal. About nine minutes in, a seemingly innocuous shot was lifted toward keeper Emma McCrady, but she let the ball run off her forearms and bounce into the goal for a surprise opening salvo.

Over the remainder of the game, the Texans did their best to exert as much pressure as possible and enjoyed the majority of possession. About 15 minutes after McCrady’s mistake, Morgan Murphy erased it by knocking in a header off a corner from Chelsi Soto to tie the game back up headed into the half.

Meaningful chances were scarce in the second half, and the teams seemed destined to tread off into the sunset with a point apiece when the Texans got another fortuitous header. This one came from Gates, who redirected in a cross with just seven minutes left to finish this one off.

This one had a bit of everything, but over all it brought entertainment value. The high level of play was obvious to the larger-than-usual crowd gathered to watch popular hometown side Solar face off against Crossfire, one of the best teams in the ECNL.

They were not disappointed. Crossfire owned the opening exchanges and took an early lead when a Kelsey Turnbow cross found Jamie Rita, who redirected it back in for a 1-0 advantage against the wind. From there, Crossfire seemed destined to continue rolling, but Solar quickly turned the tables.

Behind the beguiling influence of central midfielder Taryn Torres, Solar gradually began turning possession back in its favor, and it got a stunning equalizer by finally utilizing the gusting wind at its back. About 10 minutes after Crossfire took its lead, Solar equalized via Keely Morrow, who let fly from 40 yards and let the wind do the rest. Her shot caught up in the breeze and flew over the keeper’s head, shocking everyone and leveling terms.

That changed the game’s complexion as Crossfire gradually began losing influence. They got a deserved winner after a penalty yielded a successful conversion from Torres to seal the deal and help Solar to two straight wins after dropping their opener here on Friday.

This was some weekend for the Sporting Blue Valley U15s. After opening with a 3-0 win over a solid West Florida Flames side, it dropped Santa Rosa United 4-1 on Saturday before thrashing the Utah Avalanche on Sunday in a game that could’ve well been even more lopsided. Three games and a goal differential of 10-1. Not too shabby.

Sunday was more of the same. Sporting went ahead early when Tatum Heller tapped in a close-range effort inside the six for a 1-0 lead, and the attack kept rolling forward. Stoked by attacking midfielders Keelie Fothergill and Alexis Mitchell, Sporting found and exploited Utah’s various foundational cracks in defense. That paid off late in the first half when Shelby Lierz cranked a 35-yard free kick that danced in the wind at her back and flew in past the keeper.

Finally, right after the second half started, Sporting got a deserved third when Haley Freeman punched one in to allow Sporting to coast through the second half unscathed and finish its season on a high note.

Midfielder Emma Langer assisted on both goals, one in each half, as the Eclipse prevailed. Working down the left side, the right-footed Langer successfully crossed to Mary DeWalt  for a header and a 1-0 lead. The buildup for the second goal began with another Langer run down the left side. Her cross in the area was briefly deflected by the Fire keeper before finding its way to Molly Riebau for a point-blank conversion.

The well-organized back three of Jessica Cooley, Dana O’Boye and Payton Wesley kept Fire scoring chances to a minimum. The best Fire second-half opportunity came from captain Kaitlyn Winegarner who missed a couple of feet right of the target from 20 yards.

Amanda Porter assisted on a goal in the first half and scored in the second to send Real Colorado to a solid victory. It was Porter’s corner kick that led to the first goal. The ball came free in the box and Jaelin Howell found herself in a crowd of players and was able to jam it in after a teammate fanned on a shot.

“On the corner, I’ve been working on curving the ball with the wind and it helps that I’m left-footed,’’ Porter said. “I just tried to put the ball in the area where we had several players.’’

Porter clinched victory late in the match with a determined run down the right touchline. She beat a defender and broke to the middle, finally shooting from 15 yards. The ball struck the right post and ricocheted off the sprawling GSA keeper and then into the net. “Usually when you hit the post, it is not a good thing,’’ she said.

AHFC struck for pair of goals in the opening 10 minutes and maintained a two-goal margin for the victory. Leslie Bonner led the way with a pair of goals, including a 35-yard stunner that hopped into the right corner of goal. All of the scoring came in the first half. Selena Peters powered in a header for the other AHFC goal. Crossfire chipped away at a 2-0 deficit with Beth Stella’s powerful shot from close range. Jordan Branch and Sierra Bilginer contributed to the buildup.