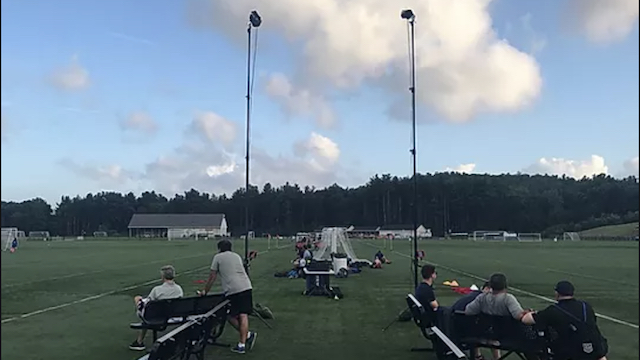 Youth sports have forever been changed in response to COVID-19. The days of crowding the sideline or gym for college recruiting are over. The pictures with a sea of lawn chairs on the touchline are a distant memory. An empty sideline or gym is a far more likely scenario in the immediate future for youth sports.

The reality is difficult for many to recognize at this point, but some individuals and companies have already begin planning for the new dynamic.

Girls Academy League gave a clear indication that they want to be around for long time when that national league announced a partnership with Instat as the official video analysis. Instat serves a practical purposed for teams with easy to use software braking down moments and touches for specific players, but the bigger appeal is the recruiting tool. Offering college coaches an honest representation of a player without being there to see him or her in action.

The old complaints about the video not being a fair representation of a player’s quality or contributions are gone thanks to the innovation of companies like Instat, Hudl, Upper 90 Sports Media, and others who are advancing the way games are recorded to a level many never dreamed of just a few years ago.

Sean Miller started Upper 90 Sports Media out of necessity almost a decade ago. He wanted to record games for his daughter’s club team in Texas. At the time, there were only a couple of companies in the area doing film at that time, so he went in with another parent on the team to buy a rig from End Zone Video Systems and a camera. Miller told TopDrawerSoccer on Monday that he still has the original rig even as his business has grown considerably since then.

The first days of lugging the towering equipment, designed to give a high vantage point with an extending pole, drew the stare of many on neighboring fields. The inquisitive looks led to business opportunities though.

Miller began to expand within Texas as more clubs wanted to have access to game film and more parents saw the value in submitting quality footage to college coaches.

That initial shock of seeing a 30 foot pole next to a soccer field has quickly transition into a regular occurrence. Development Academy, the now defunct U.S. Soccer run league, required all games to be filmed. Other leagues do not have the same mandates but clubs have seen the value of the footage and set up contracts on their own to make sure games are filmed for the next season.

During this unusual time, the appeal of that is amplified now that attending a game is no longer a foregone conclusion. From a scouting perspective, college coaches want the best video of players possible and the high vantage setups have been at the forefront of providing that regardless of the environment where the game is played.

Now, parents are being restricted from the sidelines so the appeal of streaming the games is growing to accommodate new safety measures. Miller has experienced the new environment on the sidelines as Texas has entered Phase Three (local competition) of the U.S. Soccer Play On guidelines.

“Until recently, we were at a standstill,” Miller said. “In Texas, we had stay-at-home until recently. I do a lot of stuff with coaching education for C license courses with state associations. I’ve got about 14 states that I do the video for the coaching education. That just standstill stopped in March,” Miller said. “Now that we are easing back into being on the field, I’ve done some streaming for Texans and Solar - a lot of the U19 teams have been playing WPSL teams. I’ve been doing filming and streaming so the parents can watch when they weren’t allowed at the facility.”

The lack of action on the field has not slowed down some of the business of the sport as players are still looking forward.

“This is a really weird time because you have 03s (the class of 2021) who are in the midst of finalizing their recruiting and the 04s (the class of 2022) just opened up on June 15th,” Miller said. “We’ve been seeing a lot of 04s committed recently, but a lot of kids - and through the stay-at-home period - have been asking for a highlight video because the camps are canceled and there are no tournaments for the coaches to go and watch.”

Miller said that he has always believed streaming was next for the growth of the content.

“I’ve always felt that streaming was going to be the next evolution of video,” Miller said. “I also think game analysis is the next thing that people will be taking advantage of. You see pros using game analytics. It’s the evolution of youth sport in general. If you focus that on soccer, we’re still in our infancy. The adoption rate of video is increasing every year. With the DA requiring all games to be filmed, that helped with the adoption for some top clubs who may not have seen the benefits of video prior to that. I do feel like that has helped significantly. I have independent clubs - other than the big four or five in our area - that I do a lot of film for. It’s really starting to gain traction and the adoption rate is higher. The next evolution of that is definitely streaming and game analytics is after that.”

The future for Upper 90 Sports Media, Instat, and others is obvious as youth games are being streamed all over the world with today’s technology convenience that made yesterday’s impossible into today’s simple.

Despite being one of the first in the field and working with some of the top clubs, Miller is pushing Upper 90 forward. He recently began working with an AI outfit that automatically zooms and follows the action on the field. He’s also expanded Upper 90 to include team brochures as well as a social media component.

Covid-19 has changed youth sports, but adaptation and advancements from companies like Instat and Upper 90 will hopefully allow the games to resume safely in the not so distant future - even without the normal chairs on the sideline.