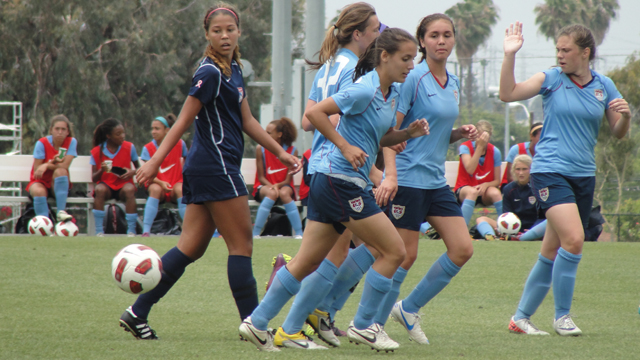 The pressure is already on the members of the U.S. U15 Girls National Team.

Even though the current U17 Women’s National Team has not finished its run, the next group is already being groomed to follow in the footsteps as the dominant force in the Americas. 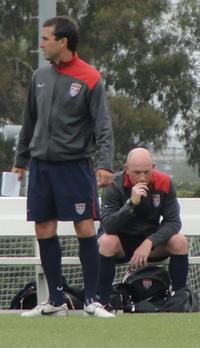 The U15 GNT wrapped up its second camp of 2012 on Sunday at the Home Depot Center following a 1-1 draw against Cal South ODP on Wednesday and a 4-0 win over Fram U16 on Saturday.

“Our main objective this week was to slowly progress and get better,” U15 GNT head coach Daman Nahas told TopDrawerSoccer.com. “From the middle of the week to the end of the week, we definitely improved and everyone took advantage of their opportunities.”

Nahas also spoke at length about how important it is for these players to make the most of every callup especially in an age group that is so meaningful in the World Cup cycles.

“We stressed the last few days, as this team is the next U17 cycle, about the urgency and commitment that is required,” Nahas said. “As they step on the field, they have to listen and be willing to implement.”

In terms of playing style, the week was a success for Nahas. The group showed considerable development in holding possession from Wednesday to Saturday – something the coach said was lacking after the 1-1 draw against Cal South ODP.

Nahas also tested his roster with different combinations between the two scrimmages, which ended up with the coach selecting the two youngest players Mallory Pugh (Real Colorado) and Mia Gyau (Bethesda Lions) to start on the wings on Saturday.

Both showed well with Pugh grabbing the opening goal after racing through a few defenders and calmly slotting the ball around the keeper.

There were others who stood out during the week including Jennifer Westendorf (GSA Phoenix) supplying a fittingly splendid goal in the come-from-behind draw earlier in the week and then her club-mate Ella Stevens netting two goals on Saturday from a center midfield position.

Mayra Pelayo-Bernal (W. Palm Beach Magic Jacks) added toughness to the midfield with her introduction in the second scrimmage. The Floridian was fearless and got stuck in on as many challenges as she could.

Outside backs Ellie Jean (Oakwood SC) and Tegan McGrady (MVLA SC) did well defensively and showed good intuition in joining into the attack frequently during both scrimmages.

“Even before we came in, we were excited about this group,” Nahas said. “We have brought some new players in and they have all done really well for their first week. The foundation for this group is pretty exciting for the next U17 team.”

While much of the talk following the game on Saturday was positive, Nahas did seem disappointed with the camp schedule for the age group.

The U15 GNT will not return to camp until October according to the coach, which is the normal four-month break between camps for this age.

After a week that was encouraging on so many levels, the recess between camps may feel more like a year though.