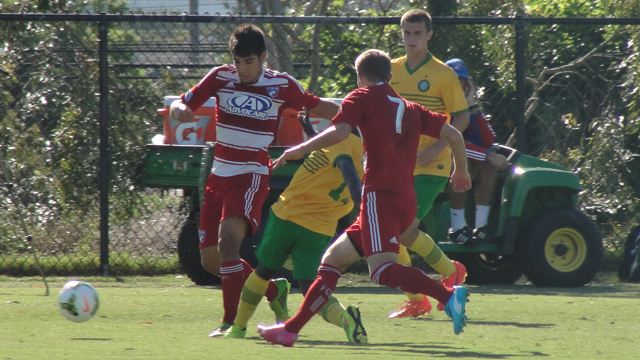 After an eventful Thursday evening at the National Training Center, it was the favorites who came out on top and advanced to Saturday’s finale. Real Salt Lake AZ, the number one team overall in the regular season standings, and LA Galaxy, the fifth seed, advanced to the U16 title game. Bethesda-Olney, the top seed in the older age group, and PDA, the second seed, clinched the spots in the U18 marquee matchup.

LA Galaxy Academy advanced to its second Development Academy championship on Thursday thanks to a hat trick from Rey Ortiz.

The California recruit scored the opener in the 11th minute when he burst past his mark and ripped a shot to the inside of the far post.

Magic rebounded well from the early deficit and equalized in the 27th minute when Luka Prpa fired a shot through a cluster of bodies in front of the net and into the goal.

The Mid-American Division champions continued to apply the pressure following the equalizer. Kendall Stork had a golden chance to break the deadlock before half. The speedy forward beat the LA defenders to the bouncing ball and tried to push it past the Galaxy goalkeeper, who had come out over 30 yards from goal to clear the danger. The keeper managed to push it away, but Stork and the Magic bench yelled for a handball. The referee awarded nothing.

Magic did take the lead shortly after the second half started. Stork lost his defender and finished off an easy chance to give Chicago a 2-1 lead.

“This is was another game where we had to suffer and really dig deep,” LA Galaxy U16/14 head coach Mike Munoz said after the game. “We’ve shown as a family that we’ve been able to overcome anything. This was no different.”

Ortiz went back to work and scored goals in the 61st and 78th minutes to complete the hat trick and claim the victory.

“Rey [Ortiz] is a fantastic player,” Munoz said. “He has very unique capabilities. I asked him in the second half when we went down if he could pull of something special. He always finds a way to do that.”

Strikers tried to weather the storm early and keep the potent RSL attack at bay, but the plywood over the windows could only last so long.

Real Salt Lake opened the scoring in the 17th minute when Joshua Doughty controlled a hopeful long-range effort just outside the six-yard box. Doughty turned and fired into the net.

RSL doubled the lead 10 minutes later when Adolfo Ovalle had the audacity to try a shot with the outside of his foot from 25 yards out. It took courage and technique to earn attempt that shot, which left Strikers goalkeeper Dakota Havlick stunned as he watched it hit off the post and crash into the goal.

Strikers had a couple of chances to cut the lead in half in the first half, but RSL goalkeeper Christian Hererra was big when he was called upon.

Strikers did give the crowd something to cheer about early in the second half when Halil Beqaj ended the shutout and restored belief in the squad with a goal.

However, Strikers never got any closer and two late goals from Sebastian Saucedo propelled the MLS academy to a final showdown with LA Galaxy on Saturday.

PDA jumped on FC Dallas early and should have had the opening goal within three minutes. Duke-bound forward Brian White put his head on the end of a cross, but he somehow missed the frame from six yards out. White does not miss many, especially from that distance.

FC Dallas shook off the butterflies and started to sting like hornets. The MLS Academy showed off some crisp passing and clever movements while enjoying the run of play through the opening 20 minutes. However, PDA stayed strong and FC Dallas could not get close enough to the net to really threaten the goal.

The lone goal came midway through the opening half when a failed clearance from a set piece land on Anderson Asiedu’s right foot. The St. Benedict’s Prep senior-to-be one-timed his volley into the back of the net.

“[Asiedu] has been doing it all season for us,” PDA coach Sam Nellins said after the game. “He means a lot to the team – his personality, his drive. He wants to be a goal-scorer but I keep holding him back. Maybe next year, we’ll let him loose.”

FC Dallas pushed for a goal, but the MLS academy could never find the right key to unlock the stubborn PDA defense.

Bethesda-Olney’s stellar debut season in the Development Academy still has another chapter to write.

The boys from Maryland faced a difficult challenge on Thursday against a lively Impact side. Bethesda-Olney (BOSA) had the first real chance of the game when Matthew Ledder picked off an errant square pass along the backline. Ledder’s shot went wide of the frame though.

The teams continued to exchange chances with both sides showing quality passing sequences.

BOSA goalkeeper Joseph Bogan III came up with the save of the game in the 69th minute when he palmed away a shot bound for the corner of the net.

Ledder provided the game-winner in the 85th minute when he scored his 20th goal of the season after getting on the end of a corner kick and smashing home his shot.

“It was crazy. I’ve never felt anything like that,” Ledder said. “After seeing it go in the net, it was cloud nine. You just run around and you don’t know what to do. They were a very hard team to break down. To finally get that goal, it was the greatest feeling in the world.”

Impact pushed hard for the equalizer in the dying minutes, but the Bethesda-Olney defense stood strong and kept the shutout.