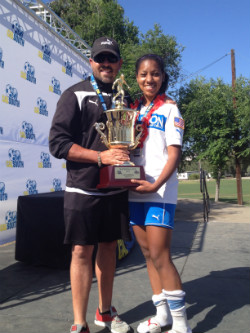 An attacking outside back with good speed, Machaela George found plenty of reasons to commit to Santa Clara, starting at the top.

“My first reason is the coaching staff,” George told TopDrawerSoccer.com. “Jerry Smith was always very supportive of me, as well as, Curtis McAlister. And then on my unofficial visit, I fell in love with the campus, the location and the school’s rich tradition.”

Along with her appreciation of the coaching staff, George liked the way the team plays when she saw them.

“I was very impressed with the team and the style of which they play and felt it is a perfect fit for me,” she said. “It is important to me that I go to a school that has a strong winning tradition and competes for national championships every year and Santa Clara is definitely that.  I also love how involved the staff is with the team. They have already made me feel like I am part of their family.”

It’s been a long and thorough college search for Khasya Cunningham. Starting her freshman year of high school, she drew up a list of 30 schools she was interested in at every level.

Each year, she narrowed the list down, until she ultimately committed to UC Irvine – a program near the top of her list from the start.

“My top three things were location, academics, and then soccer program,” Cunningham told TopDrawerSoccer.com. “I wanted to go to a school that would exceed all three of those expectations. It was hard to decide and navigate through all the different programs that all the colleges had to offer. I did not want to waver from my list of wants.”

UC Irvine ticked all of those boxes for the striker: a beach location in her native California, the right kind of academic opportunities – Cunningham is planning on majoring in sociology – and a soccer program that appealed to her.

“I had the opportunity to meet the coaching staff of UC Irvine,” she said. “Assistant Coach Colette was very friendly and genuine. My family had the chance to spend a day on campus and witness school in session. My time with Head Coach Scott Juniper was priceless. We spent time talking about family, nutrition, fitness, and my favorite, food. We had a lot of things in common. I felt comfortable around him. His dedication to the team was right on target on what I was looking for in a soccer program.”

Defender Ashlyne McComb (Real Colorado) committed to Samford for the class of 2015.

Defender Emily Czechowski (Buffalo Soccer Academy) committed to Canisius for the class of 2015.