For recruits searching for the best fit in a college program, heading to the opposite side of the country isn’t exactly an uncommon practice. 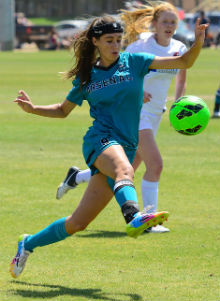 A self-described technical player, Anissa Dadkhah will do just that in the fall of 2015, going from Southern California to Blacksburg, Virginia, to join rising ACC power Virginia Tech(w).

“I decided to commit to Virginia Tech because it has the perfect combination of academics and athletics, which is exactly what I was looking for in a school,” Dadkhah told TopDrawerSoccer.com.

She unsurprisingly raved about the soccer program, which was the major pull across the continent.

“There are so many things I love about the soccer program,” she said. “Most importantly, I love the team mentality. On my unofficial visit in August of last year, the team had just done a team-building exercise and it was great to see the strong impact it had on each of the players. All of the girls I spoke with emphasized the sense of family embedded within the soccer program and within the school as a whole. Every Hokie has a strong connection to Virginia Tech and this pride for the school brings Hokies together into one large family unit.”

The Surf midfielder had no hesitations about heading all the way across the country, as she spent some time growing up in Boston. She’s eager to see the four seasons up close, and also found the right academic opportunity for herself.

“My favorite part about the school itself is its Engineering program,” Dadkah said. “Also, the Virginia Tech campus is beautiful, and I love both the architecture and arrangement of all the athletic and academic buildings.”

Seven players are committed to join the Hokies in 2015.

When Tatum Heeres verbally committed to play soccer at Arizona State, she took one step closer to achieving a longtime goal.

“It has always been a goal of mine to play in the Pac-12 and ASU has always been one of my top choices,” she told TopDrawerSoccer.com. “I really liked the idea of staying in-state. My family and I are really close and I'm happy they will be able to come to many of the games. I also like that they have the Barrett Honors College as an option.”

While staying close to home was a strong influence, Heeres’s parents both went to ASU, which allows her to maintain the family tradition.

Picking an out of state school was an option as Colorado and USC had tabled offers to her, but the competitive attacker had a strong familiarity with the soccer program at ASU and is eager to be a part of it down the road.

“I've been watching the ASU soccer program progress over the past few years and I like the way the program is heading,” she said. “I feel that Coach Kevin Boyd has recruited many high impact players. The facilities and field are top notch. I love the coaching staff and their coaching philosophies. I feel that my style of play is similar to the way ASU plays. I can’t wait to get there and become an impact player."

Heeres is one of four players committed to Arizona State for 2016.

Defender Taylor Spaulding (Cleveland FC) committed to Northern Kentucky for the class of 2015.

Forward Kayla Fong (De Anza Force) committed to California for the class of 2016.

Forward Jordan Mercado (Heat FC) committed to Northern Arizona for the class of 2015.