The Fighting Irish will be welcoming a set of talented twins for its 2014 recruiting class. Kaitlin and Taylor Klawunder recently gave their verbal commitment to Notre Dame. 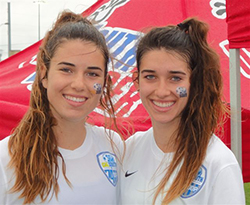 The Klawunder twins were featured earlier this year in a Recruiting Insider. Last week, they talked about why they ultimately decided on joining the Irish.

“We both wanted the same thing when it came to choosing a college,” they wrote TopDrawerSoccer.com. “A university with strong academics and a strong soccer program. Also, we wanted to experience the excitement of being a part of something special – a school with tradition and history.”

They went on to explain that leaving Southern California was not originally in their plans, but talking to head coach Randy Waldrum and then visiting the picturesque Indiana campus made them reconsider.

“One visit to the campus was all we needed. The campus is amazing and it was great to finally meet coaches [Randy] Waldrum, [Ken] Nuber, and [Dawn] Greathouse. We loved everything about the school and the soccer program.”

The ODP standouts are excited about the prospect of joining such a storied program and hope to make some of their own history there.

“Notre Dame has everything we ever dreamed of for our college experience including the opportunity to win a national championship!”

Goalkeeper Katie Turner made up her mind earlier this week on where she wanted to play at the next level.

The Texas-native decided to stay close to home and gave her verbal commitment to Houston Baptist.

“This is the perfect school for me,” Turner told TopDrawerSoccer.com. “I really like the coaching staff, the campus and the soccer program.”

Turner was profiled earlier this year in a Recruiting Insider.

These days, it’s no surprise to see top players flock to Notre Dame, and the recruiting class of 2013 picked up another strong piece with Rilka Noel’s commitment.

The Michigan Hawk found everything she liked at the school.

“ND optimizes both the academic and soccer experience in a setting that is relatively close to home,” she wrote TopDrawerSoccer.com in an email.

Noel specifically cited how influential the coaching staff was in convincing her that Notre Dame was the right place for her to play college soccer.

Coach Randy [Waldrum] and Coach Ken [Nuber], have been stellar in guiding and encouraging me through the process: they were always available to me or my parents,” she said.

“Both of them played a critical role in my decision to attend ND.  And I have no doubt that my soccer development will increase at a very fast pace under their tutelage. My goal is to win a couple of national championships while I continue to excel academically.”

Attacker Katie Richmond is staying in state for school.

The resilient players for Gulf Coast Texans found the perfect fit and made the well-researched decision to verbally commit to the Florida Gators.

“I decided to commit to Florida because not only is the soccer program one of the most revered and highly acknowledged teams in the country, but the school itself is one of the most prestigious and sought for academically,” she wrote TopDrawerSoccer.com in an email. “With a top notch soccer team and great academics, Florida would set me not only on the road to becoming the best soccer player I could be, but also lead me down the best path to pursue my future dreams.”

Several aspects of the team itself caught her eye as she weighed her options to play soccer at the collegiate level.

“Many things stood out to me about the soccer program,” she said. “Not only the overwhelming SEC conference championships they have won, but the style of play that they use. The way they pass the ball and wear the other team down and work as one unit is so admirable and that is the style of play that I see myself working the best in.

“Also, the fact that fitness is very important, I have watched Florida play numerous times against various teams and not once did the speed of play slow down or did I see anyone gasping for air.”

Don’t forget to send us your college commitments at commit@topdrawersoccer.com