An attacking force from Eastside FC, Celia Story found the right opportunity for her all the way across the country in Providence, Rhode Island.

“I knew that I wanted a school with high academics, and Brown certainly exceeds that standard,” Story told TopDrawerSoccer.com. “With the subjects I'm interested in, Brown provides programs and opportunities that you can't really find anywhere else. Additionally, when I visited, I instantly fell in love with the campus. Also, Providence is an awesome city to be next to as a college student.” 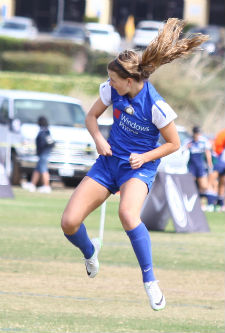 Story also jumped at the chance to be closer to family, as her older sister plays soccer at Bentley University in Boston, just 45 minutes where she’ll be.

The coaching staff at Brown also played a large role in convincing Story.

“From the beginning of the recruiting process, I got along very well with head coach Phil Pincince,” she said. “He has been there for 37 years and has built an incredibly strong program. I liked how honest he was throughout the process. I knew that I wanted to play in a program that is competitive, and Brown's certainly is.”

Of course, she had to think long and hard about the decision, considering how far it’ll be from Washington.

“As I'm from Seattle, Brown is very far away, so I had to make sure it was really what I wanted to do,” Story said. “However, when you are presented with the opportunity to attend an Ivy League school, how can you say no?”

Four players are committed to Brown for the class of 2015.

When it came to making her college choice, Brooke Chandler didn’t even have to look out of the region.

“After visiting the University of Oregon and meeting the coaching staff, I knew it would be a perfect fit for me,” she told TopDrawerSoccer.com. “University of Oregon has a reputation for their commitment to their student athletes success on the field and in the classroom.”

The impression of the facilities and program aside, the ambitions of the soccer program under head coach Kat Mertz also inspired her choice.

“Coach Mertz has a vision for the program at U of O and every time we talked I got more and more excited about being part of that vision,” Chandler said. “I liked the experience that coach Kat Mertz, coach Christie Welsh, and coach Manny Martins bring to the field and the connection they share with their team. Seeing U of O play games and practice, I could tell that the expectation is a high level performance.”

Playing in the Pac-12 was another important aspect of Chandler’s decision.

“The coaches challenge players to push hard but the energy is positive and focused on becoming a Pac 12 powerhouse,” she said. “I wanted to play in the Pac12 and be close enough to home that my family could come watch my team play.”

Chandler is the first reported verbal commitment to Oregon for the class of 2017.