A year and a half ago, Brooke Ligtenberg suffered a torn labrum. Any kind of serious injury is a youth player’s nightmare, and Ligtenberg’s concern related to ensuring that college coaches still had the chance to see her play. 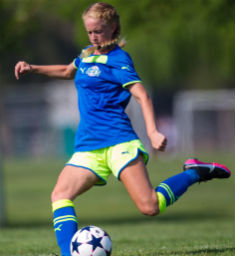 After a long road of surgery and recovery, she ended up missing almost seven months of action, returning to ECNL play at the 2013 Memorial Day ECNL event in New Jersey.

Eventually, she worked her way back to full fitness, narrowing her list of schools down to Cal State Fullerton, Loyola Marymount and Pacific.

Playing Division I soccer was the goal, and a visit to Fullerton proved decisive.

“The minute we walked on the campus to watch a training session I felt welcomed,” she told TopDrawerSoccer.com. “The coaches (Coach Demian, Diego, Stacey and Kellan) and even some players took turns coming over and introducing themselves to me. Then after the training session the coaches took me on a campus tour and I loved the campus. I loved the size, location and even though there are a lot of students it still had a small feeling because of the layout. I liked the fact that everywhere we went the students were wearing CSUF clothes and you could tell everyone loved the school.”

Ligtenberg got to know the team better and better before making a commitment, and it was the non-soccer aspects of the program that ultimately helped her make up her mind.

“The team spends a lot of time being involved in the community and I really liked that,” she explained. “The team’s soccer style was the kind of soccer I like to play and I watched the outside midfielders making creative runs that I could see myself contributing to.”

Ligtenberg is the second verbal commitment to Cal State Fullerton for the class of 2015.

During her college search, Ashlynn Powell saw numerous schools while touring around with her parents.

But no school could match the positive vibe that she felt while at Presbyterian College(w), a Big South program in South Carolina. And the commitment she saw from the coaching staff helped convince her that this was the place for her to be.

“Head Coach Brian Purcell is a PC grad and he started the women’s soccer program,” Powell told TopDRawerSoccer.com. “He has been there a long time and is very committed to the school and the program. Assistant coach Sara Beth Anderson is also a PC grad. She is young and full of energy. Having both coaches as grads just show how much they love their school.”

She liked the small school and beautiful campus, as well as the tight-knit soccer program.

“I have spent time with the team and they are a big family,” she said. “[They are] very close and I really like that. I attended alumni game last weekend and it was great to see so many former players come back.”

Midfielder Erin Winters (Michigan Rush) committed to McNeese State for the class of 2015.

Defender Alicia Roy (Syosset SC) committed to Sacred Heart for the class of 2015.

Midfielder Rylee Seekins (FC Portland Academy) committed to Portland for the class of 2016.

Midfileder Emily Rimdzius (PDA) committed to Seton Hall for the class of 2015.

Midfielder Grace Cory (Dallas Texans) committed to Alabama for the class of 2016.

Defender Madeline Brown (Real Colorado) committed to Arizona for the class of 2015.

Midfielder Malia Berkely (Fairfield Optimist) committed to Florida State for the class of 2016.

Defender Katie Ravenna (Fairfield Optimist) committed to Wake Forest for the class of 2015.

Forward Jillienne Aguilera (Juventus SC) committed to Arizona for the class of 2016.