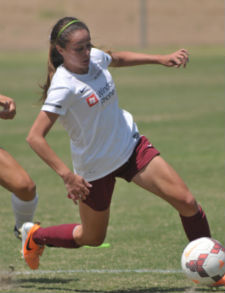 After taking the job in December, the architect behind Washington State’s fantastic 2013 grabbed a pair of 2016 recruits ranked in the top 150.

One of them is goalkeeper Kaylie Collins, who had plenty of good things to say about the program and school.

“USC’s reputation as a top academic institution has always been of interest to me, so when I got on campus everything else just fell into place,” Collins told TopDrawerSoccer.com. “The culture and tradition of the athletic program makes it an even more exciting and vibrant place to live. The final piece of the puzzle was Keidane McAlpine and his complete dedicated to bringing USC back to the top of women’s college soccer. After meeting him and the rest of the staff, I knew USC was the place for me.”

National champions in 2007, USC does have tradition that other programs lack, even in the loaded Pac-12. Collins saw that, but was also very interested about what the new coaching staff is implementing at the Pac-12 team.

“I love Keidane’s coaching philosophies, especially how he embraces faith as a key factor to success regardless of religious affiliation,” she said. “He expressed to me many times his belief in building a team off character, which I fully support. It excites me to know that when I leave USC, I will not only leave a better player, but a better person, leader, and teammate.”

Staying close to home was another factor, as Collins likes the proximity to her native NorCal.

“I fell in love with the spirited vibe and beauty of the campus,” she said. “The sports facilities are like no other and classrooms are filled with eager to learn students and eager to teach teachers. Not only is it an incredible place to live and train, but it also puts me so close to family. It’s just a short flight home to my 5-year-old sister, brother, and parents.”

Along with the commitment of Kaylie Collins, USC also recently received a commitment from Julia Bingham, one of the top scorers in the ECNL this past season.

A left-footed forward, she said that USC felt like home for her, making it an easier decision. She’s looking forward to the challenge of one of the nation’s most demanding conferences.

“I wanted to compete in a top conference in the country and what better place to be than the PAC-12,” Bingham told TopDrawerSoccer.com. “I am thrilled to be able to play close to home where I can continue to be surrounded by the support of my family and friends.”

Similar to Collins, Bingham was impressed by coach McAlpine and what he and his assistants are trying to implement at USC.

“They are wonderful people who are doing the right things for the right reasons,” she said. “They are creating a soccer culture at USC that I want to be a part of! I am confident this environment will nurture my academic goals as well as my passion for the game.”

Five players are currently committed to USC for its 2016 recruiting class.

Forward Alissa Gorzak (Eclipse Select) committed to Virginia for the class of 2016.

Defender Conner Huggins (Vardar) committed to Villanova for the class of 2016.

Defender Peyton Beck (Lou Fusc SC) committed to Wagner for the class of 2015.