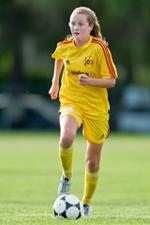 Reason: Salsberg announced her decision last week but gave us greater detail in a follow up interview.  “I know that by going to Alabama State I will be able to really make a difference and contribute to the team, Salsberg said. “The campus visit really went well, and some of mine did not. I remember those trips and I used that to keep me going. A lot of people doubted me, and I wanted to prove them wrong. They said I couldn't do it and I did. Their doubts got me a free college education.”

Salsberg is heading to Alabama State alongside classmate Anastasia McCleary. She brings speed and a real intensity to the game. A team captain, McCleary also likes to brag about her vertical leap – which makes up for her lack of size.

Reason: “UNC was always at the top of my list,” Kingman told her club PSV website. “I visited a few schools before UNC, but the second I stepped on the campus I knew that it was the place for me. Every player and coach has a huge passion for the game and it's contagious.”

Kingman joins fellow 2014 standout Megan Buckingham on the North Carolina commit list. Ranked No. 18 in our Top 150, Kingman is a play-making midfielder who has the ability to control the pace of the game.

Abigail Sieperda, KCFC
Commitment: Verbal to Arkansas for the 2014 season.

Defenses beware: dynamic scorer on the loose. Sieperda has been lighting it up this season for one of the top ECNL teams in the country. She has 16 goals in 23 games, only part of the reason we have her ranked at No. 138 in our Top 150 ranking. Given her performance, Sieperda’s early commit should come as little surprise. She already possesses good size and feel and will only improve between now and her senior year.

Devon Cummings (FC Bucks) has verbally committed to Marist for the 2013 season.

Mikayla Brillon (Striker FC) has verbally committed to Eastern Kentucky for the 2013 season.

Danielle Giltner (Legends FC) has verbally committed to UC Riverside for the 2013 season.