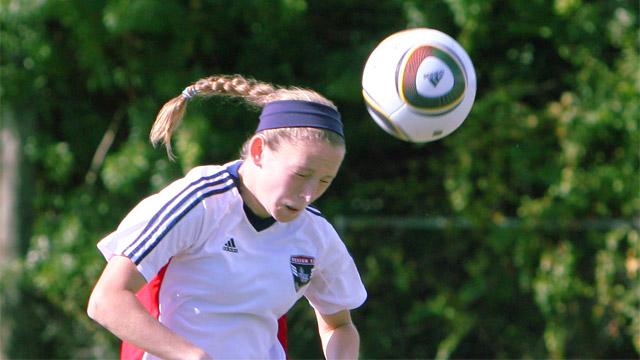 BOCA RATON, FLORIDA – The best college recruiting event in the country came to an end here Friday as the U.S. Youth Soccer Girls ODP Interregional conducted its final matches in the 1995 and 1996 birth year age groups.

Iona coach Eric Teepe’s Region I team played a nice game of soccer Friday. I especially liked midfielder Lindsey Lane, who reminds me a bit of club alum, U20 WNT and Penn State midfielder Christine Nairn. Lane passes extremely well, competes hard for every ball and can really drive a ball on a line.

{mosvideo:350}She showed this in the 1st half when her hard shot from a set piece was deflected off the bar by Region III goalkeeper Claire Wheatley. The rebound was claimed by Pittsburgh-area player Veronica Latsko who knocked it home for a 1-0 lead.

Region III responded with a nice passing play between forwards Marion Crowder, Elizabeth Keester and Antoinette Payne, whose shot went off the goalpost. Kiana Clarke of Florida is a fast defender who covered a lot of ground for the southeasterners. Region III goalkeeper Wheatley, of Solar SC, made a couple of good saves in the half and also earned distinction on the week by rolling the ball out a few times. Most of the week all I’ve seen from goalkeepers in terms of distribution is to punt first and ask questions later.

Ariel Kupritz of Brentwood SC had a good half, showcasing her trademark attacking runs on the ball.

Near the end of the contest, Region III got a dramatic equalizer, as CASL’s Morgan Reid first-timed a cross over from the left, and Dallas Texans’ forward Jasmine Hart connected with a terrific volley to put the ball in the back of the net for a 1-1 draw.

Coach Teepe said he has tried to get the team to play a combination style this week.

In the final game involving the youngest age group here, the Midwesterners, who had impressed so much in their previous contest, looked a bit fatigued coming out. MVLA Lightning’s Gabriella Kaplan tapped in the rebound of a shot by Mariah Lee of Washington Premier. 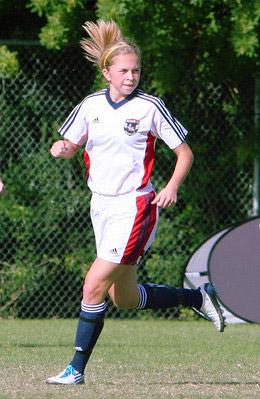 Region II girls compete.
Region II got an unlikely equalizer late in the 1st half. Courtney Petersen of Michigan Hawks played a ball in that deflected off a defender and then was run onto by Reilly Martin of Carmel United. The Region IV team seemed to stop playing as they appealed for offside and Martin just kept on going as the flag stayed down, finishing to make it 1-1 at the break.

Nicole Zuckerman of Michigan Hawks is a good 1v1 defender. Samantha Kokosak of Carmel United shows some good footskills and vision in midfield. Indigo Gibson of So Cal Blues serves a good ball on free kicks, while Sarah Robinson of MVLA Lightning is a dynamic attacking player, with great agility, technique, vision and a fighting spirit. She may have been the most consistently effective player at the event here this week of any age group.

Region IV went up in the 2nd half when Jordan DiBiasi of Colorado Rush made a good run and hit a shot that goalkeeper Olivia Sherman tipped off the crossbar. Mariah Lee was there to knock in the rebound and it was 2-1. Minnesota Thunder’s Sophie Babo provided the  equalizer however, with an audacious 50-yard strike that went in just under the bar.

Babo had a chance to score a winner but Region IV goalkeeper Kaylyn Smith made a good 1v1 save. Smith, of Colorado club Pride Predators, then made a sprawling save to deny Megan Buckingham and the match ended in a draw.

In the other games Friday, the Region II 95s defeated Region IV 2-1. Rose Lavelle and Grace Lachowecki scored for the Midwestern side, while Emily Bruder pulled one back late for Region IV. Danielle Hogarth scored a late winner for Region I in their 1-0 victory over Region III’s 96 team.