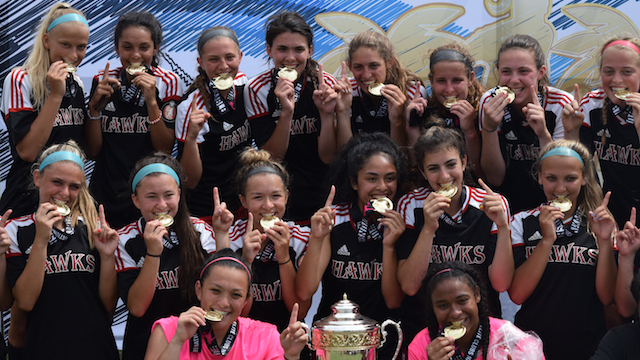 SAN DIEGO, California - So Cal Blues, FC Dallas, and Michigan Hawks won the National Championships in the U15, U16, and U17 age groups on Saturday at the finals of the ECNL Champions League postseason.

Michigan Hawks were also awarded the Club of the Year honor in recognition of the success of the club in all five age groups.

So Cal Blues concluded a perfect club soccer season on Saturday in front of a rowdy home crowd. The Blues won over 30 games without suffering a loss or draw along the way. In the ECNL U15 National Championship on Saturday against Solar Chelsea SC, Blues scored 40 seconds into the game and never took their collective foot off the gas. The final ended up with a 7-2 result in favor of So Cal as the swarming pressure and clinical finishing was too much for the Texas side.

The conclusion of the season hardly a surprise for any who follow youth soccer. This Blues team has been so dominant this season that they finished the campaign with an average of over five goals scored per game. Solar, the 2016 U14 USYS National Champions, were the closes thing to a worthy challenger that Blues have seen recently. The champions were eager for the challenger, but the Blues attacking trio of Reilyn Turner, Trinity Moyer-Rodman, and Simone Jackson proved to be too much even for that Solar storied defense.

The Blues’ style of play of high-pressure and quick distribution is forcing other teams to improve in order to compete. The Blues’ plus 147 goal differential at the end of the season is evidence that not many teams could meet that challenge. Saturday’s masterpiece - which was a bit of revenge as Blues head coach Greg Baker referenced as the last time this group lost a game, the USYS championship last July - was a fitting conclusion to what the winning group had been working together to achieve over the past few seasons. The group executed in the important moments and made the opponent work hard for any semblance of success in the tussle.

Midfield standout Tatum Lenain scored the opener in the first minute of the game. Solar spent the final 20 minutes of warm-up prior to kick-off working on dealing with aerial balls against the back four. The preparation helped the group knock down the first cross of the game, but it landed with Lenain who hammered it home for her second goal of the weekend.

The opening goal only increased the intensity of the pressure from Blues Turned made it 2-0 Blues only a few minutes later.

Solar tried to stick to the game plan of building around the pressure with quick passing and clever movement off the ball, but the hustle and commitment of the Blues attacking trio in defending is nearly impossible to replicate in training. And the Blues defense rarely keeps the ball long enough for the opposition to find a shape and take a breath.

Moyer-Rodman scored in the 20th minute on her first chance of the game. The forward missed the 6-0 win over Slammers in the semifinal due to injury. She hardly looked like she was hampered on Saturday, as she buried her first shot with expert precision.

The best chance for Solar came late in the first half when Alexis Missimo and Trinity Byars linked up through the center and sent Byars in behind the defense but she could not convert the chance.

With a 3-0 lead at the break, the Blues were in prime position to finish off the game in the opening minutes of the second stanza with the wave of attacking talent that ill be remembered fondly in the history books. However, Missimo had the first chance after the teams switched ends and looked like she had pulled one back, but a tremendous diving save from Ryan Campbell kept Solar off the scoreboard.

Moyer-Rodman answered back with her second goal of the game and put Blues up 4-0 in the 50th minute of the National Championship game. Jackson made it 5-0 in the 55th minute before Solar grabbed one back in the 57h via No. 6 off an assist from Byars.

Jackson added another for Blues to make it 6-1 as Blues seemed to just be teeing off on the net at will through the final stages of the game.

Missimo grabbed her consolation goal, a tremendous bending effort from near the corner of the 18-yard box to the inside of the far post, to make it 6-2 with eight minutes left. Blues are never satisfied with a score until the final whistle and kept pushing for another one. Alexandria Wright took the honor of scoring the final goal of the game as the utility player was rewarded for a great weekend with a goal in the 77th minute.

Blues celebrated the title with fans and family rushing the field upon the final whistle from the center referee. The champions ended the weekend with 13 goals scored and only two conceded against the best that the rest of the country had to offer.

A goal from Sydney Richards and Reyna Reyes helped FC Dallas snag the ECNL National Championship in the U16 age group. Richards’ epic performance in the final helped the Texas side capture the top honor.

However, it was the defense of Katie Odum, Samar Guidry, Shelby Craft, and Zaria Stevenson that allowed FC Dallas to get to Saturday. The back four for FC Dallas were terrific all weekend in San Diego with great organization and impressive commitment to shutting down attackers in 1v1 situations.

Alexandra Winstanley grabbed the opener for FC Stars with a quality finish. Richards equalized on a quality effort three minutes later and the two teams went into the break even at 1-1.

Reyna Reyes netted the game-winner early in the second half, and FC Dallas effectively killed off the game through the later stages of the game with that stellar defense.

It was a testy clash in the U17 battle as both Hawks and Crossfire brought their best to the last game of the 2016-2017 ECNL season. Crossfire was the more aggressive team in the attacking third in the opening part of the game.

The Washington club had a few chances to snag an opener during the first 10 minutes of the game. Winger Mallaika Tomar was all over the Hawks defense and delivered a pair of crosses that just needed a touch to push Crossfire ahead early.

However, Hawks took the early lead. It looked like Kelsey Adams put the final touch on a corner kick service that was rattling around in the box before crossing the line for the opening goal of the game.

Crossfire responded with a similar goal 13 minutes later when Katelyn Duong whipped in a terrific corner kick that looked like it went directly into the goal, but may have taken a deflection off the head of Britney Weedman.

Crossfire pushed on for the go-ahead goal prior to the end of the half, but the squad was a bit wasteful with chances and the Hawks defense and goalkeepers did well to make life difficult on Sophie Hirst, who was terrific in the semifinal win over Slammers.

Hawks took the lead in the 51st minute when Natalie Viggiano’s free kick fooled the Crossfire defense and goalkeeper and end up hitting the back of the net. The Crossfire side looked like it was waiting for the referee’s whistle, but Viggiano struck the ball quickly and put Hawks ahead.

Camryn Evans made it 3-1 Hawks in the 78th minute when she was rewarded for a great game with a classy finish and the game-winner. Evans battled all game against a physical Crossfire defense and she did well keeping the ball under control against stiff competition.

Crossfire never really seemed out of the game. The Washington team was generating chances, but fell into a habit of serving the ball into the goalie’s glove far too often in the closing moments of the game. The chaos in the box led to a penalty kick in stoppage time.

Hirst converted the kick from the spot and made it 3-2, but the final whistle followed seconds later and Hawks, the No. 30 seed entering the playoffs, dog piled on goalkeeper Maciah Lipsey after claiming the crown from the U17 age group.

For Hawks, it was a dream three-week run. The team was not expected to make it out of its group in Rockford during the first stage of the playoffs. The group vastly exceeded expectations in the playoffs. It was a collective effort that put Hawks into the history book as the National Champion. Hawks coach Derek Williford did a masterful job at preparing the group and making them believe in each other, which showed this weekend in the semifinal and final.