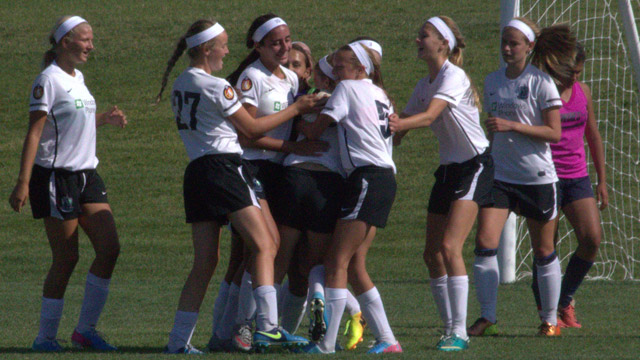 AURORA, Colo. – Coaches called Sunday the survival of the fittest at Aurora Sports Park in the NPL Champions Cup Semifinals.

It was a day where altitude, injuries and the fatigue of playing for four consecutive days were just a few of the things teams fought through on another 90-plus degree day.

And whether it was decided by an overtime goal or an unwelcome crossbar, below are highlights of the semifinals games that sent some teams into Monday’s NPL Championship and others to Denver International Airport for a long flight home:

St. Louis didn’t have the momentum or the most talented player on the field headed into overtime. But its players weren’t fazed. They’d been in this spot before during this tournament – in fact, they’d rallied from worse. 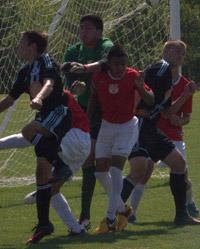 Still, that didn’t make Sunday’s win any less exciting for them. Two red cards and nearly two hours after the start of the game, forward Riley Patterson touched the ball into the net from 4-yards out in overtime to help St. Louis stun the New York Red Bulls 2-1 and grab a spot in Monday’s NPL Championship Game.

St. Louis coach Blake Decker just had to settle his team down first.

“We’ve been fighting back all weekend. We trailed 1-0 the previous two days so we were used to nerves,” Decker said. “We needed a couple minutes to settle down, but then I think we were the better team at the end there.”

And they proved it. Ten minutes short of heading into penalty kicks, a cross landed at the feet of Patterson, who pushed it into the left side of the net.

“It was a war,” said Greer, who fell to his knees in astonishment at the final whistle. “They put us through a war out there.”

In regulation, Clayton Pearson gave St. Louis the lead with an early second-half goal before Greer finally tied the game with a booming kick atop the box after hitting two the post at two different times earlier.

U14 FC Dallas has always been the underdog in their organization. At least that’s what they call themselves.

See, FC Dallas’ U18, U17 and U16 team has always had more success than the U14ers. And frankly, Francisco Molina’s bunch was tired of that.

So Sunday, they made another step in changing that. FC Dallas Pre-Academy rallied for two-consecutive goals after giving up a game-tying goal in the 60th minute to beat Weston FC Pre-Academy 3-1 and earn a spot in the NPL Championships Cup Finals.

Molina took a big sigh after the game. He knows it’s never easy.

“They played us the way we want to play. They were great,” Molina said. “They would not go away and just kept fighting. They made it happen.”

With the game seemingly in hand, FC Dallas’ defense let Weston FC Pre-Academy midfielder Matias Barraza slip behind and rope a goal into the left of the net to tie the game.

“That was the goal we were looking for after we gave up a terrible one early,” said Weston FC Pre-Academy coach Victor Musa in reference to Dallas’ 15th minute goal by Duncan James. “But we battled and battled, and finally, we had the momentum.”

It didn’t last long though. After a controversial call set up a free kick, Austin Ashley took a shot off the cross bar and pushed it back in to give FC Dallas the go-ahead score with 6 minutes left in regulation.

“We were startled after they scored,” Ashley said. “We had to just tell ourselves we had plenty of time and we could get another one.”

Alejandro Zendejas added FC Dallas’ third goal in the 68th minute to ease his team to the final whistle.

PDA reaches championship game in U13 and U15

The game was as snug as the bumping play on the field before a controversial penalty in the box gave PDA the roomy lead in its eventual 3-0 win over the Chargers SC.

It started when Travis Gould took the penalty in the 60th minute after receiving a long ball inside the box before Josh Burnett gave PDA the two-goal advantage with the ensuing penalty kick to help lift the New Jersey into the championship game.

Afterward, the Chargers and its visibly upset coach Tim Mulqueen were left fuming. It was a tough one to swallow the coach said.

But after looking back on a tournament, one that saw more success than failure for the Chargers, Mulqueen tried to find the silver lining.

“It’s unfortunate that they made that call, but we had a fantastic tournament. And maybe it is good for these players to go through something like this now and deal with it,” Mulqueen said. “PDA though, honestly, they were probably the better team. They were by far the best team we’ve played.”

PDA’s Evan Godfrey also scored on a penalty kick to start the game and Justin Jamie scored late to add some cushion.

PDA 1997 had chance after chance Sunday but kept coming up empty.

Finally though, in the 70th minute, Blalock headed in a cross from 6-yards out to give PDA the 1-0 win over Albertson SC 1997 and a trip to the finals.

Keeper Scott Forbes recorded his third shutout for a PDA team that has outscored its opponents 16-0 over the first four days of the tournament.

“We are feeling confident,” said Blalock, who has a U15-lead eight goals in the tournament. “We need to just keep doing what we are doing and score more goals than we did today.”

U13 Girls’ semifinals come down to the wire

So they weren’t surprised the game was even after 58 minutes. But then, Storm Copa’s Emily Sloan rolled a ball past United’s keeper Makena Gordon in the game’s only score as the hometown team grabbed the 1-0 win and a place in the finals.

“(United) did a really good job playing us,” Storm Copa coach Danny Bills said. “For us, we now have to figure to conserve some energy and finish it up.”

North Rockland Sting didn’t lose last season back in their New York league. In fact, the Sting had only given up one goal through those seven games.

But Sunday, the high-level talent of the NPL Champions Cup’s teams couldn’t have been clearer as the Sting lost their second consecutive game when they bowed out to St. Louis 2-1 in overtime.

The winner came 2 minutes before the game was headed to penalty kicks when Sophie Scott told herself she wasn’t going to pass. Instead, she took on three defenders and looped the ball over Sting keeper Stephanie Velez to give the Elite the win.

“I told them going into overtime that someone would have to step up individually,” St. Louis coach Steve Pecher said. “I’m glad Sophie did that for us.”

U16 championship game will be a battle of the keepers

CZ Elite keeper Juan Ramirez stayed calm and collected in a game that was anything but.

Ramirez held on for the shutout and Adam Eaton scored twice in CZ Elite’s 3-0 penalty-filled win over the CFC Azul Juniors.

“We need to stay composed,” Ramirez said. “We’re confident in where we are though, and we’ll take that into tomorrow.”

West Florida Flames keeper Sean Caulfield didn’t fade into the breathlessness of the spotlight or the altitude.

His game just keeps elevating. Sunday he held Blue Valley scoreless with another phenomenal performance in the Flames 1-0 win.

A lot happened for the Flames on this day. Earlier in the morning, the Flames didn’t know if they were even in the semifinals due to delayed games on Saturday pushed to Sunday that would decide their fate.

It wasn’t until Blue Valley’s 3-2 win Sunday morning that the Flames fate into the semis was sealed. Later, they wouldn’t return the favor.

Ever since a heartbreaking loss on Day 1, the Flames have outscored its opponents 6-1 headed into the finals.