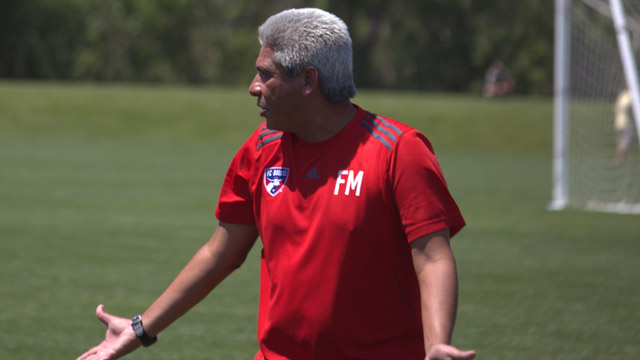 AURORA, Colo. – Funnel clouds snuck late into Day 3 of the NPL Champions Cup at the Aurora Sports Park. But honestly, it was a whirlwind well before any grey cloud emerged Saturday.

On a win-or-go-home day for most, strange weather, extra-time penalty kicks, outstanding performances and tired bodies all showed up on the final day for most of the tournament’s field.

Below are highlights that pushed some teams into the semifinals, eliminated most from the tournament and kept a handful of teams awaiting their fate:

Stars nothing but net in U15 Boys’ action

Oh my how things can change from one day to the next.  The hyped FC Dallas Pre-Academy learned that the hard way when it ran into a suffocating defense and were bounced from the tournament after its 2-0 loss to FC Golden State. 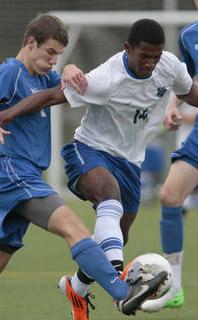 For Golden State, it was the performance it has been looking for since it got to Colorado. Saturday, its forward Parker Hodges scored in the 10th minute to start it off, keeper Brian Espinoza made two jaw-dropping saves early in the second half to keep the lead and Jake Anderson put the game away with his goal in the 72nd minute.

“This game was a little nerve racking,” Espinoza said. “You knew one little mistake, especially by me, could completely change the outcome of the game. I knew I had to get those first couple saves out of the way and then I’d get into the groove a bit.”

His coach Henry Cabral on the other hand was just glad to see his team bounce back after what he called “a lucky win” the day before.

“We did our homework on (FC Dallas) and we came out and executed,” Cabral said. “We needed this or we were done in this tournament, and we were headed home. Fortunately, we got it and we’re staying around.”

FC Dallas is not. After coming into Saturday outscoring its opponents 9-1 through the first two days, Francisco Molina’s bunch is headed home after his offense could never get into a rhythm.

FC Golden State will face the Chicago Magic PSG in the semifinals Sunday.

Elsewhere in U15 Boys: Forward Jalil Blalock scored the hat trick, James Murphy and Jassiem Wahtuse each added another, and PDA 1997 (N.J.) continued their dominance with a 5-0 win over DMS Academy 11 (Calif.).

Netminder Scott Forbes also grabbed his second shutout in as many starts.

“Our defense has been so good you don’t get too many shots on you,” Forbes said. “The main thing I have had to do is just communicate and stay focused.”

It’s worked so far. PDA 1997 has outscored its opponents 15-0 through three days.

Tornado warnings keep U16 Boys’ results up in the air

In front of the net.

The keeper allowed two goals late in the first half before rebounding with a shutout performance in the second half, and teammate Adam Eaton grabbed the lead back in the 60th minute on his second goal of the day to help CZ Elite beat the Lancers 3-2 to move into the semifinals.

“We allowed a couple weak goals late in that first half, but we showed how much we wanted it there in the second,” CZ Elite coach Cherif Zein said. “Juan was fantastic for us down the stretch.”

And then some. Ramirez made one big save after another, but none bigger than when he robbed Stephen Hernandez of his fourth goal of the tournament, and second of the day, on a breakaway attempt in the 65th minute.

“I saw him coming in fast so I ran up at him and dove,” Ramirez said. “Luckily I got a piece of it and knocked it away from him.”

The Lancers were eliminated at the final whistle, but its coach, Ray Franklin, said he couldn’t be too down on his team after the tournament.

“I thought we played alright and did a lot of great things,” Franklin said. “Unfortunately in that second half we fell asleep for a minute and they took the lead for good. They are a great team over on that side though, and I wish them the best going forward.”

CZ Elite awaits its opponent for the semifinals.

Elsewhere in U16 Boys: Goalkeeper Sean Caulfield and the rest of the Florida Flames will have to wait a little longer to see if they are headed to the semifinals after a tornado warning delayed the finish of four of the six U16 Boys’ games Saturday.

Before the storm, the Flames dominated TyneCastle FC (Wash.) 3-0 earlier in the day thanks to two goals from Jacob Goodall and another phenomenal performance from Caulfield.

“We finally helped Sean out today,” Goodall said. “He’s saved us throughout this tournament so it was good to get him some goals.”

Sandwiched between Goodall’s two netters, Zach Carlson heaved a 35-yard dart that slapped the top of the net.

“It was awesome,” laughed Caulfield after the game.

The Flames need the matchup between Manhattan SC Paris Saint-Germain (N.Y.) and Sporting Blue Valley to result in a win or loss. If the match ends in a tie the Flames would be eliminated.

U13 Boys’ semifinal bracket decided by the slimmest of margins

“That’s the way it goes sometimes,” said FC Golden State coach Josh Henderson whose team was eliminated after their 2-2 tie to PDA. “We thought we had it.”

So did FC Golden State forward Marty Raygoza. He thought he had the game-winner when he splashed the back of the net at the 70th minute mark with a dart from 10 yards out. During the celebration he was ear-to-ear with excitement thinking FC Golden State was headed to the semis.

But moments later, in extra time, Evan Godfrey knotted the game up on a penalty kick to help PDA 1999 hold to a tie and leapfrog FC Golden State in the standings.

PDA will play Chargers SC (Fla.) Sunday for a spot in the championship.

Elsewhere in U13 Boys: Alonso Molina scored late to propel FC Dallas into the semifinals. His game-winning shot from just left of the box trickled in to beat Sereno SC (Ariz.) 2-1.

U16 Girls Day 3 games not over yet

Fallon Sheridan was one of seven Rush players to score Saturday in a game that has been delayed at the 68th minute mark due to a tornado warning.

Officially it’s not over, but Rush coach Steve Davis is confident his team is headed to the semifinals after another dominant performance.

“We’ve done great things so far on and off the field here,” Davis said. “Our team chemistry has been phenomenal and we’ve been doing stuff back at the hotels to help us once game time comes.”

The Rush isn’t satisfied though. Captain Sofia Griff, who also scored Saturday, said her team can’t let the Rush’s 15-1 scoring advantage through two-plus games in the tournament go to their heads.

“We have to keep our intensity up and keep the momentum flowing, because if we get in a tight game we have to be ready for that too,” Griff said. We will be in closer games and it starts now to get ready for them.”