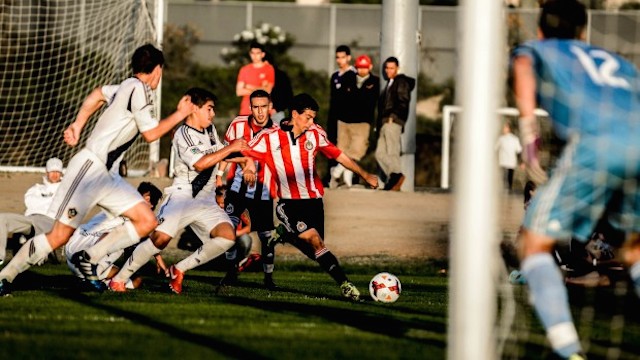 High school soccer is in the throes of its winter season, which inevitably means the involvement of most of Southern California. Since so few state associations play high school soccer in the winter, this becomes something of a showcase for SoCal, which probably has the highest density of next level quality players in the country. Arguments abound, of course, but that’s a fairly easy argument to make.

The residual impact of that talent runoff means the high school soccer is perhaps the highest quality of anywhere in the country. And in the post-2012 Development Academy world, that means the Los Angeles area especially is home to some of the toughest internal struggles among top players.

That is, whether to stay in high school or jump to a DA club. The decision is still relatively straightforward for players looking to go to the next level, even in a place where high school soccer is played at a high level. That struggle hit home recently for two players on opposite sides of the MLS academy spectrum in Ivan Gutierrez (Chivas USA) and Dakota Havlick (LA Galaxy). Both recently talked to The Press Enterprise about their decision to play DA ball over high school, and both considered it a positive step.

“No regrets at all,” Havlick told TPE’s Dennis Pope. “At the end of the day academy soccer is going to get me where I need to go.”

In both Havlick’s and Gutierrez’s cases, that’s UCLA for now. Havlick is committed to the Bruins in this 2015 class, while Gutierrez has his name on UCLA’s list for 2016. Havlick is our No. 34-ranked player in Southern California, while Gutierrez is No. 80 in the IMG Top 150 class for next year. Needless to say, both have prospects stretching beyond the club level, and UCLA, which spends much of its time recruiting top academy players. The caveat there, of course, is that they could jump to the pros at any time before arriving on campus.

In Gutierrez’s case, that could well happen.

“I’m aware that if I sign a professional contract I would no longer be able to attend UCLA,” Gutierrez told Pope, “so if an opportunity came about, it’s obviously a difficult decision I would have to make.”

Just another example of a back-and-forth discussion that continues to take place in living rooms across the country.

Despite the fact that boys soccer’s been partitioned between the Development Academy and high school, the girls game remains an open range. There’ve been rumblings that the ECNL, the girls answer to the DA, might one day go to a similar model. According to ECNL commissioner Sarah Kate Noftsinger, the organization has already considered it as a viable option. Whether or not it follows through at any time in the future is another matter.

So while the ECNL is undoubtedly the place to get the most consistently competitive games against future college studs, high school is still a fine outlet to do the same. That’s born out in the quality commitments that still filter through the high school game, and several hit this week.

You might not expect it on the bayou, where swamps and lowland marshes keep temperatures relatively temperate throughout the year. That’s perhaps why Louisiana, one of the country’s southernmost states, is also one of the only states to play soccer in the winter. But that’s butting up against scrutiny this year as the northern edges of the state deals with freezing temperatures.

Louisiana is up against several changes this week, including one that could partition the state’s classifications into four sectors instead of the current three. But the most intriguing would be the switch to an entirely different time of year, either the spring or the fall, which is when the vast majority of the country plays its high school soccer. Indeed, Louisiana could even go to a split fall/spring calendar where boys and girls play at different times of year, which is already done in a number of states.

As with any measure, it has its proponents and detractors. Some say the current format is fine, citing the state’s generally warmer winter climate and rare dipping temperatures. But others, especially those in the northern parts of the state where temperatures routinely plunge toward freezing this time of year, would like to see a change considered.