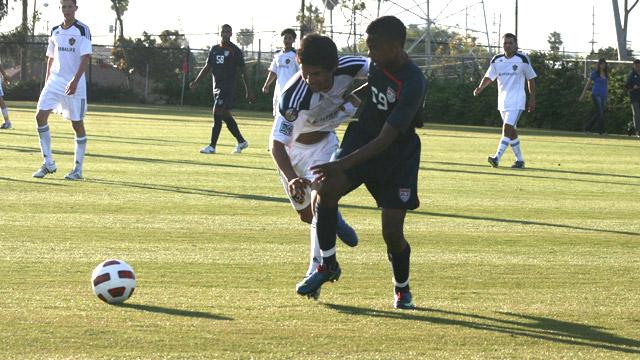 Carson, Calif – It wasn’t the best day for the United States U15 Boys National Team. The team dropped both its games at the Home Depot Center and a player was taken to the hospital after suffering a leg injury.

The U.S. squad, split into two teams for the evening, was shut out by U16 Academy teams from a pair of local clubs, the Los Angeles Galaxy and Arsenal FC, losing 3-0 and 2-0 respectively.

Throughout both encounters there were signs that the Americans hadn’t completely figured out how to play with each other just yet. It should be noted that a number of USSF Academy U16 teams are full of players who are actually in the U17 age group. 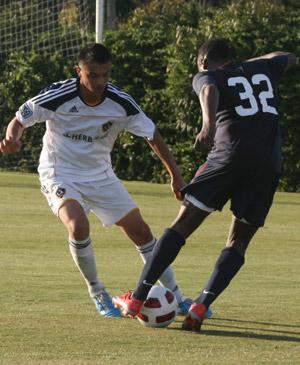 The U15 BNT competes against L.A. Galaxy.

“It was a tough challenge for us in a lot of ways,” said Head Coach Jim Barlow. “We are playing older guys who can play and are on the same page, while you can tell it’s our first day playing together and with a lot of new faces.”

The constant pressure the Galaxy put on the U.S. backline eventually paid off when what seemed like a poorly executed offside trap left U.S. goalkeeper Guyllian Kabal on his own against a Galaxy attacker, making the score 1-0.

The first U.S. threatening chance came before the half after Jorge Calix’s shot ricocheted off the crossbar.

Soon into the second half, the Galaxy doubled its lead after a weak U.S. clearance left an L.A. attacker free to put the ball past the hands of goalkeeper Evan Louro, making it 2-0.

Herber Mejia-Flores, who impressed Barlow, had a great chance to cut the deficit in half. However his well placed shot, from outside the 18-yard box, was blocked by the Galaxy keeper.

The game became out of reach for the U.S when a Galaxy player saw himself open inside the 18-yard box and on the end of a good cross, adding the third goal.

“We are trying to put some pieces together and some guys just looked like it was their first game,” Barlow said. “They were not able to get away with things they usually get away with, and were punished for taking too long to figure things out or were sloppy on the ball.”

The second game against Arsenal started more evenly matched. With the U.S. having the camp’s veterans in the lineup, they were able to keep toe to toe with the academy side.

U.S. goalkeeper Gianni Carillo had some great stops early on in the match, but a quick Arsenal restart from a dead ball and a mental lapse by the Americans saw the U.S. down 1-0 before halftime.

The scariest moment of the night came when Michael Jimenez collided with several players. Jimenez failed to get up, and after receiving attention to his leg from the medical staff; he was taken by ambulance to a local hospital for further evaluation.

After a long interruption the game resumed and became a bit more physical. Both teams had several dangerous tackles, some which resulted in yellow cards.

Before the end of regulation, Arsenal added a second goal when its target striker headed a cross over the hands of U.S. keeper Cesar Jerez, who had come in at the start of the second half.

Regardless the result, Barlow saw a bright side to the second team’s performance.

“I would say that just about everyone on the field in the first half was very solid,” he said. “Vernon Bailey (Dallas Texans) had a good game playing on the right and then sliding centrally in the second half. He was pretty much breaking up plays and did pretty good defensively.”

With two days of training and two matches already under its belt, the U.S. squad will have to regroup and analyze where its weaknesses lie, in order to get the most out of Wednesday and Thursday’s training.

“There a lot of different things you can pick up from today,” Barlow said. “In the first game one of our biggest issues was that we had a hard time getting the spacing right.”

“All of our midfielders were coming centrally and it was putting a lot of pressure on our outside backs because there wasn’t enough help when they were trying to cover the winger and the wide back coming forward.”

Barlow also emphasized that the transition from offense to defense must be faster if the team wants to be successful.