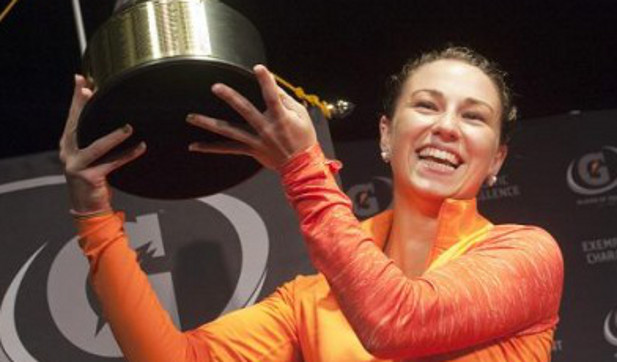 Morgan Andrews is an all-state [American] football kicker, the U17 Women’s National Team captain, and now the 2011-12 Gatorade National Girls Soccer High School Player of the Year. It is not the normal list of accolades you would find on a teenager’s college application, but then again, Andrews is not average.

The exceptionally gifted midfielder has set the bar pretty high for herself and she still has another year in high school to continue to rack up the awards.

“I think I did set the bar pretty high, but I am absolutely willing and planning to set an even higher bar,” Andrews told TopDrawerSoccer.com. “Hopefully, I’ll be back here next year.”

Here would be the 10th Annual Gatorade High School Athlete of the Year awards ceremony in Los Angeles on Tuesday night. Andrews was one of the six female finalists up for the top honor Gatorade awards to scholastic athletes. 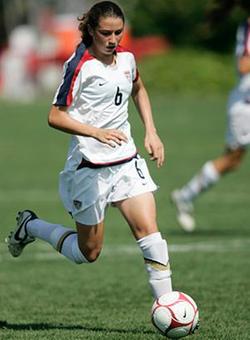 “This experience is so amazing,” she said with a huge smile. “I came into Hollywood without knowing any of the athletes, but I’ve already made some awesome friends. We are just going to continue this relationship beyond the awards. I am surrounded by some great people.”

Among those people that Andrews met during the ceremony was former U.S. Women’s National Team star Brandi Chastain, who was there as a presenter.

Chastain, when asked about what she would leave as advice for Andrews moving forward, cited having purpose in every day at the practice field.

“As far as soccer goes, everyone can talk about the technical side of the game, but for me it is about thinking every time you go to the field, think it may be the last time,” Brandi Chastain said. “It is about having intent. Lisa (Leslie, basketball star) said it on the stage, set a goal. And make sure you work on that goal every day.”

Setting goals does not seem to be holding Andrews back at this point, the U17 WNT leader has set her sights on a World Cup title next.

“I really do think we have a good shot at winning the World Cup,” Andrews said about the upcoming U17 Women’s World Cup in Azerbaijan in late September.

Before thinking too far in the future, Andrews still had a few more days in California as part of the award program, which included a trip to the ESPYS on Wednesday. She knows that with this exposure there will be even more attention devoted to her progress, but cherishes the chance to set an example for others.

“It is an honor to receive the award because I get to be a role model for younger athletes.”

While the glitz and glam of the week left stars in her eyes, Andrews was fresh off a difficult decision.

“On Thursday [July 5], I de-committed from Boston College,” she explained about her recent change of heart. “I realized that it was not the right school for me, it was not the right fit. I was 14 when I committed and I guess it just took a few years of growing up to realize that I can get away from home and I can experience the college life.”

The New Hampshire-native decided to change her commitment to Notre Dame and join Randy Waldrum’s group in 2013.

“Even though it [South Bend] is far away from my family, which is a con, I am absolutely willing to go to Notre Dame and become a better player. I think Notre Dame will allow me to do that.”

Irish fans will have to wait one more year for Andrews, as she is only the second non-senior athlete to win the Gatorade National Girls Soccer High School Player of the Year.

How could she out do herself for her senior season? Perhaps win the award for [American] football too?

“I hope so,” Andrews said with a chuckle.