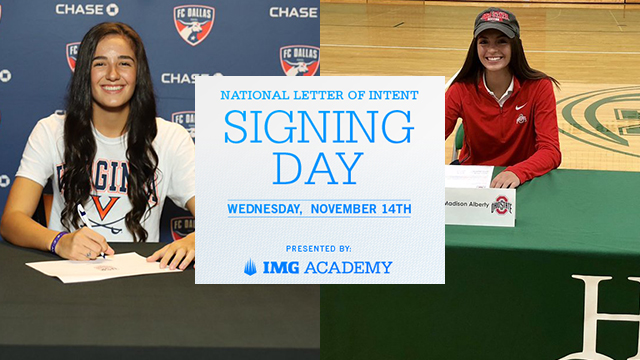 Although the official soccer signing period started in November, many individuals in the Class of 2019 and college programs are still using the traditional first Wednesday in February as a celebration day.

While the live blog is set to be updated below, recruiting coverage will be refreshed every month -- so be sure to bookmark this page.

7 p.m. -- Some of the classes announced today: Portland, Idaho and LSU, all revealing their initial additions for the class of 2019.

2 p.m. -- Butler is using today's Signing Day to announce its class. That include Wilmer Cabrera Jr., the son of Houston Dynamo head coach Wilmer Cabrera. Originally a top ranked recruit in the class of 2018, Cabrera, Jr. took a gap year to play at RGVFC. He'll be one of the top attacking freshmen to watch this year.

12 p.m. -- Already announced back in November as part of North Texas's Signing Class, Allie Byrd is a two-sport star from East Texas native heading north. She took part in a Signing Day ceremony today, and will play soccer after enjoying a standout high school career in that and basketball.

9 a.m. -- The early signing window has been open for almost three months in college soccer.

But some are set to check in on what has been the traditional Signing Day, the first Wednesday in February. While we wait to see if anything changes today, catch up with all of the 2019 recruiting class announcements for men's and women's DI soccer.

There's also the January editions of the men's and women's recruiting class rankings, which will be updated every month between now and August.

And send us your photos so that we can continue to fill out the National Signing Day Photo Gallery, even if your Signing Day ceremony took place last November.

Check back today to see if any news trickles out.

1 p.m. -- Still here two weeks after the signing period opened. We'll duck back in from time-to-time and refresh this page. UC Irvine announced its 2019 recruiting class, which currently holds the No. 1 spot for men's DI programs.

12:30 p.m. -- Almost a week later and news is still breaking about recruits for 2019. Will Sands is one of them, as the Top 150 recruit will join Georgetown next year.

12:15 p.m. -- Stanford begins it quest for a fourth straight national title on Sunday, hosting a second round matchup against UC Irvine. The Cardinal, whether or not they win this year, added firepower last week in the form of Ousenni Bouda and Gabe Segal, two of the best strikers in the class of 2019. The 2017-18 Gatorade National Player of the Year should be one of the best forwards in college next fall.

12 p.m. -- One of the many unique wrinkles of the new date of Early Signing Day opening is the early enrollees won't have started until January (obviously). So, like this North Carolina FC release highlights, college soccer fans may have a better understanding of which players head to school early.

11:45 a.m. -- Bigger signings are coming in from pro academies heading to men's Division I. Along with Michael Pellegrino, who is committed to Notre Dame, Kendall Edwards has the potential to be a star for NC State in the fall.

The letter is in! Welcome to the Wolfpack, Kendall Edwards! #GoPack #ncsu pic.twitter.com/87i5nP9kHt

10 a.m. -- Yesterday did see some of the U.S. Under-17 squad submit their NLIs. Both Mia Fishel and Sunshine Fontes were announced by UCLA in the afternoon yesterday. The pair should provide some instant offense next fall for the Bruins. Kate Wiesner, not inclued on the team due to injury, and is the No. 1 player in the class of 2019, signed for Penn State.

9 a.m. -- It's a new day but the early signing period is just getting started. Jumping into the action is Florida, after a disappointing season by their lofty standards. This year's freshmen class will need to make a big impact.

NLI are starting to coming in! Let's welcome the new additions to 🐊⚽️!

8:08 p.m. -- Time to unplug for today, with much to come, both from at this page and the rest of topdrawersoccer.com. Be sure to get involved if you haven't already and check out the Signing Day Gallery.

7:01 p.m. -- It's been awhile for sure, though news continued to trickle out this afternoon. Speaking of players that might turn pro, Kristopher Shakes signed on with Penn State though watch this space to see if he ends up making it to State College next fall.

4:07 p.m. -- News is lighter on the men's side of things, which we've pointed out a couple times today. However, one of the top recruits for 2019 to already commit has submitted his NLI. Stefan Stojanovic will join Saint Louis next year after standout stints with Sockers FC and the U.S. youth national team.

3:02 p.m. -- Expecting to receive a flood of quality from the class of 2019 after missing out on this fall's tournament, the California women's soccer program announced a couple of players on its Twitter feed. The prize prospect is Angelina Anderson, who started in today's World Cup match for the United States. Midfielder Jadyn Shinn should provide a boost immediately as well.

Thrilled to start announcing the newest additions to our roster! ⚽️🐻

First up, a midfielder from Manteca and member of the @ussoccer_ynt U-18 National Team: Jadyn Shinn! #GoBears #CalFamily pic.twitter.com/p7pKvVPbmf

2:26 p.m. -- Both Notre Dame and Penn State have announced further additions to their 2019 classes, as a somewhat slow morning creeps into the afternoon. Again, it's new territory so no a massive surprise. The U.S. U17 WNT has finished its game, winning 3-0 against Cameroon, so it'll be curious to see if any 2019 recruits send in their NLIs.

1:23 p.m. -- Another signing from a men's Division I power is out there. Zach Dedrick will become the third member of his family to play at Notre Dame next year.

1:18 p.m. -- Jordyn Huitema remains one of the top prospects from 2019 not committed to a school (or at least a publicized commitment). Her teammate Ally Remington will look to continue the tradition of Vancouver Whitecaps' products heading to Division I schools and make an impact at Washington. This thread has the entire list of players heading from Vancouver to NCAA schools.

12:55 p.m. -- Ohio State's lined up a solid recruiting class, which has been bolstered by the confirmed signing of Ariella Pitty, an in-state standout for Ohio Premier.

12:35 p.m. -- There are still plenty of growing pains in the Girls Development Academy, though programs are sending talent to college programs of all levels. The Seattle Reign Academy announced that seven players are heading to school from their current U19 squad.

12:23 p.m. -- Men's Division I programs aren't sitting out today entirely. California is bringing in a U.S. youth national team goalkeeper into the mix next fall.

12:15 p.m. -- Notre Dame announces its first signee, as No. 21 ranked recruit Kaylssa Van Zanten is heading to South Bend. The ACC program missed out on this year's ACC tournament.

12 p.m. -- As the U.S. U17 WNT begin their World Cup campaign, a Top 25 recruit has submitted her NLI. Coriana Dyke, heading to Penn State, is official. Whenever their entire class is announced, the Nittany Lions are likely to top the recruiting class rankings.

11:15 a.m. -- Foreign additions are some of the final pieces of the puzzle, and Signing Day is sometimes the first time these see the light of day. While not yet announced officially by their future programs, Tennessee is expected to add French youth national team player Sonia Ouchène, who plays for Valencia in Spain. Also crossing the Atlantic are Hannah Gardner (Chelsea Ladies FC) and Megan Mackey (Brighton) who are heading to Harvard.

11:05 a.m. -- So far, it's been quiet from the men's side of things. That could be for more than just the reasons mentioned below, as teams prep for the Division I tournament or perhaps even winding down games that wrapped up over the weekend.

10:30 a.m. -- One interesting story line to watch for today is the number of top men's recruits signing their NLI. The combination of a new date for the early signing period opening and the professional opportunities that come to elite men's college recruits, it's going to be something to keep an eye on.

9:30 a.m. -- FC Dallas is one of the first clubs (along with FC Virginia, it's worth mentioning) to jump into the mix. With players heading to a number of top programs like Virginia, Harvard, Penn State and North Texas, expect to see these players have a significantr impact next fall.

Super proud of all our @FCDallasYouth athletes signing their #NLI today. Congrats to @mattgrubb16 and this special group of @ussoccer_acad young ladies! pic.twitter.com/9wClogyW8o