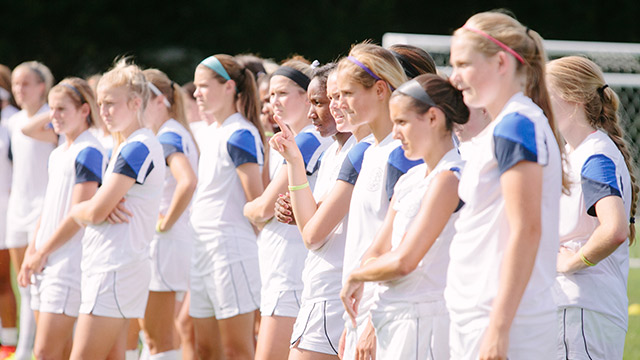 The Nike National Training Camp kicked off on the 1st of August at Nike World Headquarters. The camp hosts some of the top youth soccer talent across the country and it was fitting that Alex Morgan and additional members of the Portland, Thorns and U.S. Women’s National Team showed up before the matches to speak to the girls before the camp got underway.

The whistle blew and both teams started the match in 4-4-2 formations. The match was slow to find a rhythm.  However, minutes into the match Gabriella Carreiro quickly emerged as a stand out player. Starting the match at left wing, she showed great composure on the ball with a dynamic touch that allowed her to run at her defender and make things difficult for Team 2. Around the 25th minute Carreiro took on her defender and passed her and was on towards the back line. Carreiro drove at the center back who had no choice but to commit to the advancing winger and at that precise moment Carreiro gave a weighted 5 yard pass into space for the streaking Jen Westendorf who, with great composure, let the goalkeeper anticipate a far post shot, which allowed Westendorf to slot the ball to the keeper’s near post giving Team 1 the early lead.

Team 2 was quick to respond. The counter effort was led by Reilly Martin, who looked to be playing in a sort of attacking central midfield position. Martin delivered the equalizer in astounding fashion. Receiving the ball about 30 yards from goal, Martin’s first touch was attacking. She drove at the defensive line, having few passing options, and went on the dribble. Within the midst of pressure, Martin showed strength in shielding a charging outside-back and then showed craft with a head fake and deft cutback. With that move she found herself onto goal and slotted the shot far post giving the keeper no chance. Game even.

Onto the second half and Jorian Baucom was quick to play in Martin once again. Martin opened up her hips and curled in the second goal. Team 2 now with the lead. It didn’t stop there as this time it was Kelly Sweeny with the impact. Sweeny took on Carrerio, (who had been moved to right back in the second half) and Sweeny got the better of the match up. Sweeny dribbled at her defender and with speed opened up an angle to shoot. Sweeny with a tough angle was able to make the most of the opportunity and fired home a shot to make it 3-1.

Team 2 was starting to look like the better lineup and the sentiment seeped further when Meghan McCool delivered a great solo goal. A long ball from Team 2’s back line was played into space. Alyssa Baumbick who had a great first half at defensive central midfield now found herself as center back. Baumbick got to the ball first by a split second, but McCool was quick to pounce on the opportunity and with great strength wrested the ball free and when her angle at goal beckoned she fired home yet another goal for Team 2.

Team 2 was flying for most of the second half but Savanah McCaskill and Leah Pruitt were able to deliver a bit of turbulence with 15 minutes left in the game. The two forwards had been playing well together all game with McCaskill dropping deeper to receive possession and Pruitt playing as a true #9 striker. McCaskill received a difficult ball in her own half and with a quick turn found Pruitt. Pruitt demonstrated some nice hold up play, controlling the ball and allowing the firecracker fast McCaskill to streak into space. Pruitt delivered a good ball in, and McCaskill beat the last defender and was onto goal. The keeper came out and the selfless McCaskill passed the ball farpost to the industrious Pruitt and the pair polished off a truly wonderful goal.

Unlike the first match, this got underway from the get go. Team 4 lined up in a 3-4-3 formation against Team 3’s 4-4-2. The more offensively formed Team 4 immediately was on the attack. Jalyn Thompson, who is registered as a defender, received the ball high up the pitch and was one against one with a defender to beat. With a slight feint to the left she exploded to her right and opened up a glance at goal but a tough one. Thompson demonstrated a great touch on the ball when she leaned back and pinged in a nice chip to sail over the goalkeeper’s outstretched glove. The ball met with the far-post side netting and Team 4 was in the lead.

The scoring was coming quickly and the momentum was all Team 4 early on. Only a few minutes after the first goal Megan Massey demonstrated some fine play by starting with the ball on the left wing. She took on her mark and beat her and slotted in a good ball to Katia Novi who fired in a shot but despite the power it was blocked and the ball was live again. Massey continued her run, however, cutting in from the left side and her labor paid off as she found herself picking up the loose ball and slotted a sufficient shot to the far post to double the lead.

The match stagnated for a while as the opposing midfields tried to gain control of the center of the park. Just as Team 3 was starting to establish some decent possession their work started to pay off. The goal started from Sarah Luebbert who’s combo play was solid throughout the match. Luebbert received the ball and on the run down the flank cut back a pass to Julia Bingham who buried the shot to cut the lead down to one.

Team 4 didn’t appear to fazed by the concession as Savannah DeMelo looked to be in complete control of the match. DeMelo was a constant threat to the Team 3 backline. On the dribble she tangled defenders, on the pass she cut them open.  Team 3 began to man mark DeMelo and the resulting unbalance in the back line was enough to open up Team 4’s next goal. Again, Massey was involved in the creation of the play as she pierced the wing and slotted a pass back to Taylor Ziemer. Ziemer knew what to do with the ball in the six yard box and one touched a good finish into the back of the net.

The match ended 3-1. The momentum of the match was back in forth but in the end Team 4 had the more meaningful opportunities in front of goal and they capitalized on them.

The third game of the day for the Nike National Training Camp was played between the Id2 team and a amalgamation of two local teams; FC Portland and Crossfire United. The game was played at Ronaldo Field on the Nike World Headquarters and kickoff was at 5pm.

The match between the two squads was an interesting one. It started off according to expectations with the Id2 squad controlling more possession and forcing some early chances. Catarina Macario was quick to suggest she could make a difference in the match. Driving at defenders she eventually got in a half step behind the defensive line only to be taken down in the box. The penalty was given and Macario went to the spot.  The ref blew the whistle and a rather lackluster penalty resulted. Macario sent the ball wide left of the goal and without much pace and the match remained at zeroes.

Still early in the match, Id2 seemed to be in control. Kiara Pickett was industrious in the middle of the park and created opportunities. In the span of 15 minutes she hit the post twice and had chip attempt beat the keeper but only to sail just over the bar.

The second half was another story. The Local Team began to take control of the game. This was largely due to a change in tactics. The Local Team began to employ a high pressure defense with the forwards chasing the ball all the way to the centerbacks and outside backs. The Id2 squad was noticeably affected by the pressure and their backline had trouble advancing the ball. Turnovers were not uncommon.

With the change in momentum, the Local Team capitalized. Anna Verloo was in hot pursuit of a ball on the right wing of play. She battled Alyssa Malonson for a ball and after some physical play the larger and stronger Verloo came out with possession ten yards out on the right touchline. Verloo took control and dribbled towards the keeper at a difficult angle. With no advancing runs into the box Verloo took the improbable shot and laced it with enough power for it to ping against the keepers inside right calf and trickle into the goal. Local Team 1, Id2 0.

The match continued to go in favor of the local team for another ten minutes until Kori Locksley came back onto the pitch. She had played at right back in the first half but was now employed as a right winger. Locksely looked dynamic and it seemed the difference, if any, would come from her. Within 5 minutes she tore down the right wing and crossed a ball into the box where one of multiple runners tapped the ball into the goal.