Players to watch at the U20 NTC tourney 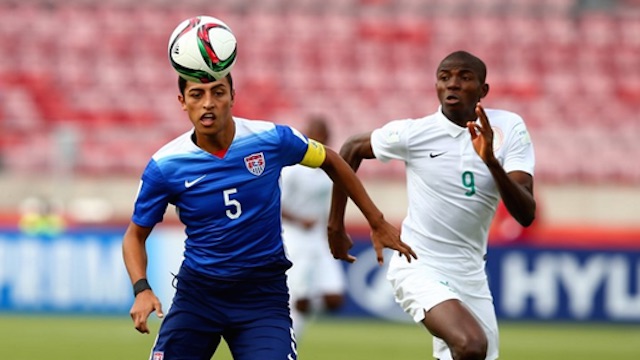 The U20 MNT cycle is young, relatively speaking. We’re still a year away from the next U20 World Cup, and CONCACAF qualifying is still months down the road. The pool is crystalizing, and in more ways than one.

The U20 NTC Invitational is typically a proving ground at a pivotal point in the cycle. We’re still early enough in the process to identify and fold in brand new names and late enough to know the principle candidates to start next year. Everything is still in flux, but coach Tab Ramos certainly is generating ideas already. So it goes in two-year bursts.

The NTC runs from June 26-July 4 in Carson, Calif., and the U.S. faces Costa Rica (June 29), Panama (July 1), and Japan (July 3). Those three matches will provide us with a quality indication of where the next starters are coming from.

Without further ado, let’s take a look under the hood at a selection of some U.S. U20 players to watch - and why - as the NTC kicks off with a not insignificant degree of fanfare.

Ramos only called two goalkeepers into this camp, so we’ll almost certainly see both start a match at one point. Easy money is on Marcinkowski and Klinsmann to trade starts in the first two matches with the better of the two winning the starting gig for the ballyhooed Japan match to finish the tournament. Even if it doesn’t go like that, expect to see both.

On the surface, this isn’t much of a race. Marcinkowski emerged during his freshman campaign at Georgetown as the best underclassman keeper in the nation, and with a stellar senior class graduated, you can easily argue he’ll be the nation’s best netminder as a sophomore. Klinsmann showed some flashes last year at California, but he’s not in the same class. Not yet anyway.

The Nick Rimando-esque Marcinkowski will still have to earn the position this week, and he can help stamp his frontrunner status for next summer’s U20 World Cup with a strong tournament. Don’t count out Klinsmann, of course, but the position is Marcinkowski’s to lose. Which should make for one heck of a battle for No. 1.

The ease of movement between the U17s and the U20s is a constant fixation at the youth national team level. Federations are ultimately graded on how many players they can squeeze through their youth ranks and into the full senior team, and the path through the U17 and U20 World Cups is the easiest way to grade the procession.

There’s still plenty of time for more 2015 U17 World Cup players to make a mark in the cycle in advance of the 2017 U20 World Cup, but for now we only have three to mull over: defenders Auston Trusty and Hugo Arellano and midfielder Luca de la Torre are the lone holdovers on the 21-player roster from last year’s U17 World Cup roster. And Arellano was the only consistent starter.

Trusty was a World Cup gamble on then-coach Richie Williams’ part last year, as he’d only been folded into the U17 mix a few months before the tournament. Trusty had a bad opening match and earned a red card, and that was that. He’s had a quality recovery for the Philadelphia Union academy this year, and he may well earn a Homegrown gig eventually, but he looks like backup fodder here.

Arellano has been fast-tracked from an early age, and he captained the U17 MNT last year. He’s sound organizationally and he makes up for his lack of height with a deft sense of positioning. The Galaxy center back has grown significantly and should challenge for a starting spot this week. As for De La Torre, he’s still installed in Fulham’s youth system and is one of the most promising No. 8 midfielders in the entire U.S. pool. Hopefully he’ll get time to shine in Carson.

There aren’t a ton of foreign-based players on this roster. In fact there are only four: De La Torre (Fulham), Marlon Fossey (Fulham), Mukwelle Akale (Villarreal) and Sebastian Saucedo (Veracruz). Saucedo is on loan from RSL this season and has largely played in cup matches for Veracruz’s senior team. De La Torre and Fossey are both bouncing around Fulham’s academy ranks, while Akale has been impressing for Villarreal’s youth sides for more than a year now.

For Fossey and De La Torre, this tournament marks they first ever U20 call-up, while this is Akale’s first in 2016. Fossey is probably the most interesting of the lot since he’s such an unknown. Born in Hollywood, Fossey moved to the British island of Jersey with his mother when he was four, and he was quickly identified and folded into Fulham’s academy. Since then, he’s been growing in prominence as a swarthy raiding fullback. Call him 2016’s answer to Desevio Payne.

Akale and Saucedo are similar players, and both are rare breeds in the context of American soccer. Akale, a Minnesota native, is a diminutive attacker who can play all along the attacking front. He’s probably best as a Jesus Navas type out wide, using his agility and quickness to either pinch inside or spin in tough crosses. So it fits that he’s been scoring goals and making defenders look silly in Spain.

As for Saucedo, he might be best as a second striker storming at defenders from deeper pockets. The good news is that the U.S. has a rare cadre of attacking threats with technical on-ball ability. That’s not always a given in tournaments like these.

Finally, we come to Sabbi. Maybe the best player on this roster, and almost certainly the best forward.

In an attacking sense, the U20s will probably be heavily reliant on Sabbi at next year’s U20 World Cup barring something unforeseen. He’s one of the few players in this group you can pick out as a sure pick for 2017, and at least right now there isn’t a better forward in the U20 pool. He’s uniquely talented on ball, can work his way around central defenders with his own movement and is positively lethal in the box.

The question with Sabbi is always service. He can create for himself, but he needs a central attacking midfielder to push him into more dangerous positions since he has a tendency to drift. Whether that’s FC Dallas’ Weston McKennie or rising UCLA sophomore Jackson Yueill or maybe even Akale, keep an eye out for who’s doing the majority of feeding on Sabbi’s shots. It matters.

All the nuts and bolts aside, Sabbi is earmarked for big things in U.S. Soccer. He has the potential to be a special striker with as varied and unique a skill set as any No. 9 in the system. After a strong Dallas Cup with the U20s earlier this year, we’ll see if the NTC is the venue where Sabbi becomes an even bigger name than he is now.