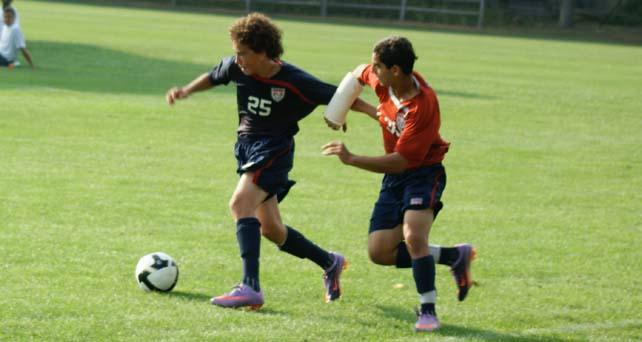 CONCORD, MASSACHUSETTS – As the U.S. Soccer U14 National ID Camp completed its penultimate day here Thursday, there are increasing suspicions that this age group might have a bit of depth to it when it comes to quality.

With a number of lineup changes employed for the coveted Pool Match from Wednesday’s opening day of Pool play, the players on the field exhibited a similar high quality, albeit in spurts, that was shown the previous day. Additionally, the other the two matches on the day, pitting remnants of regional teams against one another, also showcased some good players.

Even after the final day of the event Friday, the staff will go over individual performances and select a team for Thanksgiving. But event at that event, coaches will be watching the players on the regional ODP teams and as our Wednesday article noted, other players through the U.S. Soccer Market Training Centers. 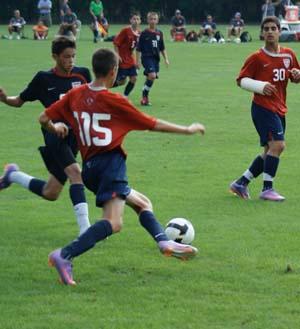 Pool play continues in Concord, Mass.
But there was plenty to pay attention to on Thursday, so read on.

Pool Match: Team Five 2, Team Six 2
There was a lot of good play on display here. Playing on a rain-slicked field after a brief thunderstorm broke the New England afternoon heat, the teams struggled to find a scoring combination in the opening half, despite some good individual play.

Mustang SC’s James Marcinkowski was very good in goal for his team, coming off his line decisively and showing good shot-stopping and handling on the day. Brendan Constantine of Oakwood SC was good again in defense, putting in some tough tackles and closing well on would-be shooters.

Sean Wilson of PDA was a tough tackler in midfield while Shannon Seymour of Chicago Fire demonstrates a good combination of toughness, athleticism and skill in a wide midfield role. Benjamin Swanson of Columbus Crew has excellent footskills.

For Team Six, Dylan Smith has all the tools to make a good goalscorer, strength, good feet, the intelligence to create space for himself and solid ball-striking. Caleb Moore of Discovery SC is quick and powerful on the wing.  Pablo Pelaez of Albion SC is a smart player who showed a lot of good touches on the ball. Coy Craft of Northeastern Tennessee club Fusion FC is a poster child for why ODP still has an important role to play. Craft has been great in midfield here this week, combining good feet with above average soccer intelligence and work rate in midfield.

The game loosened up in the 2nd half, with more scoring chances both ways. Lehigh Valley United and Team Five goalkeeper Cameron Keys made a number of good reflex saves and handles a cross well. Defender Max Stiegwardt covers a lot of space in the back and has good closing speed. Team Six midfielder Amigry Pineda of Fullerton Rangers showed some good passing skill to go with the goalscoring prowess he has displayed this week.

Team Five opened the scoring when Malcolm Dixon played a nice ball for Shannon Seymour, who finished well. The next goal was more spectacular as Seymour played a long ball and Dixon struck it with a professional-quality volley for a 2-0 lead.

Team Six fought back however as Real So Call’s Chet Castellaw played a good through ball for Phoenix-area player Joshua Doughty, and Doughty finished well to make it 2-1. Doughty then turned provider on the equalizer, playing a slick pass for Donald Emerson of Oregon Rush, who scored the tying goal.

Region Two 7, Region Four 1
The Midwestern side had a 1st half to remember, pumping six goals in before a thunderstorm delayed the day’s proceedings for about an hour. Nicholas Hibbeler of Kansas City Wizards opened the scoring with a penalty kick. Chicago Magic’s Calum Bishop hit a 25-yard strike to make it 2-0, then added a penalty of his own to make it 3-0.

Minutes later the best-worked goal of the day came when Bishop fought off a strong challenge and played Thomas Ueland of Lexington Premier down the left. Ueland made a strong run to the end line and then pulled a bullet cross back that Joseph Jones of Baltimore Bays volleyed into the net. Peter Brown Grand Rapids Crew hit a laser beam from 20 yards for 5-0 and then Jones scored another for a 6-0 halftime score.

After the break, Dante Guerrero of Kansas City Wizards added a 7th, while Jesus Enriquez of Northern California scored a goal for Region IV.