Aaron Caprio is the latest player to be wooed by that intimate, yet big-time environment of Portland. The Inter FC (Utah) product joined teammate Matthew Coffey in giving his verbal to the Pilots for the 2013 season. 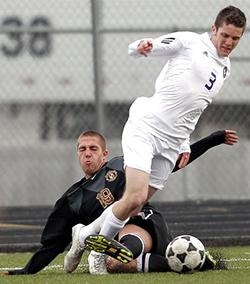 Inter FC has turned into a nice pipeline for Portland, sending more than a few standouts over the past few years – guys like Michael Nielsen, Bronson Boyd and Derek Boggs.

The latest two in line bring a special synergy developed from years of being teammates. Both Coffey and Caprio were named to a recent ODP Boys NCAA Interregional, yet another event where they joined forces.

We’ve previously applauded Portland’s ability to maintain its cozy program style while still competing with the giants. We’ll now interrupt this regularly scheduled program to get some further insight from Portland-bound female star Mikayla Elmer (No. 103 in the Top 150).

“At some programs, good players become invisible and disappear,” Elmer said. “At Portland their players always seem in the national limelight and they have several all stars from their team that go on to play (on bigger stages).”

So, there you have it.

Speaking of top players committing to Furman, Santibanez, of AYSES in Texas will be linking up with the Paladins next season. Santibanez is currently in Mexico playing with his regional squad.

Speaking of international play, Japan product Haru Kent has verbally committed to Santa Clara for the 2013 season. Kent currently attends and plays for the American School in Japan.

Christopher Kroeze (Central Jackson Soccer) has signed with Oral Roberts for the 2012 season.

Phillip Lassiter (AYSES) has signed to Florida Southern for the 2012 season.

Bernard Tume (Arsenal FC) has signed to Valparaiso for the 2012 season.